In April 2017, as Indiana officials began roles in the Trump Administration’s health care leadership, the Foundation invited a group of journalists with a strong focus on health policy and state health reform to participate in a week-long fellowship focused on Indiana’s health care landscape and its approach to expanding Medicaid under the Affordable Care Act. The site visits in Indianapolis gave the journalists the opportunity to hear from a variety of experts and stakeholders on the Healthy Indiana 2.0 program — including financing, enrollment, challenges, and implications for patients, providers, and insurers – as well as updates on opioid and HIV epidemics in Scott County and other rural areas. Indiana Secretary of Family & Social Services Administration Dr. Jennifer Walthall provided details on the Medicaid expansion, how it is working, and the state’s proposed next steps, and the journalists toured primary care clinics that provide dental care, that serve immigrant populations, and that do outreach to jails to enroll inmates in Medicaid post-release. The program also included a tour of an Eli Lilly insulin manufacturing facility and briefings with senior executives of the pharmaceutical company.

The Kaiser Family Foundation published a fact sheet on Medicaid in Indiana and a brief that addresses the state’s Medicaid expansion, An Early Look at Medicaid Expansion Waiver Implementation in Michigan and Indiana. 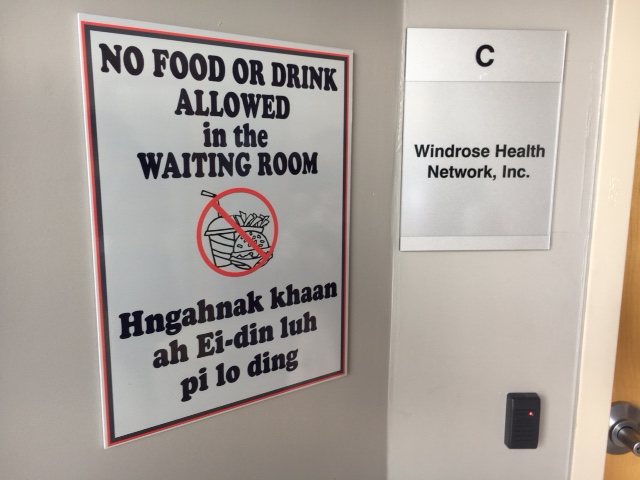 A sign at a Windrose Health Network clinic, which serves a majority Asian community in Indianapolis, addresses patients in English and Burmese.

-“More than half of Indiana’s alternative Medicaid recipients didn’t make payment required for top service,” The Indianapolis Star,” May 8, 2017

-“Anthem, other insurers rushing to keep up with demand of popular HIP 2.0,” Indianapolis Business Journal,” April 3, 2017