New We Are Family Campaign Brings HIV “Home” for Georgians

Statewide Survey Reveals Nearly Half of Georgians have a Personal Connection to HIV; More Than 1 In 4 Black Residents Have Family Member Affected By Disease

ATLANTA, GA, Nov. 17, 2015 – Whether it’s the one you are born into or the one you create, family matters. For people living with HIV, having the support of loved ones makes a big difference in health outcomes and general well-being.

WE ARE FAMILY is a new campaign from Greater Than AIDS and the Georgia Department of Public Health to reinforce the importance of social support for people living with HIV. Produced as part of the Georgia Greater Than AIDS (Georgia>AIDS) public information partnership, the multi-platform media and community outreach campaign profiles families from across the state who have a loved one living with HIV.

Research shows people with HIV who have strong support networks are more likely to get and stay in care, which both improves health outcomes and reduces the spread of the disease. Conversely, fear of judgement and rejection can delay a person from seeking lifesaving treatment or even knowing their status.

“Getting Georgians tested and linking HIV-positive patients with treatment is essential to reducing HIV transmission in Georgia,” said Patrick O’Neal, M.D., director of Health Protection for the Georgia Department of Public Health. “An HIV-positive person is 96 percent less-likely to pass the virus to others if they’re adhering to an appropriate treatment regimen.”

According to a new statewide survey conducted by the Kaiser Family Foundation that is being released today in conjunction with the new campaign, nearly half (46%) of Georgians say they personally know someone living with, or who has died of, HIV/AIDS. More than one in four (28%) Black residents report having a family member affected by the disease.

Georgia has the fifth highest number of HIV/AIDS diagnoses in the country. As is the case nationally, Blacks are the most severely and disproportionately affected of all races and ethnicities, accounting for two thirds (67%) of new diagnoses in Georgia in 2013, according to the Georgia Department of Public Health. While the impact is felt across the state, three counties in Atlanta – Fulton, DeKalb and Clayton – have the highest prevalence rates (per 100,000 people) in the state.

“HIV has touched many lives, yet it’s not talked about even with those closest to us,” says Tina Hoff, Senior Vice President and Director of Health Communication and Media Partnerships at the Kaiser Family Foundation, which directs Greater Than AIDS. “Too many are getting HIV, and even dying, because of the stigma and silence.”

The large majority of Georgians surveyed say HIV “rarely,” if at all, comes up in conversations with friends, family or even intimate partners. Blacks and those with a personal connection to HIV are more likely to report talking about HIV, though most say not often. 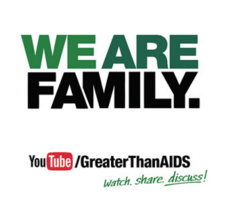 Anchored by a series of documentary-style short videos, We Are Family features a grandmother and her grown son, a college student and his parents, a pastor and his congregation, a recovering addict and his mother, a transgender woman and her sister, and childhood best friends. Their stories provide a powerful illustration of the difference it can make for people with HIV to have the support of family and friends.

In one profile, Masonia, a young mother who was diagnosed when she was pregnant, says of her best-friend Crystal, “she saved my life by showing me love.” In another, Abraham, a pre-med student, shares how his mother checks in regularly to make sure he’s doing okay: “She’s always asking me: ‘Did you take your medications today?’”

A statewide outdoor, transit, radio, TV and digital media campaign promotes local resources to support individuals living with HIV and their loved ones.

Community toolkits – including informational resources, posters, and other items highlighting local services – are being distributed to AIDS service and other community-based organizations across the state to support on-the-ground outreach.

For more about the campaign, informational resources, and to watch the videos, go to: georgia.greaterthan.org 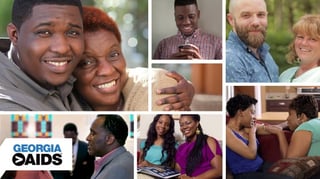 About Georgia Department of Public Health
The Georgia Department of Public Health is the lead agency in preventing disease, injury and disability; promoting health and well-being; and preparing for and responding to disasters from a health perspective. In 2011, the General Assembly restored DPH to its own state agency after more than 30 years of consolidation with other departments. At the state level, DPH functions through numerous divisions, sections, programs and offices. Locally, DPH funds and collaborates with Georgia’s 159 county health departments and 18 public health districts. Through the changes, the mission has remained constant – to protect the lives of all Georgians. Today, DPH’s main functions include: Health Promotion and Disease Prevention, Maternal and Child Health, Infectious Disease and Immunization, Environmental Health, Epidemiology, Emergency Preparedness and Response, Emergency Medical Services, Pharmacy, Nursing, Volunteer Health Care, the Office of Health Equity, Vital Records, and the State Public Health Laboratory. For more information about DPH, visit dph.ga.gov

About Greater Than AIDS
Greater Than AIDS is a leading national public information response focused on the U.S. domestic epidemic. Launched in 2009 by the Kaiser Family Foundation and Black AIDS Institute, Greater Than AIDS is supported by a broad coalition of public and private sector partners, including: major media and other business leaders; Federal, state and local health agencies and departments; national leadership groups; AIDS service and other community organizations; and foundations, among others. Through targeted media messages and community outreach, Greater Than AIDS works to increase knowledge, reduce stigma and promote actions to stem the spread of the disease. While national in scope, Greater Than AIDS focuses on communities most affected.

About Kaiser Family Foundation
The Kaiser Family Foundation, a leader in health policy analysis, health journalism and communication, is dedicated to filling the need for trusted, independent information on the major health issues facing our nation and its people. The Foundation is a non-profit private operating foundation based in Menlo Park, California and is not affiliated with Kaiser Permanente.