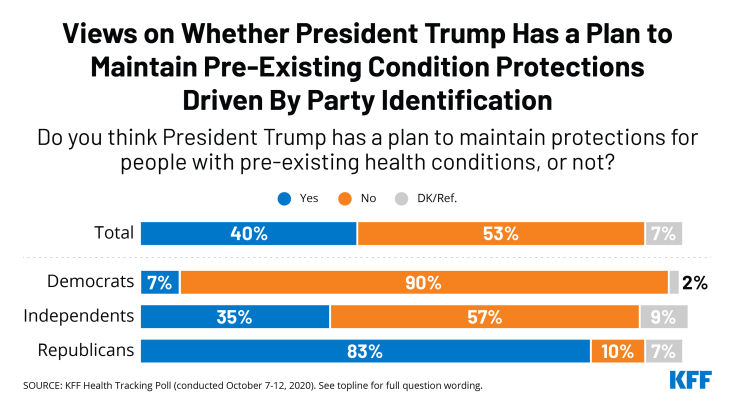 The confirmation process for Judge Amy Coney Barrett, President Donald J. Trump’s appointment to fill the Supreme Court seat previously held by Justice Ruth Bader Ginsburg, began last week with the fate of the Affordable Care Act (ACA) firmly at the center of the hearings. With the Supreme Court set to hear arguments in California v. Texas only days after the election, the nomination of Judge Barret has placed heightened scrutiny on what President Trump’s administration would do to continue the ACA’s protections for people with pre-existing conditions if the Supreme Court invalidates the law.

The October KFF Health Tracking Poll finds that a large majority of the public – including majorities of Democrats (91%), independents (81%), and Republicans (66%) – now say they do not want to see the Supreme Court overturn the ACA’s pre-existing condition protections. The share who do not want to see these protections overturned has increased by double digits from one year ago for each group. While both presidential candidates – President Trump and former Vice President Joe Biden – say they have plans to ensure pre-existing condition protections, more than half (53%) of the public say they “do not think President Trump has a plan to maintain protections for people with pre-existing health conditions,” including majorities of Democrats (90%) and independents (57%). On the other hand, a large majority of Republicans (85%) say President Trump “has a plan” to maintain these protections afforded by the ACA.

In 2020, Trump signed an executive order – a statement of goals — promising to protect people with pre-existing conditions, but has offered no plan to do so. This order is not a binding rule or law. President Trump has not provided further details.