After remaining steady for several months, the share of Americans expressing an unfavorable view of the Affordable Care Act rose to 53 percent in July, up eight percentage points from June, according to the latest Kaiser Health Tracking Poll. The poll also finds that a majority of the public continues to prefer that Congress work to improve the health care law (60%) rather than to repeal and replace it (35%).

The share of Americans with a favorable view of the ACA held relatively steady in July at 37 percent, little changed since March. The share of the public who offered no opinion about the ACA fell to 11 percent in July, down from 16 percent in June. 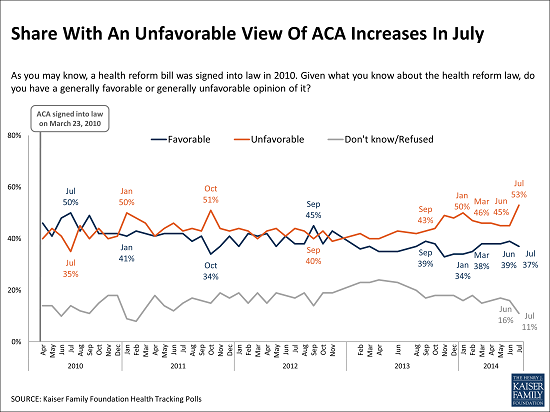 The share of the public preferring to see the law improved rather than repealed has held steady for several months. It was 59 percent in May and 58 percent in April. Similarly, in January 55 percent of the public said opponents should accept that the ACA is the law and work to improve it, while 38 percent said the law’s opponents should continue efforts to repeal it. Even among Republicans (32%) and those with an unfavorable view of the law (36%), about a third would prefer to see the ACA improved rather than repealed and replaced, the July poll finds.

The July poll also finds that four years after the law’s passage, and following the ACA’s inaugural open enrollment period, misperceptions about the law persist.  For instance, about 1 in 4 Americans (26%) believe that people who got new health insurance under the ACA enrolled in a single government health plan, while 37 percent of the public and 29 percent of the uninsured are aware that people had a choice between private health plans. Thirty-eight percent say they don’t know enough to answer the question.

The poll finds that Republicans (34%) are less likely than Democrats (43%) to say that enrollees had a choice of private health plans. Other groups that are less likely to be aware of this fact include those with an unfavorable view of the law (32%), self-described conservatives (31%), and people ages 65 and older (29%).

Most think Hobby Lobby decision will spill over into other areas

A majority of the public (58%) believes the Supreme Court’s decision in the Hobby Lobby case, in which justices ruled that closely-held corporations can cite religious objections to avoid paying for contraceptive coverage as required under the ACA, is likely to prompt employers to try and use religious grounds to deny their workers coverage of other types of health care services, such as vaccinations or blood transfusions.

A majority (60%) of the public continues to support the requirement that private insurance plans cover the full cost of birth control, while about a third (33%) is opposed. Forty-five percent of the public – including 62 percent of women under age 35 — say the Hobby Lobby decision will make it more difficult for women to obtain prescription birth control, while 50 percent disagree. In cases where a woman’s employer does not pay for birth control coverage because of religious objections, about half the public (47%) believes the woman should have to pay for the coverage, while just over a third (36%) believe the insurance company should pay and 14 percent think the government should.

Also available is the July installment of the Kaiser Health Policy News Index, which finds that 59 percent of the public report closely following the Supreme Court’s decision in the Hobby Lobby case, and just over half the public (53%) correctly identifies the Court’s decision in the case. The Index is designed to help journalists and policymakers understand which health policy-related news stories Americans are paying attention to, and what the public understands about health policy issues covered in the news.

The July tracking poll was designed and analyzed by public opinion researchers at the Kaiser Family Foundation and was conducted from July 15-21 among a nationally representative random digit dial telephone sample of 1,507 adults ages 18 and older. Interviews were conducted in English and Spanish by landline (753) and cell phone (754). The margin of sampling error is plus or minus 3 percentage points for the full sample. For results based on subgroups, the margin of sampling error may be higher.