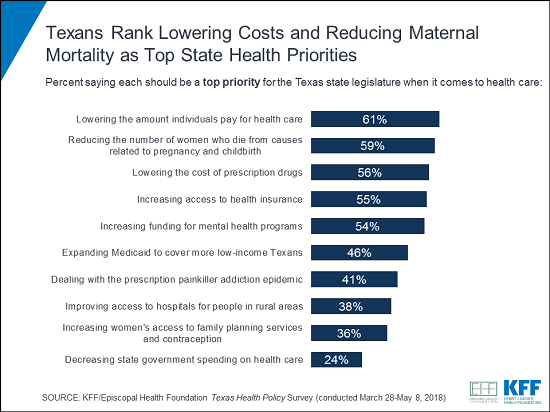 Texas is one of 17 states that has not expanded its Medicaid program under the Affordable Care Act, which requires the federal government to pay the vast majority of the cost of expanded coverage.

Large majorities of Texas Democrats (82%) and independents (71%) support Medicaid expansion in the state, while most Republicans (59%) prefer keeping the state’s Medicaid program as it is today. Lower-income residents are most likely to support expansion, though a majority of those with higher incomes also favor it.

Texas currently has more residents without health insurance than any other state and has the highest uninsured rate in the country (21% among adults ages 19-64, compared to 12% nationally). However, most Texans don’t realize it.

The findings are from the first report in a series drawing on a new KFF/EHF survey of Texans on their views of and experiences around health policy and Medicaid. Future reports will examine health care costs, the experiences of Texans with private insurance, and women’s health care.

When asked about state budget priorities overall, a majority (54%) of Texans say they favor increased spending on health care programs – fewer than say the same about public education (71%) and similar to the shares who want increased spending on infrastructure (55%) and public safety (52%).

Most Texans (60%) say Medicaid is important to their families, and the same share (60%) say the state’s Medicaid program is working well for those low-income residents who are already covered by the program.

Overall, seven in 10 (71%) Texans report a personal connection to someone covered by the Medicaid program – including those who have personally received Medicaid assistance (31%), have had a child covered (11%), or have a close friend or family member who has been covered (29%).

Designed and analyzed by researchers at the Kaiser Family Foundation and the Episcopal Health Foundation, the Texas Health Policy Survey was conducted from March 28-May 8, 2018 among a random digit dial telephone sample of 1,367 adults living in Texas. Interviews were conducted in English and Spanish by landline (439) and cell phone (928). The margin of sampling error including the design effect for the full sample is plus or minus 3 percentage points. For results based on subgroups, the margin of sampling error may be higher.