As Congress and the Democratic presidential candidates continue to discuss Medicare-for-all and other proposals to expand public health coverage, most Americans know little about how the leading Medicare-for-all proposals would reshape the way all Americans get and pay for health care.

While half (53%) think that Medicare-for-all would mean private health insurance would no longer be the primary way Americans get health coverage, a substantial share believe that under such a system, private insurers would continue to cover most Americans (40%) or don’t know (7%). In addition, while 62% think that Medicare-for-all would result in all U.S. residents having health coverage, a significant share (34%) do not think this would happen.

On most other major features of the Medicare-for-all proposals, majorities of Americans are unaware of the kind of dramatic changes that the plans would bring to the nation’s health care system. For example: 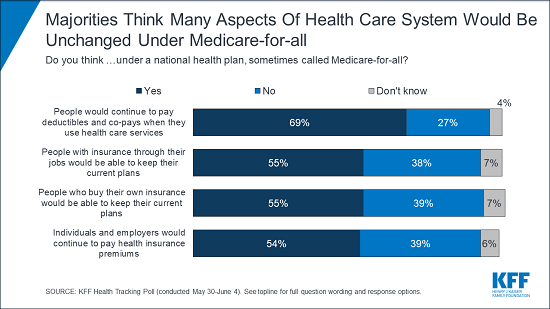 One aspect of the leading Medicare-for-all proposals is widely understood: Its impact on taxes. The survey finds eight in 10 Americans (78%) are aware that taxes would increase for most people under such a plan.

There is a partisan divide on some aspects of how a national health plan would affect people and health care providers.

Three-fourths of Democrats (76%) say that all U.S. residents would have health insurance coverage under a national health plan compared to 45% of Republicans. On the flip side, almost two-thirds of Republicans (64%) say a national health plan would lead to doctors and hospitals being paid less, while fewer Democrats (42%) say this would happen. Large shares of independents believe both of these things would happen, with six in 10 (61%) saying all U.S. residents would get health coverage and half saying doctors and hospitals would be paid less.

With the first Democratic presidential debates set for June 26 and 27, the poll also probes what Democrats and Democratic-leaning independents most want to hear the candidates discuss. Health care emerges as the top issue, with 87% saying it is “very important” for candidates to discuss in the debates.

Amid news coverage about abortion restrictions and the #MeToo movement, issues affecting women ranks second among Democrats and Democratic-leaning independents, with 80% saying this is “very important” for candidates to talk about. Other top issues for Democrats include climate change (73%), gun policy (72%), income inequality (70%), the economy (69%) and immigration (66%).

When asked specifically what aspect of health care that they want to hear about, nearly three in 10 Democrats and Democratic leaners (28%) mention concerns around lowering the amount people pay people for health care. Another 8% mention lowering the cost of prescription drugs. 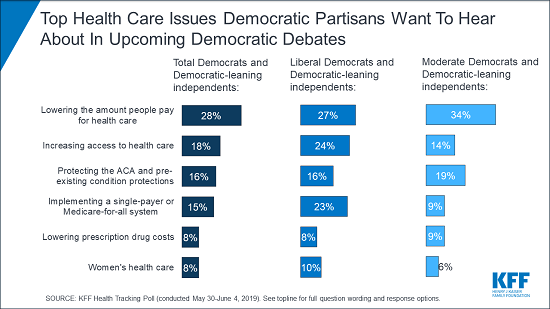 Designed and analyzed by public opinion researchers at KFF, the poll was conducted May 30-June 4, 2019 among a nationally representative random digit dial telephone sample of 1,206 adults. Interviews were conducted in English and Spanish by landline (298) and cell phone (908). The margin of sampling error is plus or minus 3 percentage points for the full sample. For results based on subgroups, the margin of sampling error may be higher.