Most Florida Voters Favor Expanding Medicaid in their State, As Do Voters across All Non-Expansion States

In an expansive look at the role issues and politics may play in the 2018 midterm elections, the latest KFF Health Tracking Poll continues to find health care as the top issue for voters, but large shares of voters also say candidate characteristics, President Trump, and party control over Congress will be major factors.

Midterm elections are often viewed as a referendum on the president, and two-thirds (66%) of voters say a candidates’ support for or opposition to President Trump will be a major factor in their voting decision. Other important factors include the candidates’ character and experience (73%) and which party controls Congress (66%).

When looking at the role of issues in the 2018 midterms, health care is voters’ top issue with seven in 10 (71%) saying health care is “very important” in deciding who they will vote for. Other top issues are the economy and jobs (64%), gun policy (60%), and immigration (55%). 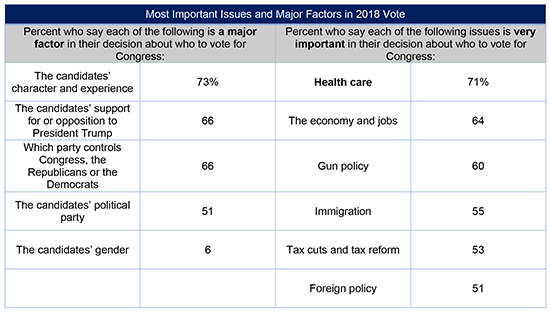 While at least half of voters say all of the issues are “very important” to their vote, when asked to choose the one issue that is the most important, health care is chosen by at least one-fourth of voters nationally, in key battlegrounds, and in Florida and Nevada, ranking among the top issues in each election. It is the top issue for Democratic voters, yet, in all of these elections, the issue ranks lower for Republican voters, who rank immigration and the economy and jobs at the top of their list. 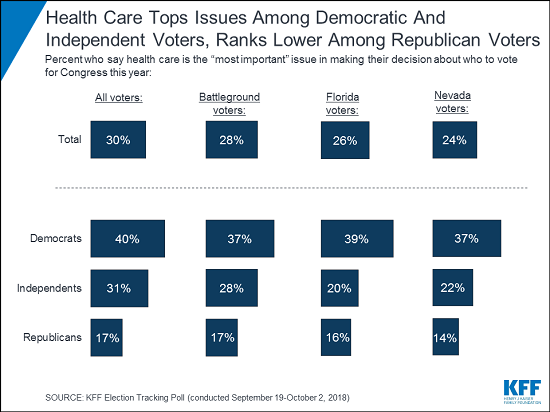 In states that have not expanded their Medicaid programs under the Affordable Care Act, including four with related ballot initiatives, few voters (15%) say they’ve heard a lot about the issue. 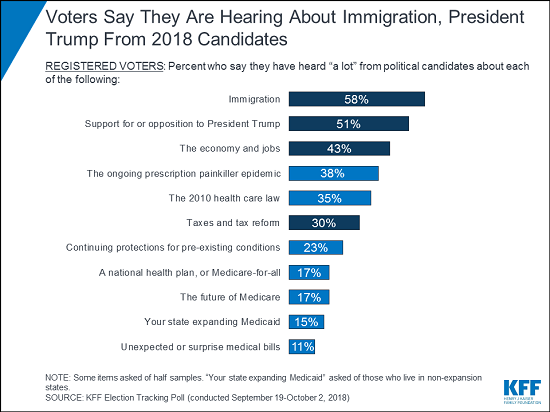 Florida and Nevada: A Look at Health Care Issues in Two Bellwether States

In addition to the national tracking poll, KFF also conducted separate surveys in Florida and Nevada, two bellwether states with competitive gubernatorial and Senate races, looking at how candidate positions on health care may impact voters. In both Florida and Nevada, one specific health care position stands above all others in terms of its importance to voters: protecting people with pre-existing conditions from insurance discrimination.

Nearly seven in 10 voters in both Florida (69%) and Nevada (68%) say that they would be more likely to vote for a candidate who wants to maintain the Affordable Care Act’s protections for people with pre-existing conditions even if it results in higher costs for healthy people, while small shares (9% in Florida, 8% in Nevada) say they’d favor a candidate who wants to eliminate those protections. This includes majorities of Democrats and independents in both states, as well as a majority of Nevada Republicans (60%) and nearly half of Florida Republicans (46%).

On the issue of pre-existing conditions in the gubernatorial race, more Florida voters say they have more trust in Democratic candidate Andrew Gillum (43%) than Republican candidate Ron DeSantis (29%). In Nevada’s gubernatorial election, voters are split evenly on who they trust more on this issue between Republican Adam Laxalt and Democrat Steve Sisolak (33% and 30%, respectively).

Designed and analyzed by public opinion researchers at the Kaiser Family Foundation, the poll was conducted from September 19-October 2 among a nationally representative random digit dial telephone sample of 1,201 adults as well as a representative sample of Florida residents (599) and Nevada residents (599). Interviews were conducted in English and Spanish by landline and cell phone. The margin of sampling error is plus or minus 3 percentage points for the full national sample, 5 percentage points for Florida sample, and 5 percentage points for Nevada sample. For results based on subgroups, the margin of sampling error may be higher.