People Who Switched Plans Due to Cancellation Notices or Other Reasons Are As Likely To Say Their Premiums Went Down As Went Up Overall About As Many People in This Market Feel They Benefited From the ACA As Feel Negatively Impacted, With Variations By Sub-Group

The first in a series of new surveys from the Kaiser Family Foundation of people who buy their own health insurance provides new data about the experiences and perceptions of a group that has been the subject of much conjecture and political debate. The survey finds nearly six in 10 people (57%) who purchased health insurance through the Affordable Care Act’s new marketplaces (also known as “exchanges”) had been uninsured just prior to obtaining coverage. Most of this group say they had been without coverage for at least two years, and seven in ten (72%) say they decided to buy their own health insurance because of the ACA. The law provides income-based premium subsidies to people who buy coverage through the marketplaces. 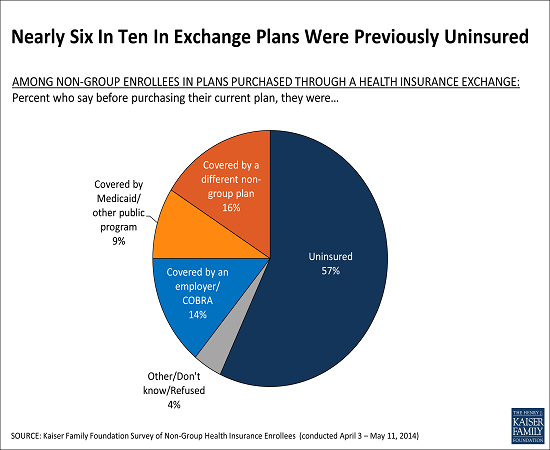 The survey reports the views and experiences of people with non-group coverage, including those in ACA-compliant plans sold both inside and outside the state marketplaces, as well as those in non-compliant plans, which are policies that took effect prior to Jan. 1 and in many cases would not comply with all the law’s requirements.

People with non-group insurance coverage overall are more likely to have a favorable view of the ACA than the public at large. Non-group enrollees are roughly evenly split between favorable (47%) and unfavorable (43%) views, while among adults nationwide in the same age range, more have an unfavorable view of the law (46%) than a favorable one (38%). When asked about the overall impact on their own families, similar shares of non-group enrollees say that they’ve benefited (34%) and been negatively affected (29%) by the law. Among those who say they benefited, the most commonly cited ways are through lower costs and expanded access to care and insurance. Those who feel negatively affected are most likely to cite increased costs, with much smaller shares citing other concerns such as the law’s individual mandate, cuts to benefits or choices, and policy cancellations. There is significant variation in these perceptions by individual characteristics, with those who report getting financial assistance in the marketplaces most likely to feel they benefited, and those who say they’ve had a plan cancelled most likely to say they were affected negatively. 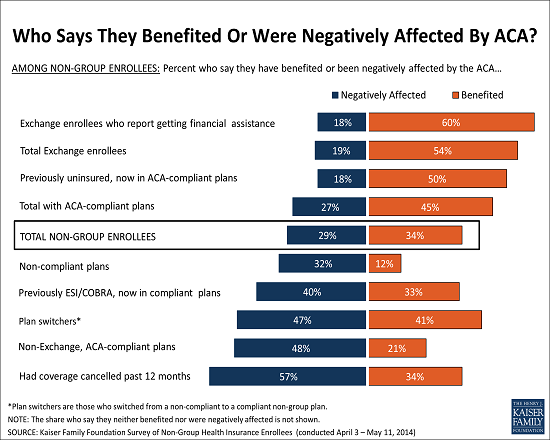 Demographics of Those Enrolled in Non-Group Coverage

The survey reveals some differences in the self-reported health status of people in compliant plans and non-compliant plans that may have implications for future insurance rates.  Enrollment in compliant plans, whether sold inside or outside the state marketplaces, is especially important as insurers will set rates for next year based on this group’s experiences in each state.

While a large majority (82%) of those in compliant plans says they are in excellent, very good or good health, an even larger majority of those who remain in non-compliant plans say the same about their health (93%). This means that people in compliant plans are somewhat more likely than those in non-compliant plans to report being in fair or poor health (17% vs. 6%), which was expected as the law required insurers to accept all enrollees, regardless of their health. The effect of this on premiums is still uncertain, however, since many insurers anticipated a sicker-than-average mix of enrollees when they set their premiums for this year.

Most people (71%) in compliant plans overall rate their coverage as excellent or good overall, and more than half (55%) say it is an excellent or good value for what they pay for it, though roughly four in ten (39%) rate the value as “only fair” or “poor,” and about the same share say it is difficult to afford their monthly premiums (43%).

“This is a market very much in flux, and we will track experiences and perceptions over time as new people enroll and those already in the market gain more experience using their new plans,” said Liz Hamel, director of the Foundation’s Public Opinion and Survey Research. “While the share of the overall population enrolled in the non-group market is small, their views and experiences will have outsized significance in terms of whether the ACA is viewed as a success or not.”

Profile of Plan Switchers: How Their New Coverage Compares to Their Old Insurance

The survey also provides new insights into the experiences of “plan switchers,” people who previously had individual-market coverage and switched to new coverage after Jan. 1 either by buying coverage through the state marketplaces or directly from insurers. This group includes people who had their old policies cancelled as the ACA’s requirements kicked in, as well as people who switched for other reasons, including the availability of premium subsidies. In spite of reports last year about some people having plans cancelled and facing higher premiums, the survey finds that plan switchers are about as likely to report that they are paying less for their new plan than their old one (46%) as they are to say they are paying more (39%). This is likely due in part to the availability of tax credits for low- and moderate-income families who buy marketplace coverage.

“While there was much controversy last fall over ârate shock’ for people who had their policies cancelled, it’s now apparent that just as many people got financial relief under the Affordable Care Act,” Kaiser Senior Vice President Larry Levitt said.

Survey responses for plan switchers also indicate that their deductibles and level of coverage are similar to what they had in their previous plans. They are as likely to say their new plan’s deductible is lower than their old one as they are to say it is higher (31% in each case).  Similarly, about the same shares say their new plan covers more (31%) as less (25%) services, and that their new plan offers more (29%) rather than less (26%) financial protections.

While more than half of plan switchers say their choice of providers is “about the same” under their new plan as under their old plan, more say they have less choice than more choice when it comes to primary care doctors (32% vs. 10%) and specialists (24% vs. 11%).

Compared to those in compliant plans who were previously uninsured, plan switchers report lower levels of satisfaction with the costs of their plan, and are less likely to believe their coverage is a good value for what they pay for it.

The survey also includes people’s assessments of their experiences shopping for a plan, including the ease of comparing plan features and enrolling in a plan, whether online or in person. Overall, half of those in ACA-compliant plans say they got outside help with the enrollment process, while the other half say they completed the process on their own.

Full survey results, including the detailed methodology and question wording, are available online.

The survey was designed and analyzed by researchers at the Foundation. Telephone interviews were conducted from April 3 through May 11, 2014 among a nationally representative random sample of 742 adults ages 18-64 who purchase their own insurance, including 333 via landline and 409 via cell phone. Fieldwork was carried out in English and Spanish by SSRS, an independent research company. The margin of sampling error is plus or minus 4 percentage points for results based on the full sample, 5 percentage points for those in ACA-compliant plans, and 6 percentage points for those in plans purchased through the marketplace. For other subgroups, the margin of sampling error may be higher.