Affordability Remains Significant Concern for Many in Non-Group Plans

Following the Affordable Care Act’s second open enrollment period, most people enrolled in marketplace plans report being satisfied with a wide range of their plan’s coverage and features, finds a new Kaiser Family Foundation survey of people who buy their own health insurance.

A large majority (74%) of those in marketplace plans rate their coverage as excellent or good, the survey finds. Most (59%) also say their plan is an excellent or good value for what they pay for it, though the share rating the value as “excellent” declined somewhat from 23 percent last year to 15 percent in the current survey.

Majorities also say they are “very” or “somewhat” satisfied with seven different features of their plans, including their choice of primary-care doctors (75%), hospitals (75%) and specialists (64%); what they have to pay out of pocket for doctor visits (73%), prescription drugs (70%) and annual deductible (60%); and their monthly premiums (65%). 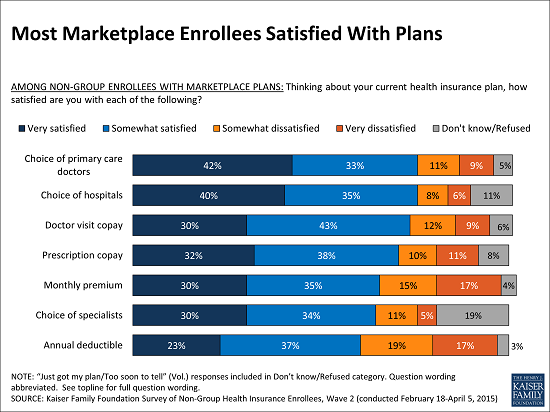 Compared to those with older, non-ACA compliant non-group plans, enrollees in marketplace plans are less likely to say they are satisfied with their plan’s choice of primary care doctors and hospitals, but somewhat more likely to express satisfaction with their monthly premiums and annual deductibles.  This is likely because many are receiving premium tax credits and cost-sharing subsidies that are not available in non-compliant plans.

The survey is the second in a series exploring the experiences and perceptions of people who purchase their own health insurance, the group perhaps most affected by the ACA’s reforms to the individual insurance market and tax subsidies to make such coverage more affordable. It includes people in ACA-compliant plans sold both inside and outside the federal and state marketplaces, as well as those still in non-compliant plans, which took effect prior to January 2014 and in many cases do not comply with all the law’s requirements.

Making non-group insurance affordable was a key goal of the ACA’s changes to the individual market and its tax subsidies.  In spite of high overall satisfaction levels, a significant minority of enrollees report challenges and worries related to the affordability of coverage and care.

The survey finds most (57%) of those in ACA-compliant plans feel financially well-protected by their insurance, though nearly four in ten (38%) feel vulnerable to high medical bills.  A similar share (34%) of those with non-compliant plans reports feeling vulnerable to high medical bills, as do 28 percent of people with employer coverage interviewed as part of a separate survey.

Also, nearly half (46%) of both those with ACA-compliant and non-compliant plans say that it is “very” or “somewhat” difficult for them to afford to pay their monthly health insurance premium.

The survey also finds that among all non-group enrollees (including those in ACA-compliant and non-compliant plans), four in ten have plans with high deductibles ($1,500 or more for an individual or $3,000 or more for a family). Compared to those with lower deductibles, enrollees in high-deductible plans give their insurance lower ratings and are more likely to feel vulnerable to high medical bills.

When asked hypothetically about an unexpected medical bill for which the portion not covered by insurance is $1,500, about three in ten (31%) of those with high-deductible plans say that they could pay it off without going into debt, while 43 percent say they would have to go into credit card debt or borrow money to pay it, and 15 percent say they would not be able to pay such a bill at all.

The survey also examined enrollees’ experiences signing up for coverage.  It finds more than a third (36%) of those with ACA-compliant plans did not have non-group coverage in 2014, most of whom (26% overall) were uninsured immediately prior to obtaining their current coverage.  Among those who were already in the non-group market last year, most chose to renew their existing plan rather than make a switch, while a small share (15% of all those in ACA-compliant plans) switched from a different non-group plan.

A large majority of those who renewed an ACA-compliant plan this year say it was very or somewhat easy to renew, including 77 percent of those with marketplace coverage.  Seven in ten (69%) say they did not shop around before renewing, with the most common reason being that they were satisfied with their current plan.  Among those who did purchase new plans this year, most say it was easy to compare premiums and cost-sharing and to figure out if their income qualifies them for government financial assistance.

In weighing plan options, cost concerns play a major role.  Nearly four in ten (38%) of those enrolled in ACA-compliant plans cite the monthly premium as an extremely important factor in their plan choice, while nearly as many cite the deductibles and copays (32%).  Fewer say that the plan’s choice of doctors and hospitals (25%) or the range of benefits offered (23%) were extremely important. 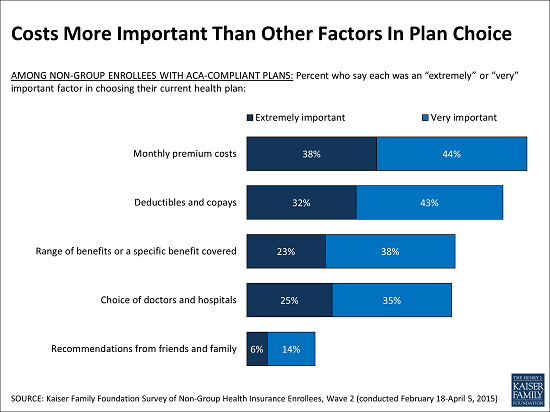 METHODOLOGY
The survey was designed and analyzed by researchers at the Foundation. Telephone interviews were conducted from February 18 through April 5, 2015 among a nationally representative random sample of 804 adults ages 18-64 who purchase their own insurance, including 346 via landline and 458 via cell phone. Fieldwork was carried out in English and Spanish by SSRS, an independent research company. The margin of sampling error is plus or minus 4 percentage points for results based on the full sample, 5 percentage points for those in ACA-compliant plans, and 6 percentage points for those in Marketplace plans. For other subgroups, the margin of sampling error may be higher.