As the White House and Congress continue to debate new funding and other actions to address the nation’s opioid epidemic, the latest Kaiser Health Tracking Poll finds that most Americans believe the federal government is not doing enough to combat the recent increases in the number of people who are addicted to prescription painkillers (66%) or heroin (62%).

State governments fare no better in the public’s view, with similarly large shares saying they aren’t doing enough to combat the twin problems of painkiller abuse (67%) and heroin abuse (61%).  Majorities say the same about doctors who prescribe prescription painkillers (63% and 56%, respectively), and individuals who use prescription painkillers or heroin (73% and 77%, respectively). Far fewer say police officers are not doing enough to combat painkiller abuse (37%) and heroin abuse (36%). 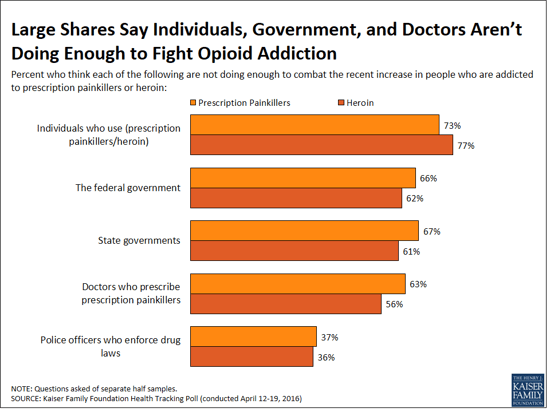 Prescription drug addiction also impacts much of the public on a personal level, with 44 percent saying they personally know someone who has been addicted to prescription painkillers, including 20 percent who say the person was a family member and 2 percent who say they themselves were addicted.

Smaller shares say three other strategies would be at least somewhat effective: encouraging people who are prescribed painkillers to dispose of any extras once they are no longer needed (63%); reducing the social stigma around addiction (60%), and putting warning labels on prescription bottles that explain the risk of addiction (49%).

The poll also assesses the public’s views on expanding access to a drug (called Narcan or Naloxone) that can prevent people from dying if they experience an overdose of painkillers or heroin. Most Americans (59%) say the drug should only be available with a doctor’s prescription, while just more than a third (36%) say it should available without one.

One in five Americans (21%) say that they or someone in their immediate family once needed mental health services but did not get them. Those who did not get treatment cite several factors, including that they couldn’t afford the cost (13% of the public overall); insurance wouldn’t cover it (12%); they were afraid or embarrassed to seek care (10%); and they didn’t know where to go to get care (8%).

Most people also are not aware of federal requirements that insurance plans apply the same set of rules for mental health benefits and substance abuse treatment as for other medical services in terms of copays, deductibles and coverage limits.  About four in 10 (43%) know that health plans must have the same rules for mental health benefits; three in 10 (30%) know this for substance abuse treatment.