Ahead of the June 21 federal deadline for insurers to submit rates for healthcare.gov, the Kaiser Family Foundation has released a new map that will track counties at risk of zero insurers offering plans in the 2018 marketplace.

As of now, 44 counties (or 1.4 percent of 3,143 counties) are at risk of having no insurers participating in the insurance marketplaces, representing 31,268 estimated enrollees or 0.3 percent out of 12.2 million. 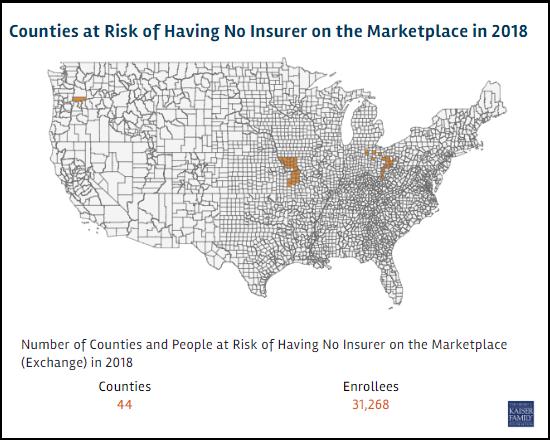 Foundation experts will continue updating the map until insurer participation in 2018 is finalized in the fall of 2017.

In a county where no insurer offers a plan through the marketplace, consumers may be able to buy a plan outside the marketplace. However, they would not be able to use federal subsidies, such as advance premium tax credits or cost-sharing reductions, to defray insurance premium or out-of-pocket costs.