In the wake of the lead crisis affecting drinking water in Flint, Mich., the public now ranks contaminated drinking water among the most serious national health issues, trailing cancer, according to the April Kaiser Health Tracking Poll.

When asked about a series of health issues facing the country, more than a third (35%) identify contaminated drinking water as “extremely serious,” behind cancer (43%) and similar to heroin abuse (35%)  and ahead of major diseases such as heart disease ( 27%) and diabetes (31%). 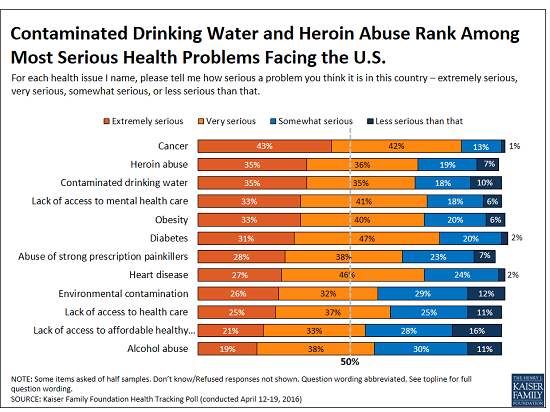 The majority of Americans are not very confident that their state government can ensure the safety of the water supply and other basic services over the next five years. This includes seven in ten (70%) who say they are not very confident in their state government’s ability to ensure the safety of the water; two thirds (67%) say the same about the public sewer system; and six in ten (59%) say so about the electrical system.

Overall, women are less confident in the government’s ability to ensure the safety of public services than men are. Three-fourths of women (74%) are not very confident in their state’s ability to ensure the safety of their water, compared to two thirds (66%) of men. Similar gender differences exist on the questions about sewage and electrical services.

Fielded amid news reports about government officials facing charges related to Flint’s contaminated water supply, the poll finds larger shares of the public rating their state government’s efforts to protect the water supply as either “excellent”  (17%) or “good” (37%) than “fair” (31%) or “poor” (14%).  The public rates the federal government less favorably, with more saying it’s doing a “fair” (36%) or “poor” (26%) job than saying it’s doing an “excellent” (7%) or “good” (29%) job.