Most Common Reason for Remaining Uninsured is Not Being Able to Find an Affordable Plan; Just 7 Percent Would Rather Pay a Fine than Pay for Coverage

As the Supreme Court Considers Challenge, a Majority Supports the Law’s Requirements for Contraceptive Coverage, Including for Employers with Religious Objections

Despite the news that 8 million people have signed up for health insurance through the ACAâs new marketplace, the April Kaiser Health Tracking Poll finds no change over the past month in the public’s view of the law, with 46 percent of the public saying they have an unfavorable view and 38 percent a favorable view.

At the same time, nearly six in ten (58%) say they want their representative in Congress to work to improve the law, compared to just over a third (35%) who want them to work on repealing it and replacing it with something else.  While there are clear partisan divisions on this question, about three in ten Republicans agree with the majority, preferring that Congress work to improve the law.

In spite of the late surge that pushed marketplace enrollment above the Congressional Budget Office’s initial projections, nearly six in ten people (57%)  say that the number of people signing up for coverage fell short of the governmentâs expectations.  The same share (57%) also says âthere have been so many problems since the lawâs rollout that itâs clear the law is not working as planned.â  As expected, Republicans are far more likely to say the law is still not working than Democrats, with independents in the middle.  Among Democrats, though, about a third believes the law is still not working. 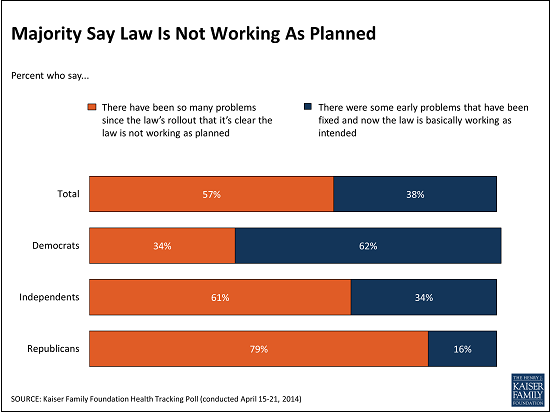 With the Supreme Court weighing challenges to the ACAâs requirement that private health plans cover prescription birth control without cost-sharing, the latest Kaiser Health Tracking Poll finds that, in general, the public supports the requirement by a nearly 2-to-1 margin (61% support, 32% oppose). Women, younger adults, Democrats and independents are the groups most likely to support the requirement, while seniors are split and a majority of Republicans are opposed.

Asked more specifically about for-profit companies whose owners have religious objections to birth control, a majority (55%) feels these companies should still be required to cover birth control.  This includes nearly three quarters of Democrats, a majority of independents and a third of Republicans.

This monthâs Kaiser Health Policy News Index finds that just over half the public (53%) says they closely followed news coverage of the ACA enrollment numbers, and more than four in ten (44%) report closely following the Supreme Court contraceptive coverage case.

The survey was designed and analyzed by public opinion researchers at the Kaiser Family Foundation and was conducted from April 15-21 among a nationally representative random digit dial telephone sample of 1,504 adults ages 18 and older. Telephone interviews conducted by landline (750) and cell phone (754) were carried out in English and Spanish. The margin of sampling error for the full sample is plus or minus 3 percentage points. For results based on subgroups, the margin of sampling error may be higher.