An improving economy and the Affordable Care Act’s individual mandate may be behind a modest increase in the share of Americans with job-based health insurance in recent years, but the long-term trend remains a downward one, according to a new KFF analysis.

Data from the federal National Health Interview Survey show the share of the nonelderly population covered by workplace plans rose from 56.3 percent in 2013 to 58.4 percent in 2017. That was still nearly nine percentage points lower than the 67.3 percent covered by employer-sponsored plans in 1999. The share has declined markedly over the last two decades, with the greatest percentage reductions among people with incomes under 400 percent of poverty ($85,320 for a family of three in 2019).

(It is still the single largest form of coverage, KFF President and CEO Drew Altman writes in an Axios column.) 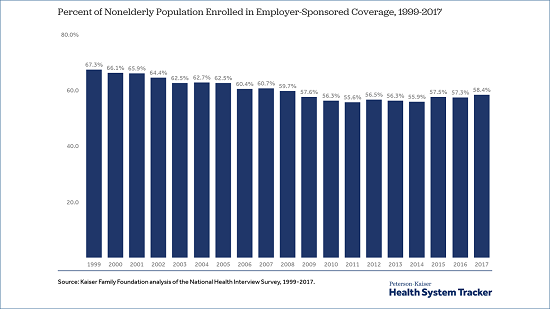 While job-based insurance remains the nation’s single largest source of coverage, the 156.3 million people covered in workplace plans in 2017 was roughly equivalent to the 159.4 million covered in 1999 – this despite an increase in the nonelderly population of 31.5 million people since then. Had coverage rates stayed at the 1999 level, almost 24 million more people would have been in employer plans in 2017.

Several factors may help explain the recent upward trend, which has resulted in about seven million more people with employer-based health coverage since 2013. The economy improved steadily from the deep recession of 2008 and 2009, with both incomes and employment increasing, resulting in more people being eligible for and able to afford employer-sponsored coverage. Additionally, the ACA’s requirement that people obtain health insurance or pay a tax penalty, known as the “individual mandate,” may have pushed more Americans to enroll in employer coverage that they would have otherwise declined, and the law’s employer mandate may have helped boost the availability of coverage for lower-wage workers. (Congress has set the tax penalty for the individual mandate to $0 beginning this year.)

Pushing in the other direction, the availability of subsidies in the ACA marketplaces may have led some smaller employers not subject to the law’s employer mandate to stop offering coverage. More recently, though, rising premiums have helped drive a decline in individual market enrollment, especially among those not receiving ACA tax credits.

The new analysis is available on the Peterson-Kaiser Health System Tracker, a partnership between the Peterson Center on Healthcare and KFF that monitors the U.S. health system’s performance on key quality and cost measures.