Since 2014, the ACA has required non-group plans to cover 10 categories of essential health benefits comparable to those offered in employer group plans. The new analysis offers a window into how insurers could respond if the essential health benefits requirement is rolled back, a change being considered by Congressional leaders and allowed through state waivers by the House-passed American Health Care Act as a potential way for lowering premiums.

Without the requirement, however, insurers in the non-group market would likely be reluctant to offer coverage for some expensive services that have an element of predictability and persistence, as people who needed these benefits would disproportionately select policies covering them. Unlike in the pre-ACA market, insurers would not be able to exclude from coverage altogether people with pre-existing conditions. 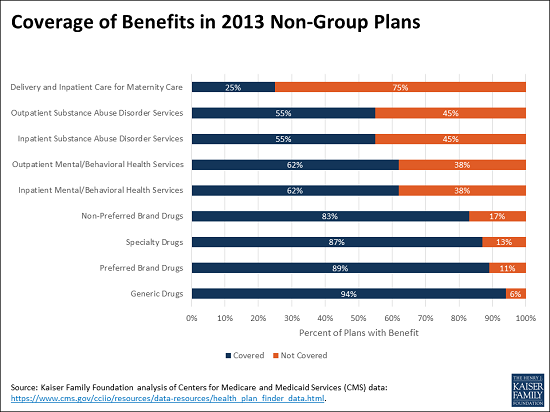 The analysis uses data insurers provided for the Health Plan Finder on HealthCare.gov for the last quarter of 2013.  Certain provisions of the ACA, such as the prohibition of annual and lifetime dollar limits on benefits, had already begun to be phased in by that point, so the data does not reflect all of the types of limitations in non-group policies prior to the ACA.