After the Election, the Public Remains Sharply Divided on Future of the Affordable Care Act

Among Those Who Favor Repeal, Arguments About Loss of Coverage for Those with Pre-Existing Conditions Can Sway Some Opinions

Many Obamacare Provisions Remain Broadly Popular Across Party Lines, But Not its Mandate

The first Kaiser Health Tracking Poll since the 2016 election finds that Americans are largely divided on the future of the Affordable Care Act even though many of the law’s major provisions remain quite popular across party lines.

The new survey finds that one fourth (26%) of Americans want to see President-elect Donald Trump and the next Congress repeal the entire law, and an additional 17 percent want them to scale back what the law does. This compares to 30 percent of the public who want to see the law expanded and 19 percent who want to see lawmakers move forward with implementing the law as it is. 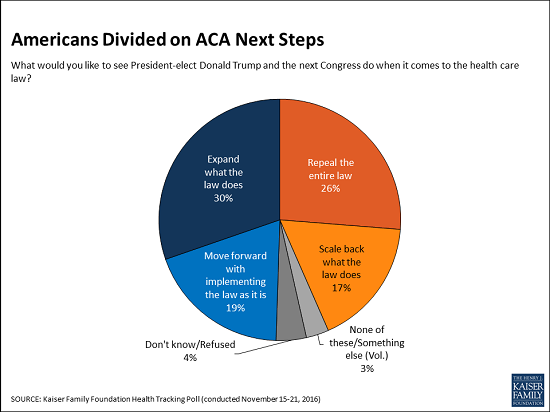 The poll captures a slight uptick in the share of Americans who want lawmakers to scale back the law as well as a decrease in the share who want lawmakers to repeal the entire law.  This is largely driven by Republicans: About half (52%) of Republicans now say they want to see the Affordable Care Act repealed, down from 69 percent in October. At the same time, a quarter (24%) of Republicans now want to see the law scaled back, up from 11 percent in October.

Among those who want the law repealed, 38 percent (or 10% of the public overall) change their opinion after hearing the argument that repealing the ACA would mean that insurance companies could deny coverage to people with pre-existing conditions. A slightly smaller share change their opinion after hearing that more than 20 million Americans could lose their coverage.

Public supports many specific Obamacare provisions, but not the individual mandate

While President-elect Donald Trump and Republican leaders in Congress work on a replacement to the Affordable Care Act, the new poll finds many of the law’s specific provisions remain popular even among President-elect Trump’s supporters, potentially complicating the path ahead.

For example, majorities of Republicans, Democrats and independents alike say they favor:

In contrast, a third (35%) of the public says they favor the law’s provision requiring that nearly all Americans have health coverage or pay a fine (63% have an unfavorable view).  A majority of Democrats (57%) favor this provision but far fewer independents (30%) and Republicans (21%) do. 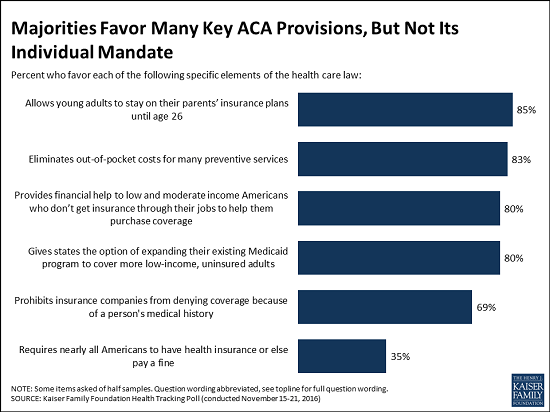 Support for the law’s requirement that employers with at least 50 workers offer health insurance or pay a fine is more mixed, with a majority of the public (60%) supporting it, including majorities of Democrats and independents. In contrast, just 45 percent of Republicans favor this provision.

Overall attitudes towards the Affordable Care Act are largely unchanged following the election: 45 percent of the public has an unfavorable view and 43 percent has a favorable view. In addition, the poll finds health care played a limited role in voters’ 2016 election decisions, with 8 percent of voters saying health care was the biggest factor in their vote.

Americans are divided on how repeal would affect health care costs for them and their family, with nearly equal shares saying repealing the law would make costs worse (30%) as saying it would make costs better (27%). Another four in 10 say their health care costs would be about the same. Most also say that, under repeal, they would expect their quality of care and access to health insurance to remain about the same.

Importantly, Trump voters are much more likely to say repeal would help them personally. Half (52%) of those who supported Trump say the cost of health care for them and their family will get better under repeal, and many say the quality of their health care (39%) and their ability to get and keep health insurance (35%) would get better.

Designed and analyzed by public opinion researchers at the Kaiser Family Foundation, the poll was conducted from November 15-21 among a nationally representative random digit dial telephone sample of 1,202 adults. Interviews were conducted in English and Spanish by landline (422) and cell phone (780). The margin of sampling error is plus or minus 3 percentage points for the full sample. For results based on subgroups, the margin of sampling error may be higher.