The Current News and Political Environment

The June Kaiser Health Tracking Poll examines the role of the major health policy news stories in the current news and political environment. In addition, it provides an in-depth analysis of two of the biggest health policy stories: the Zika virus outbreak and the rising costs of ACA health insurance premiums. 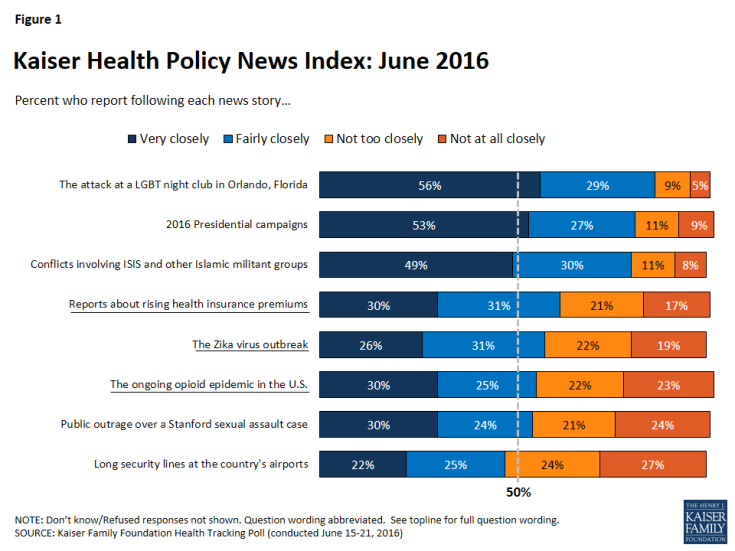 Over the past month, one of the major health policy stories involves reports that health insurance premiums under the Affordable Care Act (ACA) may be increasing in 2017. This month’s tracking survey examines overall perceptions of the 2010 health care law and the impact that the rising costs may have on health care consumers.

The ACA and Health Care Costs 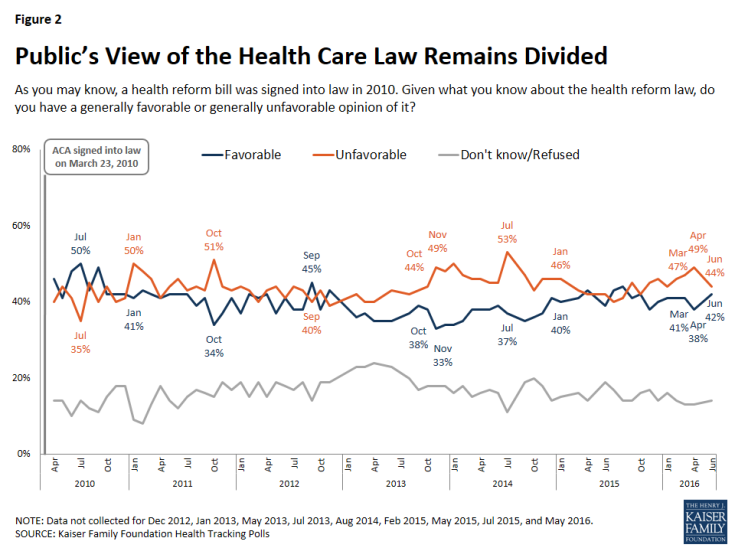 Next Steps for the ACA 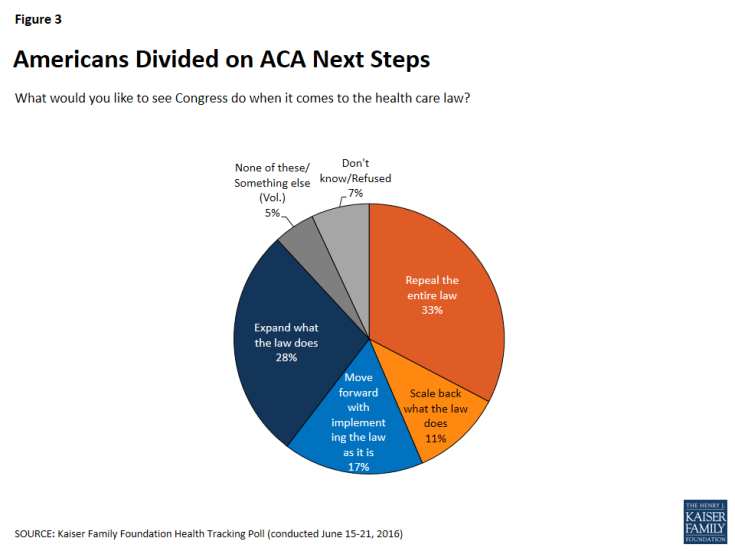 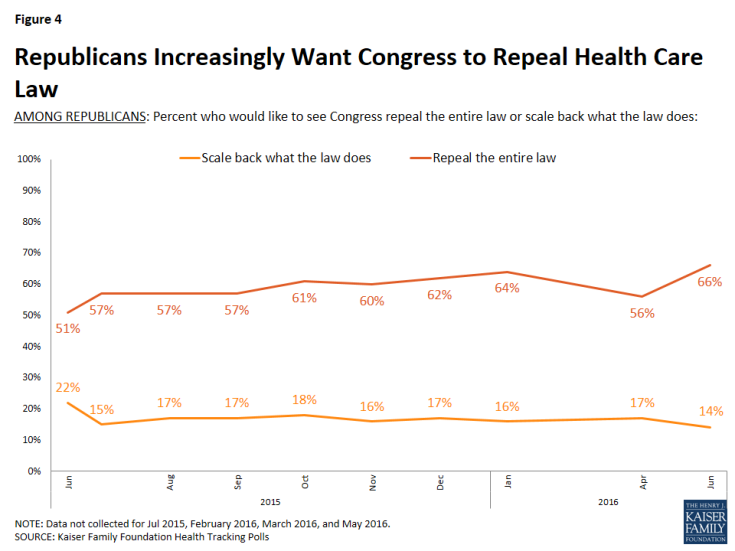 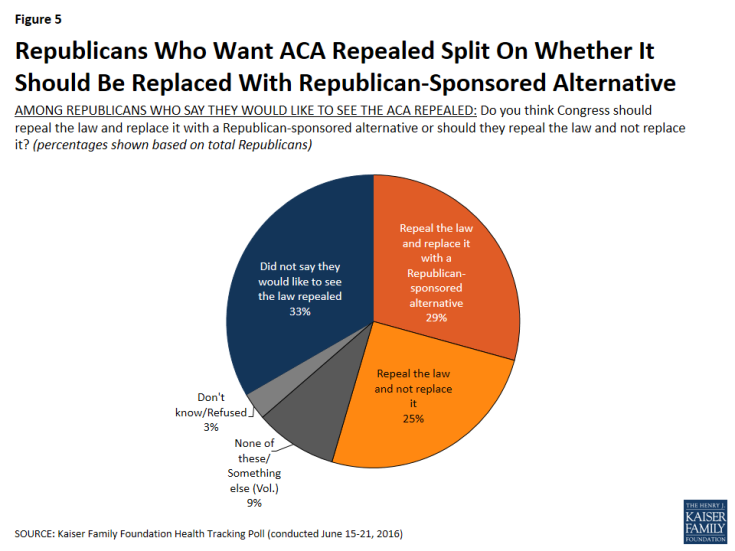 Figure 5: Republicans Who Want ACA Repealed Split On Whether It Should Be Replaced With Republican-Sponsored Alternative 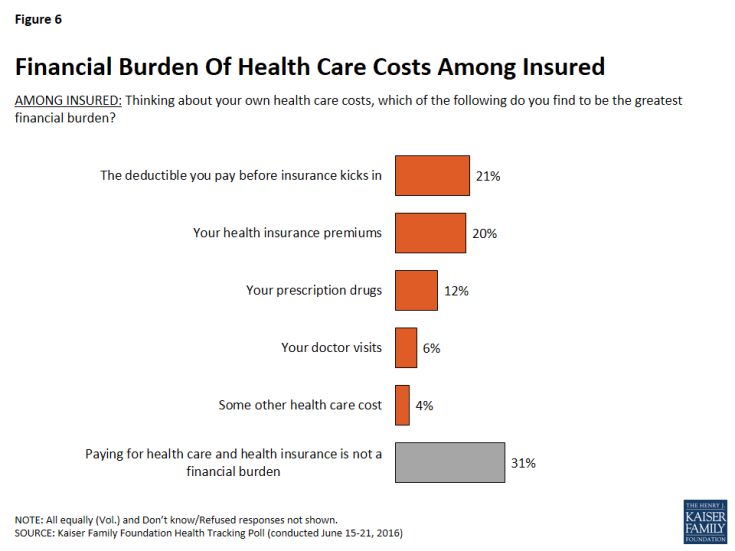 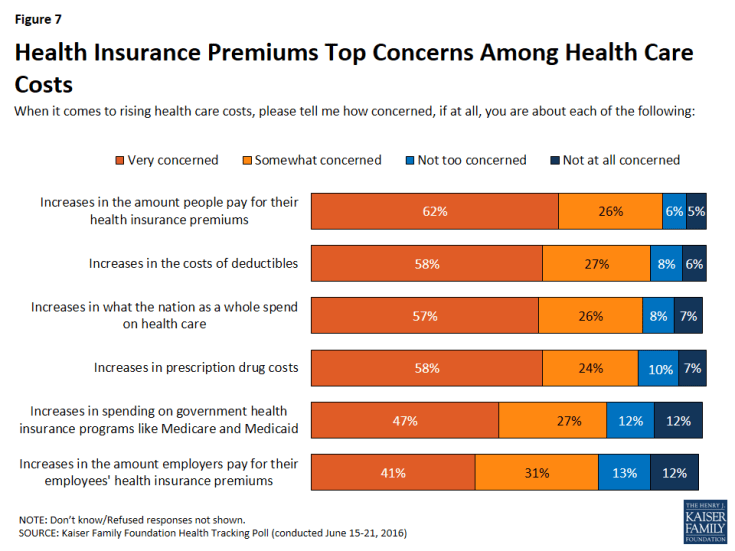 Despite the fact that 83 percent of the public say they have heard or read recent news about rising costs of health insurance premiums, individuals are uncertain about who and which plans are affected. Half of individuals (52 percent) say the reports have been about all insurance plans, 16 percent say the reports have been about just employer-sponsored plans, and one in ten say the news has only been about ACA Marketplace plans. 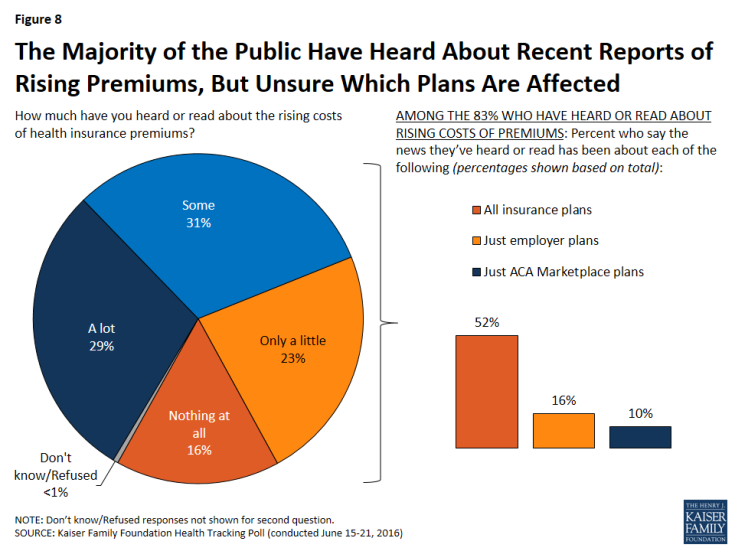 Figure 8: The Majority of the Public Have Heard About Recent Reports of Rising Premiums, But Unsure Which Plans Are Affected

Due to ongoing developments about the potential threats of the Zika virus, concerns over the 2016 Summer Olympics, and congressional debate over funding allocation to limit the effects of the virus in the United States, the Zika virus outbreak was one of the most reported health policy stories during the month of June. The Zika virus outbreak has remained on the public’s radar since earlier this year,2 with more than half of Americans consistently reporting that they are closely following news about Zika and a large majority regularly saying they have heard or read about it. 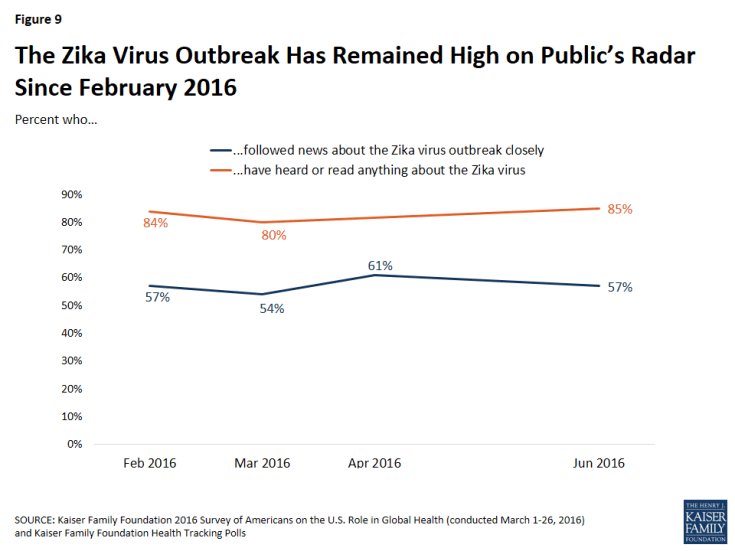 Figure 9: The Zika Virus Outbreak Has Remained High on Public’s Radar Since February 2016 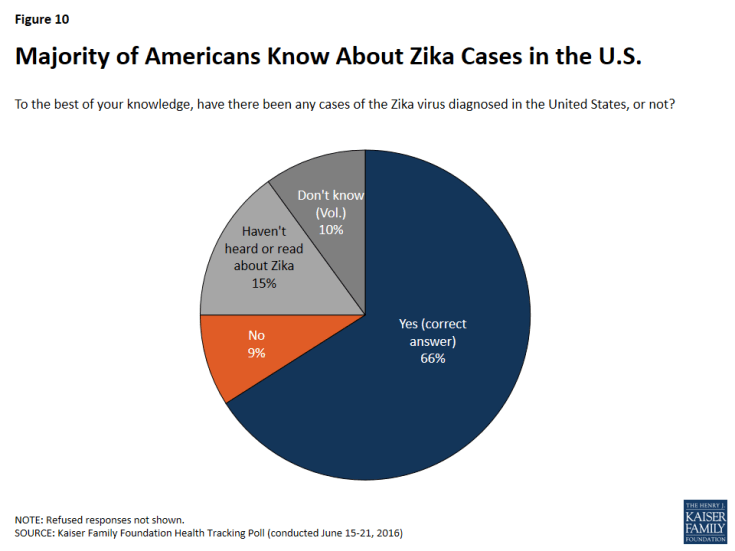 Figure 10: Majority of Americans Know About Zika Cases in the U.S.

Overall Knowledge on Transmission of the Virus and Potential Impacts 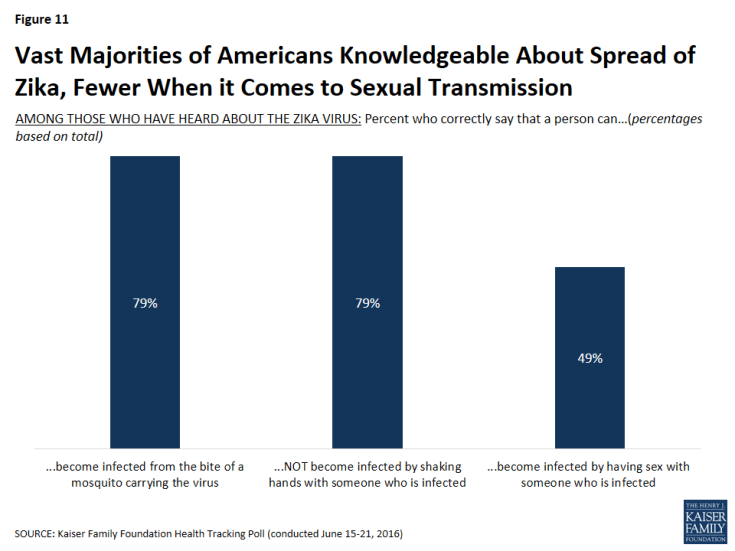 Figure 11: Vast Majorities of Americans Knowledgeable About Spread of Zika, Fewer When it Comes to Sexual Transmission 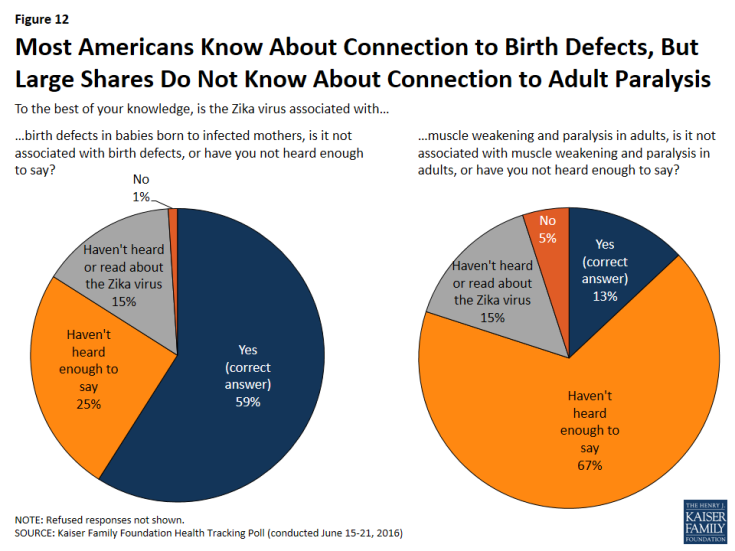 Most Americans aren’t too concerned in general about Zika in the U.S., although there are some concerns about the threat the virus poses to pregnant women. Overall, the majority of Americans (63 percent) think Zika will be contained to a small number of cases in the U.S. rather than a widespread outbreak (16 percent), and of those who have heard or read anything about the virus, only 13 percent say they think the Zika virus poses a major threat to them personally, while almost equal shares say it poses a minor threat (45 percent) or not a threat at all (41 percent). 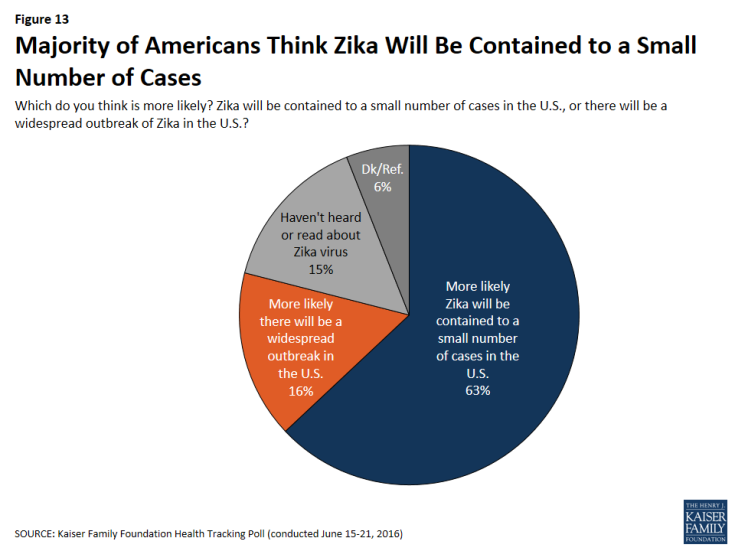 Figure 13: Majority of Americans Think Zika Will Be Contained to a Small Number of Cases

Despite this, three-fourths of Americans who have heard or read anything about the virus say the Zika virus poses a major threat to pregnant women (74 percent), with an additional 20 percent who say it poses a minor threat and only 3 percent who believe it does not pose a threat. 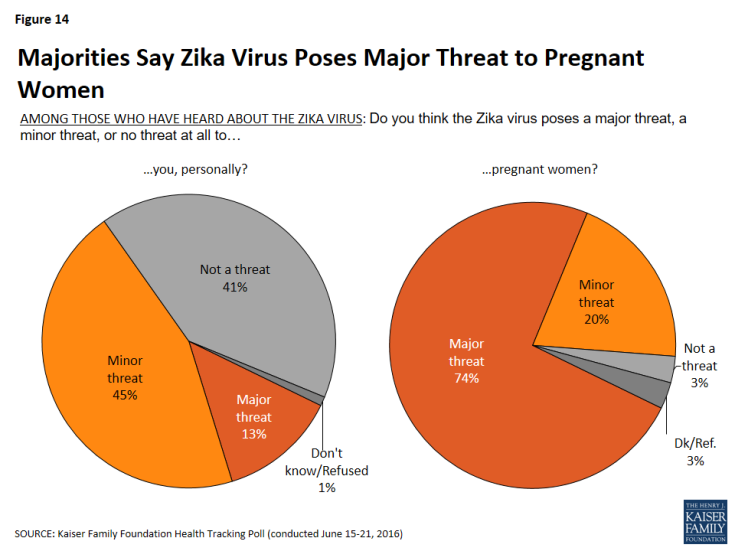 Hispanics More Likely to Perceive the Zika Virus as a Threat

The perceived personal threat posed by the virus differs dramatically by ethnicity, with almost one-third of Hispanic individuals who have heard or read anything about the virus saying the Zika virus poses a major threat to them personally, compared to about one in five Blacks (21 percent) and only 7 percent of whites. Hispanics are also more likely to report being worried about the potential effects of the Zika virus. More than half of Hispanics who have heard or read anything about the virus say they are worried that they or someone in their family will be affected by the virus, 43 percent are worried the U.S. will see a large number of Zika-related cases, and one-third are worried that the upcoming Summer Olympics will lead to an increase in Zika-related cases. Across all of these measures, a larger share of Hispanics report being “very worried” than Blacks (36 percent, 27 percent, and 24 percent, respectively) and whites (10 percent, 16 percent, and 19 percent, respectively). 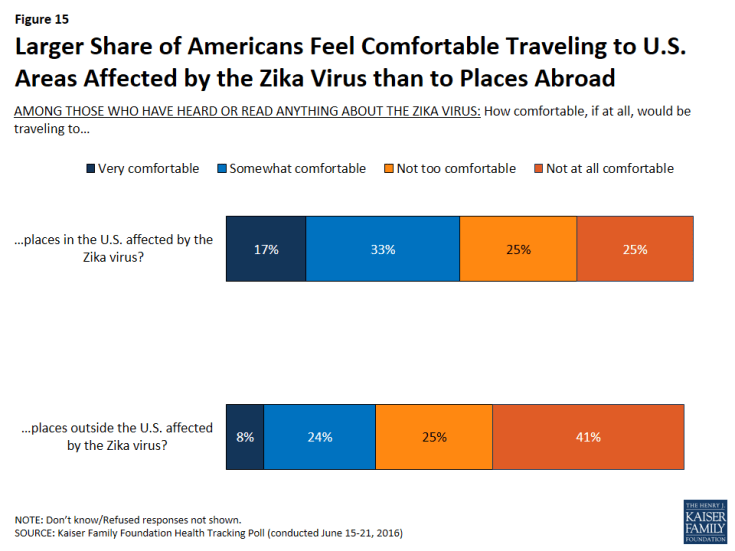 Figure 15: Larger Share of Americans Feel Comfortable Traveling to U.S. Areas Affected by the Zika Virus than to Places Abroad

The Impact of the Zika Virus on Travel Plans

Widespread Support for Funding Aimed at Limiting the Effects of Zika 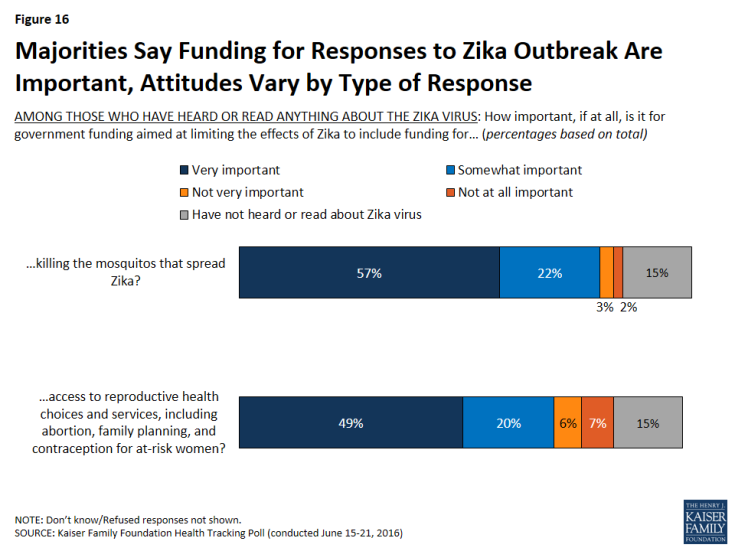 There are partisan differences in support for Zika-related funding, with Democrats and independents reporting higher levels of support than Republicans. Majorities of Democrats and independents say the U.S. should invest more money in research on the Zika virus, invest more money to prevent the spread of Zika, and help women in areas in the U.S. with Zika virus outbreaks access reproductive health services. It is worth noting that two-thirds of Republicans support investing more money in research on the virus and investing more money on preventing the spread of Zika in the U.S., but slightly less than half support helping women in areas in the U.S. with outbreaks of the virus access reproductive health services.