The Kaiser Health Policy News Index is designed to help journalists and policymakers understand which health policy-related news stories Americans are paying attention to, and what the public understands about health policy issues covered in the news. This month’s Index finds that news about the Affordable Care Act (ACA) enrollment numbers was followed by more than half the public, ranking behind two non-health news stories (the kidnapping of Nigerian schoolgirls and the ongoing conflict between Ukraine and Russia). While much of the big news around enrollment came out in April, attention to these stories has continued to inch up over the last several months, with the share closely following enrollment news up 5 percentage points since April, and up 10 points since March. 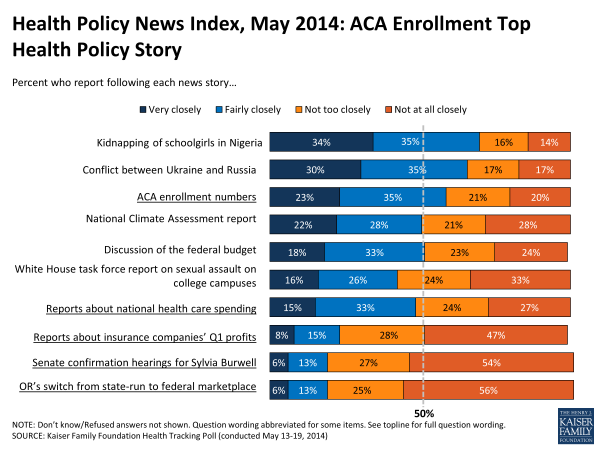 News about the kidnapping of a large group of school girls in Nigeria and the ongoing conflict between Ukraine and Russia caught the public’s attention this month, with large shares (69 percent and 65 percent respectively) saying they followed the stories “very” or “fairly” closely. Not far behind these headline-grabbing stories, nearly six in ten (58 percent) report closely following  news about how many people have enrolled in health insurance options under the ACA. This share is up from 55 percent in April and 48 percent in March. 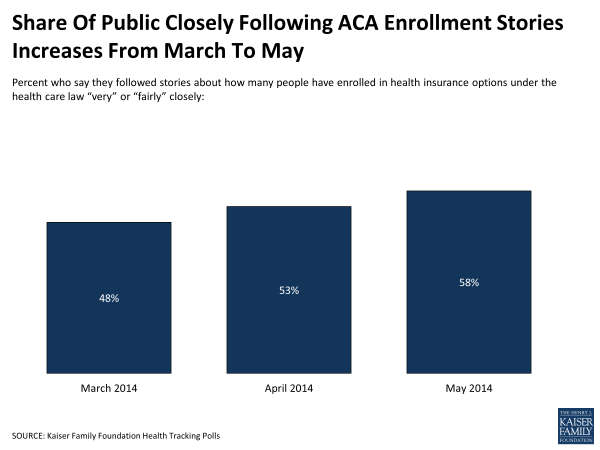 The only other health policy story that captured a significant share of public attention this month was reporting on the rate of growth in national health care spending, followed closely by 48 percent. Other non-health stories followed by about half the public include discussions of the federal budget (51 percent) and the National Climate Assessment report about the present and future impacts of climate change (50 percent). Slightly fewer (42 percent) followed the release of a White House task force report about sexual assault on college campuses.

Other breaking health policy stories were not closely followed by the public this month. Just under a quarter (23 percent) report closely following reports of insurance company’s first quarter profits, and even fewer say they followed Senate confirmation hearings for Health and Human Services Secretary nominee Sylvia Burwell and Oregon’s decision to switch from its state-run health insurance marketplace to the federal marketplace (19 percent each).