Other than the big stories of Ferguson, Ebola and ISIS, the only other news which captured a majority of the public’s attention this month was President Obama’s executive order on immigration (followed very or fairly closely by 63 percent). Smaller, yet substantial, shares report closely following many health policy news stories this month. Over four in ten say they closely followed the lawsuit filed by House Republicans against President Obama over the implementation of the health care law (45 percent) and about a third say they followed a change in the official estimate for the number of people that enrolled in health insurance during the ACA’s first open enrollment period (34 percent) and the ACA’s second open enrollment period (28 percent). A third also report closely following the allegations of sexual assault against comedian and actor, Bill Cosby (34 percent). The least closely followed health policy story of those asked about this month, was coverage of comments about the ACA made by MIT health economist, Jonathan Gruber (followed closely by 22 percent, including one in ten who say they followed the story “very closely”). 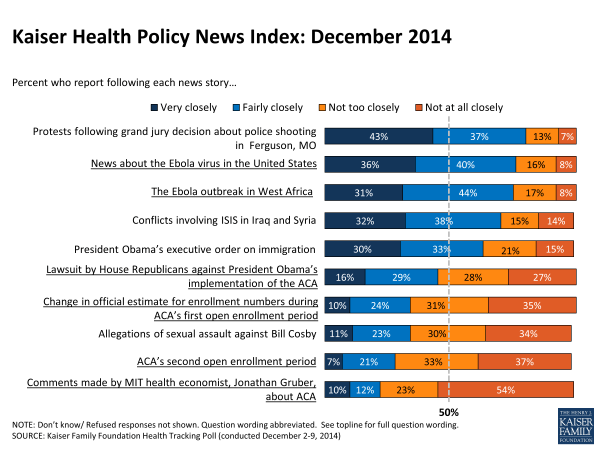 A Deeper Look At The ACA In The News This Month

After news coverage of Ebola at home and abroad, the most closely followed health policy story this month was the lawsuit filed by House Republicans against President Obama regarding the implementation of the health care law (closely followed by 45 percent of the public). The public is more-or-less divided about the House Republicans’ motivations for the lawsuit, with half (50 percent) saying the Republicans are trying to gain political advantage and about four in ten (38 percent) saying the Republicans are suing mainly because they believe the president overstepped his legal authority. 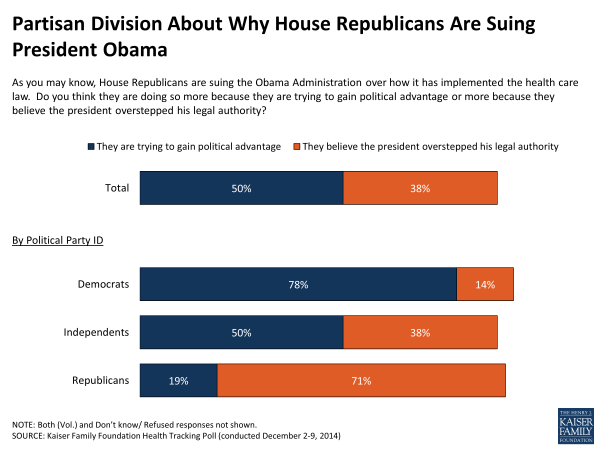 Revisions To The Official Enrollment Estimate

In other health policy news, about a third (34 percent) of Americans report closely following the revision to the official estimate for the number of people that enrolled in health insurance during the health care law’s first open enrollment period. The number of enrollees was revised downward from 7.3 million to 6.7 million because enrollees in dental plans were incorrectly included in the original count1.

However, when asked whether the revised number of enrollees is larger or smaller than the originally reported number, about three in ten (28 percent) correctly answer that it is smaller, over four in ten (43 percent) incorrectly say the revised number is larger and another three in ten (29 percent) do not know. Even among those who report closely following the news coverage of the number revision, still only a third (32 percent) answered correctly. There is a large partisan divide in response to this factual question; further evidence of the underlying partisan perceptions of the law. Republicans are much more likely than their Democratic counterparts to correctly answer that the revised number is smaller than the original (42 percent vs. 19 percent) and independents fall in between (27 percent). 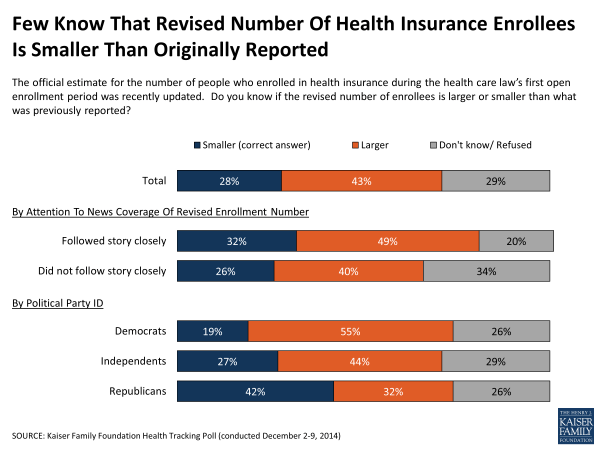 The ACA’s second open enrollment period, which began November 15th, by many accounts is off to a smoother start than the troubled launch of the first open enrollment period in October 2013, and just over a quarter say they are closely following it in the news (28 percent). When asked how the website’s functionality compares with last year, nearly half of the public (48 percent) say there have been fewer problems, 31 percent say the number of problems is about the same, and only 9 percent say there are more. 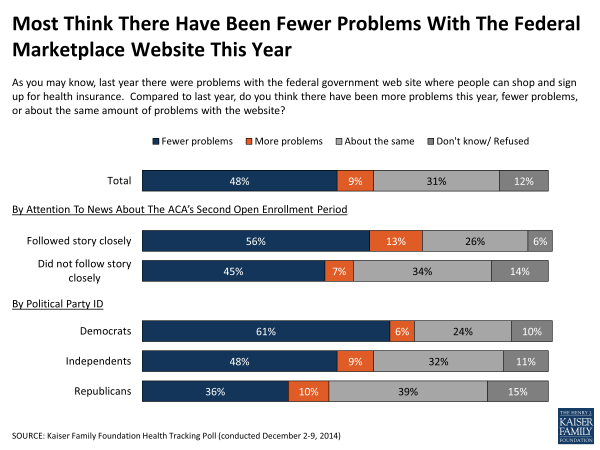 A majority of Democrats (61 percent) and nearly half (48 percent) of independents say there have been fewer problems this year, while Republicans are less likely to say so (36 percent). But across party lines, small shares they think there have been more problems with the website this year.

Awareness Of US Supreme Court Case On Financial Assistance Under ACA

The U.S. Supreme Court announced in early November that it will hear a case about whether low- and moderate-income people in states with marketplaces operated by the federal government will remain eligible for financial help from the government to buy health insurance. A large majority (84 percent) of the public say they have heard “only a little” (29 percent) or “nothing at all” (55 percent) about the case before the Supreme Court.

In addition to few hearing about the Supreme Court case, Americans are also largely unaware that 37 states are currently using the marketplace operated by the federal government, Healthcare.gov. Nearly half (46 percent) of the public incorrectly say less than half (29 percent) or just a few (17 percent) use the federal marketplace and 9 percent say “almost all”, while 18 percent say they don’t know. Roughly three in ten responded correctly that more than half (28 percent) of states use the marketplace operated by the federal government. 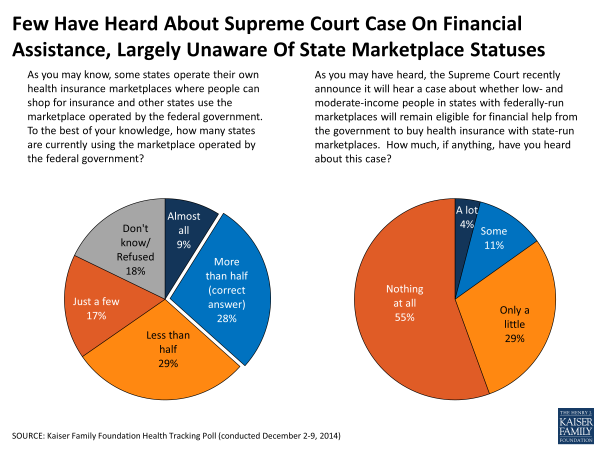 To cap off the first year of the new Kaiser Health Policy News Index, we asked the public, in their own words, what news story they have followed most closely this year. About a quarter (23 percent) referred to recent news about use of force among police, including many that referred to specific cases such as the case of Michael Brown, an unarmed African American young man in Ferguson, Missouri who was shot by a white police officer; a case that has sparked nationwide protests after a grand jury decided not to indict the police officer involved. Ranking third on the list, behind news about foreign policy (13 percent), comes health care with 9 percent of the public saying it’s the news story they’ve followed most closely this year, including 5 percent that specifically said the ACA.

A look back at the Kaiser Health Policy News Index surveys throughout the year shows the top 5 health-related stories followed closely by the public include Ebola in the United States (79 percent in November) and in West Africa (78 percent in November) (despite only 4 percent of the public volunteering Ebola when asked in their own words). Fewer, but still about 6 in 10 Americans say they closely followed the Veteran’s Affairs scandal about waiting lists at VA facilities (64 percent in July), debate over whether for-profit companies are required to cover birth control in their health benefits packages (59 percent in July), and coverage of the ACA enrollment numbers (58 percent in May). With the exception of Ebola, these stories were followed closely by slightly fewer than those who followed non-health stories such as conflicts in Ferguson, Missouri (80 percent in December), the missing Malaysia Airlines flight (77 percent in March), and conflicts involving ISIS in Iraq and Syria (71 percent in November). 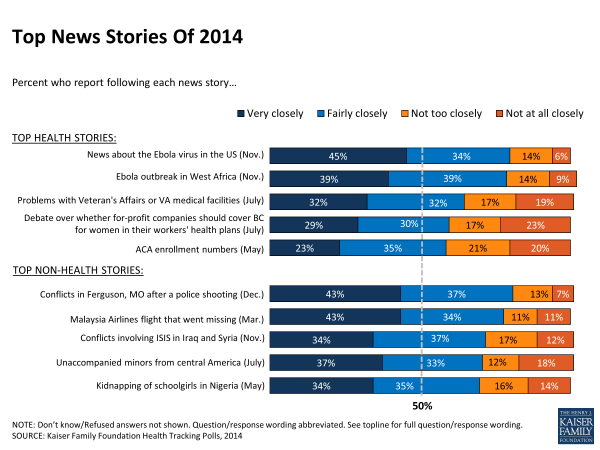