Poll: Obamacare Is Not a Big Issue With Midterm Voters

This was published as a Wall Street Journal Think Tank column on October 28, 2014. 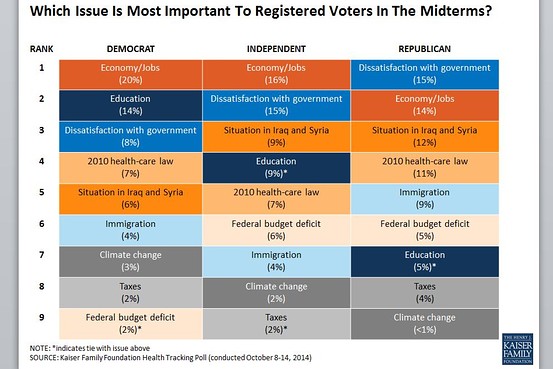 Last fall, with the HealthCare.gov rollout making headlines, it was reasonable to think the Affordable Care Act might be a big issue in the midterms. But a year later, with implementation moving much more smoothly, the health-care law does not appear to be much of a vote-mover. When asked to choose the most important issue to their vote in the upcoming midterm election, just 8% of registered voters picked the health-care law in October Kaiser Family Foundation polling. That put the ACA behind the economy (16%) and dissatisfaction with government (12%); as an issue it ranked on par with education (10%), the situation in Iraq and Syria (9%), and immigration (6%). Twenty-nine percent of voters did not say that any of the nine issues Kaiser asked about were extremely important to their vote. That could be because no single issue outshines another or because voters consider other factors–such as their views of candidates’ personal characteristics–more important.

In a midterm, what matters most are the views of the smaller slices of the electorate most likely to turn out. When it comes to the ACA this includes Republicans, especially the far right, which has always been the most passionately opposed to Obamacare. Here, too, as the chart above shows, the ACA is no longer a guiding issue for Republicans; it is now just one of many issues on the minds of Republican voters, as it is for independents and Democratic voters too.

In August and September we looked beyond the typical partisan splits at “more enthusiastic” voters. The ACA does not seem to be the dominant factor behind their enthusiasm. These people are no more likely than others to choose health care as one of the most important issues deciding their vote; 14% cite health care–including 6% who name the ACA specifically–which ranks the issue behind the economy (21%) and foreign policy/defense (16%). When these voters were asked to say in their own words why they’re more enthusiastic about casting a ballot this year, the most common responses relate to a desire to elect more Republicans or help Republicans gain control of the Senate (13%), followed by a general sense that participation is important (10%), a desire to change who is in office or get rid of incumbents (10%), a general desire for change (8%), dissatisfaction with the way government is working (8%), and the overall direction of the country (8%). Just 3% of “more enthusiastic” voters mention the health-care law as the main reason for their enthusiasm. About two dozen other issues garnered less than 3%.

The ACA has always been a proxy for the right for their dislike of President Barack Obama and the direction of the country. As the ACA cools as a political issue, a mix of issues appears to be replacing it and any other single issue as a rallying point for Republican voters.