After taking a negative turn in October, the public’s overall views on the Patient Protection and Affordable Care Act (ACA) returned to a more mixed status this month. Still, Americans remain somewhat more likely to have an unfavorable view of the law (44 percent) than a favorable one (37 percent).

The Kaiser Family Foundation’s November Health Tracking Poll also finds that individual elements of the law are viewed favorably by a majority of the public. The law’s most popular element, viewed favorably by more than eight in ten and “very” favorably by six in ten, is the requirement that health plans provide easy-to-understand benefit summaries. Also extremely popular are provisions that would award tax credits for small businesses and provide subsidies to help some individuals buy coverage, as well as the provision that would gradually close the Medicare doughnut hole and the “guaranteed issue” requirement that prohibits health plans from denying coverage based on pre-existing conditions. Far and away the least popular element of the ACA is the individual mandate, the requirement that individuals obtain health insurance or pay a fine. More than six in ten Americans view this provision unfavorably, including more than four in ten who have a “very” unfavorable view.

The November poll also measured Americans’ familiarity with various elements of the law, which groups they expect to be helped or harmed, and their impressions of news media coverage of the ACA. 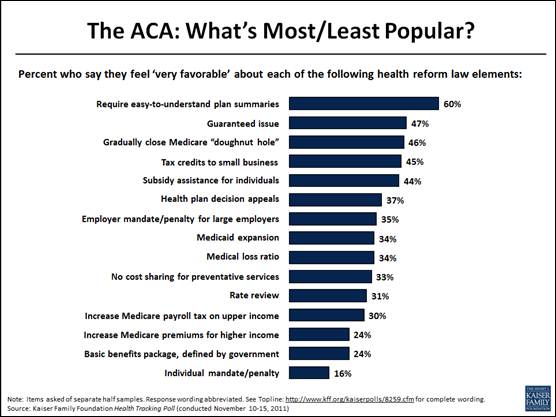