August Kaiser Health Tracking Poll: A Look At The GOP As The Republican Convention Draws Near

Despite the ongoing focus on Republican opposition to the Affordable Care Act (ACA), the latest Kaiser Health Tracking Poll finds that the ACA is not the top health care priority among Republicans. While jobs are still the number one issue, when asked about the health care issues that will impact their vote this fall, Republicans’ top concern was the cost of health care and insurance, named by two-thirds as either “extremely” or “very important” to their vote. Next on the list was Medicare, cited by six in ten Republicans as being important to their vote, while the ACA ranked third, at 54 percent.

When it comes to Medicare, a hot topic in the news with the addition of Representative Paul Ryan to the presidential ticket, another recent Kaiser survey conducted in partnership with The Washington Post finds that a majority of Republicans (55 percent) prefer the idea of keeping Medicare as it is rather than changing to a system in which seniors are guaranteed a fixed amount of money that could be used to purchase coverage “either from traditional Medicare or from a list of private plans.”

Even though more than four in ten Republicans say they don’t have a “basic understanding” of what Governor Romney is proposing to do on health care if elected president, a majority (79 percent) believe his approach to health care would be different than that of President Barack Obama and a similar share say they trust him to make the “right decisions” about the future of the ACA.

For more, including a comparable look at Democrats’ views on health care issues as well as familiarity with key provisions of the ACA, overall public opinion on the law and the full methodologies of the two surveys, see the August Kaiser Health Tracking poll and the Washington Post/KFF poll online. 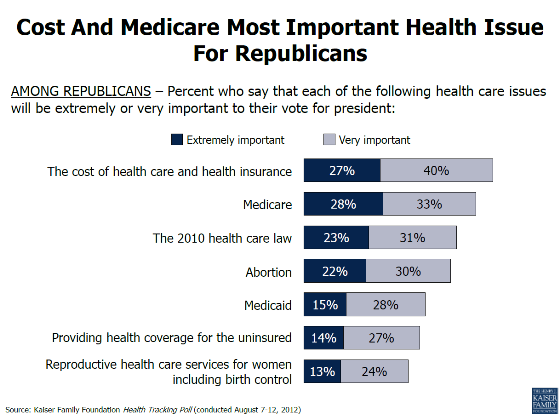