This was published as a Wall Street Journal Think Tank column on May 20, 2015. 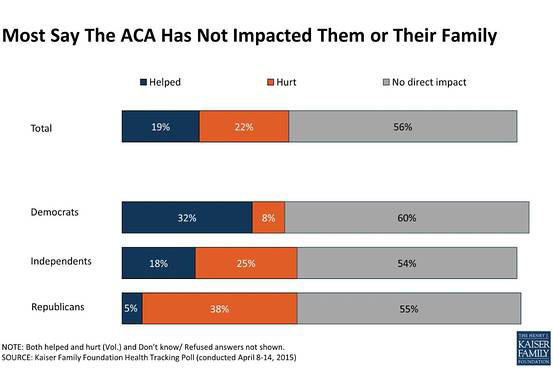 One reason the Affordable Care Act gets mixed reviews is the persistent and sharp partisan divide in public opinion on the law. But a less appreciated reason for this is simply that many more people benefit from the ACA than may realize it.

More than half of Americans say the health reform law has had no impact on them or their family, Kaiser Family Foundation Health Tracking Polls have found. As the chart above shows, that’s true of Democrats (60%), independents (54%), and Republicans (55%).

But the ACA benefits more people than say it has affected them and far more than the approximately 23 million more people who have signed up for a marketplace plan or Medicaid as a result of the law.

For example, 49% of Americans say they or a family member have a pre-existing medical condition such as heart disease, diabetes, asthma, or cancer; and a quarter say someone in their family had been denied coverage or had their premium raised because of it. The ACA solves this problem for all these people by eliminating underwriting for pre-existing conditions, giving them peace of mind that they can get coverage if they lose employer-based insurance or the ability to buy health coverage if they are in the non-group market.

Insurers are also now required to cover a range of recommended preventive services, such as screenings for cancer, diabetes, and high blood pressure, as well as flu shots, without additional cost-sharing such as co-pays or deductibles.

The Obama administration released a report last week estimating that 137 million people are eligible for these no-cost prevention and screening services, which are guaranteed for everyone with private insurance except those in grandfathered plans that people had before the law passed in 2010.

The law also eliminated lifetime caps on insurance coverage, something the government estimates affected 105 million people who faced the possibility of using up their insurance if they had a serious illness.

Such ACA-related insurance reforms affect many Americans, and these provisions are popular with the public. But as the Kaiser poll findings show, Americans don’t always connect the benefits with the law. It’s likely that many people just don’t know that the law is responsible for their free flu shot, or contraceptive coverage, or their ability to get coverage if they have a pre-existing condition. These new benefits are provided by insurers or employers without a promotional label reading “brought to you by the ACA.”

To be sure, there are some unpopular features of the ACA that many Americans are not fully aware of, such as the “Cadillac tax” on higher-cost health plans set to take effect in 2018 (and that could lead to some employers scaling back coverage). People are, however, very aware of the law’s most unpopular feature: the individual mandate.

The ACA may never be as popular as Medicare or Social Security, programs in which people enroll and from which they receive common benefits–something that makes these programs almost sacrosanct. But gradually, more people may become aware of the popular benefits the ACA provides beyond expanding coverage for the uninsured.