A number of states have recently released information on what premiums will be in the individual insurance market in 2014, when significant changes in that market take effect due to the Affordable Care Act (ACA). In some cases, states have provided estimates of how those premiums compare to what people buying their own insurance are paying today.

Why Premiums in the Individual Market Will Change

There are a number of reasons why individual market premiums will change, both overall and for any given individual now buying coverage:

Premiums will be higher in 2014 for some current individual market purchasers and lower for others, and on average will likely be higher in most states.

Premium subsidies (in the form of federal tax credits) will be available for people buying their own insurance in new marketplaces or exchanges who have incomes from 100% up to 400% of the poverty level (about $24,000 to $94,000 per year for a family of four in 2014). Those with access to affordable employer-provided insurance or Medicaid are ineligible for tax credits.

The amount of the tax credit is based on a benchmark premium, which is the cost of the second-lowest-cost silver plan in the area where a person lives. The tax credit equals that benchmark premium minus what the individual is expected to pay based on their family income (which is calculated on a sliding scale from 2% to 9.5% of income).

Here is how the calculation might work for a 40-year-old individual making $30,000 a year:

The tax credit can be used in any plan offered in the health insurance marketplace, so the person would end up paying less than $2,512 to enroll in the lowest cost silver plan or a lower cost bronze plan, and more to enroll in a higher cost plan. A calculator from the Kaiser Family Foundation provides subsidy estimates for families of varying characteristics.

While premium tax credits will provide substantial subsidies to people now buying individual insurance, it can be difficult to characterize the level of subsidies because they vary so much based on personal characteristics (e.g., age, income, family size, and place of residence). To provide a sense of how much assistance these subsidies will provide, we quantified how much of a tax credit on average current individual market enrollees will be eligible for. We look at people who are currently purchasing their own insurance and are anticipated to continue to do so in 2014 because they do not have access to employer coverage and are not eligible for Medicaid (including expanded Medicaid eligibility in states that have adopted the ACA expansion) or the Child Health Insurance Program.

Our analysis – which is described more fully in the methodology appendix – is based on premium estimates from the Congressional Budget Office (CBO) and the characteristics of current individual market enrollees in the federal government’s Survey of Income and Program Participation. While our premium estimate is based on CBO’s projection and actual premiums will vary from area to area, the premium values we are using are consistent with those that have been released to date in several states.

Using CBO’s estimate of an average premium for the second-lowest-cost silver in 2016, we estimate that the national average benchmark premium for a 40-year-old in 2014 would be $3,857 per year (or $321 per month). Benchmark premiums at other ages are based on uniform age factors that have been established in regulations issued by the Department of Health and Human Services.

We estimate that current individual market purchasers will face an average premium per family for the second-lowest-cost silver plan of $8,250 in 2014. This is an average premium across families of all sizes. Most current individual market enrollees are in families of one person (55%) or two people (29%). (Note that for the purposes of tax credit eligibility under the ACA, families are defined as including people who are claimed as dependents on an income tax return. Our estimates reflect that definition to the extent possible with data available.)

About half (48%) of people now buying their own insurance would be eligible for a tax credit that would offset their premium. This does not include over one million adults buying individual insurance today who will be eligible for Medicaid starting in 2014 (i.e., they have family income up to 138% of the poverty level and are living in states that have decided to expand Medicaid under the ACA).

Tax credits have the potential to cover a substantial portion of the premiums paid by current individual market enrollees: 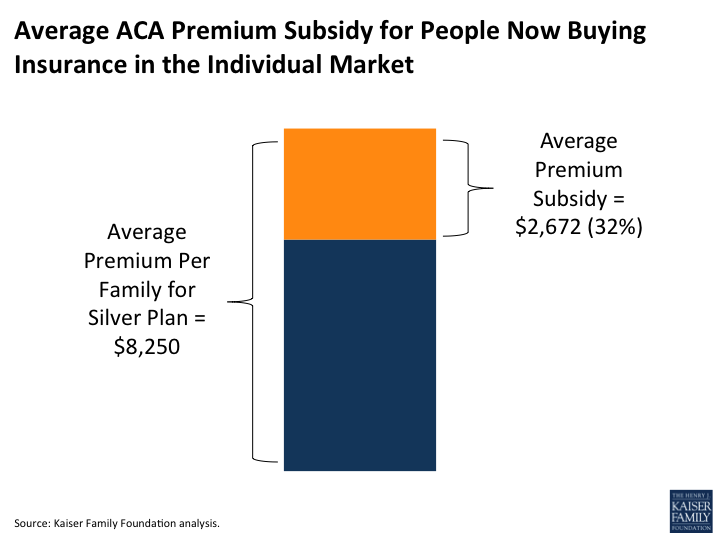