Among the Insured with Medical Bill Problems, 63% Report Using Up Most or All Their Savings and 42% Took on an Extra Job or Worked More Hours

Half of People Without Health Insurance Report Problems With Medical Bills, and They Face Similar Financial and Personal Consequences As Those With Insurance

Among people with health insurance, one in five (20%) working-age Americans report having problems paying medical bills in the past year that often cause serious financial challenges and changes in employment and lifestyle, finds a comprehensive new Kaiser Family Foundation/New York Times survey. As expected, the situation is even worse among people who are uninsured: half (53%) face problems with medical bills, bringing the overall total to 26 percent.

While insurance can protect people from problem medical bills, the survey suggests that those with employer coverage or other insurance suffer similar consequences as the uninsured once such problems occur. Among those facing problems with medical bills, almost identical shares of the insured (44%) and uninsured (45%) say the bills had a major impact on their families.

People with insurance who face problem medical bills also report a wide range of consequences and sacrifices during the past year as a result, including delaying vacations or major household purchases (77%), spending less on food, clothing and basic household items (75%), using up most or all their savings (63%), taking an extra job or working more hours (42%), increasing their credit card debt (38%), borrowing money from family or friends (37%), changing their living situation (14%), and seeking the aid of a charity (11%). These shares generally are as large as or larger than the shares among uninsured people with problem medical bills. 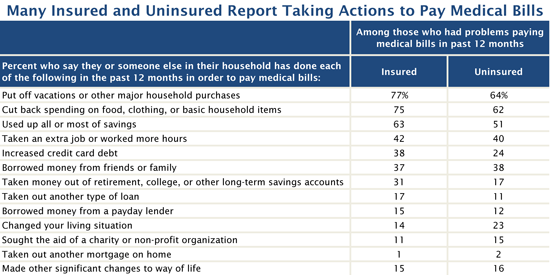 Overall, 62 percent of those who had medical bill problems say the bills were incurred by someone who had health coverage at the time (most often through an employer). Of those who were insured when the bills were incurred, three-quarters  (75%) say that the amount they had to pay for their insurance copays, deductibles, or coinsurance was more than they could afford.

People with health insurance who have problems with medical bills also report skipping or putting off other health care in the past year because of the cost, such as postponing dental care (62%), skipping doctor-recommended tests or treatments (43%), or not filling a prescription (41%). In general, people with medical bill problems are two to three times as likely to report each of these problems as those without problems paying medical bills.

The Kaiser/Times survey provides an in-depth, quantitative look at the extent and causes of Americans’ medical-debt issues and their impact on people’s lives, families, finances and access to health care.  The New York Times is reporting on the findings this week, and the Foundation is issuing a report detailing the survey’s results and implications.