Annual family premiums for employer-sponsored health insurance rose 4% to average $22,221 this year, according to the 2021 benchmark KFF Employer Health Benefits Survey released today. On average, workers this year are contributing $5,969 toward the cost of family coverage, with employers paying the rest. This year’s survey also assesses how the pandemic affected workplace health benefits, including mental health services and telemedicine.

The annual change in premiums roughly matches the year-to-year rise in workers’ wages (5%) and inflation (1.9%), though what workers and employers pay toward premiums over time has risen more quickly. Since 2011, average family premiums have increased 47%, more than wages (31%) or inflation (19%).

About 155 million Americans rely on employer-sponsored coverage, and the 23rd annual survey of nearly 1,700 small and large employers provides a detailed picture of the trends affecting it. In addition to the full report and summary of findings released today, the journal Health Affairs is publishing an article with select findings online and in its December issue. 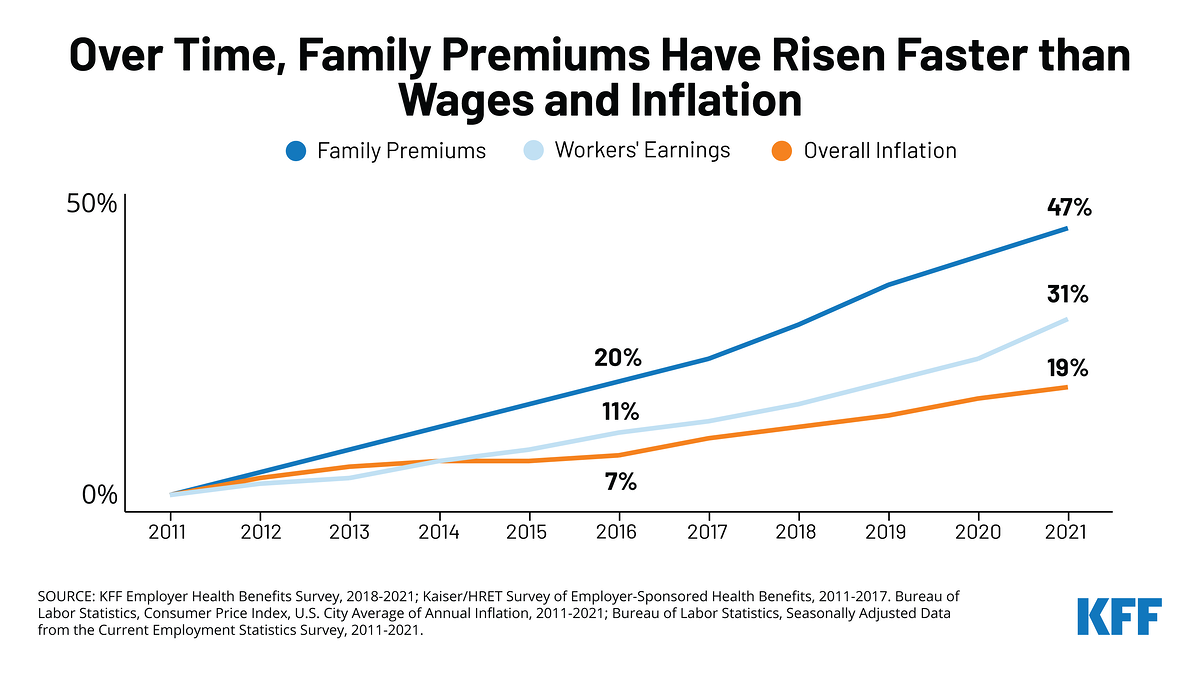 Among large employers with at least 200 workers, half report that health-care utilitization among their plan enrollees has been about what they expected for the most recent quarter. More say utlization has been below expectations (32%) than above it (18%), consistent with other data showing a slowdown in total health spending during the COVID-19 pandemic.

“In a year when the pandemic continued to cause health and economic disruption, there were only modest changes in the cost of employer-provided health benefits,” said Gary Claxton, a KFF senior vice president and director of the Health Care Marketplace Project. “Some employers adapted their plans to address mental health and other challenges facing their workers due to COVID-19.”

Among firms with at least 50 workers that offer health benefits, almost four in 10 (39%) report making changes to their mental health and substance abuse benefits since the beginning of the pandemic.

This includes 31% who increased the ways enrollees can access mental-health services, such as through telemedicine; and 16% who offered new mental health resources, such as an employee assistance program. Small shares say they expanded their in-network mental health and substance abuse providers (6%), waived or reduced cost-sharing for related services (4%) or increased coverage for out-of-network services (3%).

Overall 12% of employers with at least 50 workers that offer health benefits reported an increase in their enrollees’ use of mental-health services. Among the largest employers (with 1,000 or more workers), more than a third (38%) reported such an increase.

Other COVID-related findings include:

• More than half (55%) of offering firms with at least 50 workers say they made changes to their wellness programs due to the pandemic. The most common changes involve expanding online counseling services (43%), expanding or changing existing programs to better meet the needs of people working from home (22%), and adding a new digital program such as an app (17%). 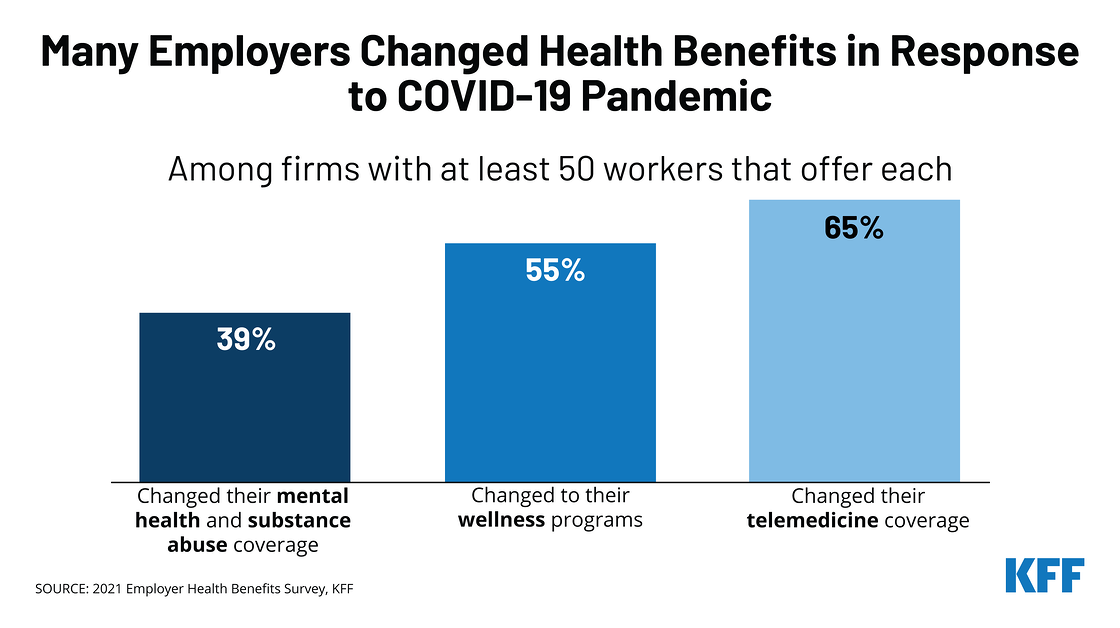 “The expansions of telemedicine and mental health benefits were important in meeting the needs of employees and their families in difficult times,” write Claxton; Matthew Rae, associate director of KFF’s Program on the Health Care Marketplace; and co-authors in Health Affairs. “These types of changes made sense not because employers want to spend more, but because employers want their employees to see their health benefit programs as ‘benefits’ and to value them as such.”

Average Deductible Now Stands at $1,669 This Year; Burden is Up 92% Over Past Decade

Combined, the growing share of workers with deductibles and rising average deductibles over the past decade have increased the burden of deductibles by 92% across all covered workers.

• Offer rate holds steady. The survey finds 59% of employers offer health benefits, largely unchanged over the past decade. The larger an employer is, the more likely it is to offer health benefits to at least some of its workers, with nearly all (99%) firms with at least 200 or more workers and about half (56%) of firms with fewer than 50 workers offering coverage. Small firms that don’t offer coverage most often cite cost (30%), their small size (25%), and workers having other coverage (21%) as the most important reason.

• Price transparency. With new federal rules requiring health plans to make information available to enrollees about the costs of services, a quarter (26%) of firms with at least 200 workers say they expect the information will help employees’ health care decisions “a great deal.” Few (3%) say the requirements will reduce health spending “a great deal.”

KFF conducted the annual employer survey between January and July of 2021. It included 1,686 randomly selected, non-federal public and private firms with three or more employees that responded to the full survey. An additional 2,413 firms responded to a single question about offering coverage. For more information on the survey methodology, see the Survey Design and Methods Section.