Among People with Employer Coverage, Those with Persistently High Spending for Several Years Averaged Almost $88,000 in Health Spending in 2017

Among people with three consecutive years of coverage from a large employer, just 1.3 percent of enrollees accounted for 19.5 percent of overall health spending in 2017, finds a new KFF analysis. These “people with persistently high spending” – people in the top five percent of spending in each of the three years from 2015 to 2017 – had average health spending of $87,870 in 2017. That compared to average per person spending of $5,870 among all large group enrollees during that period. 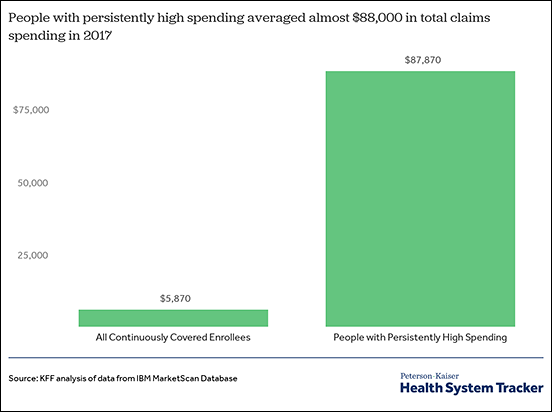 Overall, health spending is highly concentrated: a small share of people account for most health care spending in any year. This group changes from year to year as some people experience serious illness and recover, but a portion of the group continues to have high spending for longer periods.  Their extensive health needs and predictably high spending make them an important focus for any efforts to lower costs and improve quality.