Visibility of U.S. Global Health Efforts Declining: 36% Have Heard a Lot or Some about U.S. Efforts in the Past Year, Down from 57% in 2010

Strong Support for U.S. Role in Combatting Zika At Home and Abroad

When it comes to world affairs, majorities of Americans list fighting terrorism (64%), protecting human rights (60%), and protecting the environment and fighting climate change (51%) as top priorities for the president and Congress, finds a new Kaiser Family Foundation survey of the public’s views on the United States’ role in global health.

Global health ranks somewhat lower on the public’s priority list, with about a third (35%) of Americans saying it is one of the top priorities for U.S. engagement in world affairs, and half (51%) listing it as an important priority. 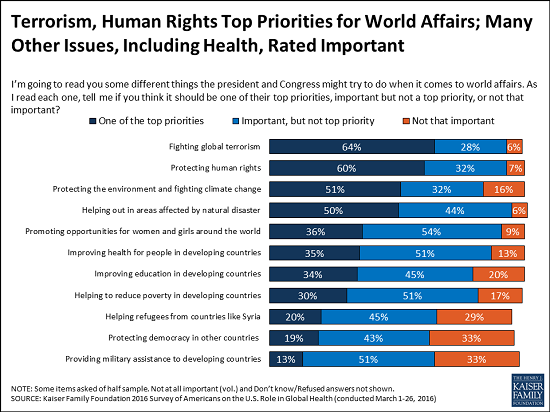 When asked specifically about U.S. global health efforts, 69 percent of Americans say improving access to clean water should be one of the top priorities; followed by combating disease outbreaks like Ebola and Zika (62%), improving children’s health, including vaccinations, (61%) and reducing hunger and malnutrition (61%).

Eight in ten Americans have heard or read at least something about the Zika virus. When it comes to strategies to combat the virus’s rapid spread, large majorities of this group support a wide range of efforts, saying the U.S. should invest resources to prevent Zika’s spread in the U.S. (90%), invest more money in research on the virus (83%), help women in countries with outbreaks access birth control (77%), and provide financial aid to countries with outbreaks (72%). The poll was conducted before the current debate in Washington about redirecting current funding to fight Zika or provide new funding instead, and did not ask about that question.

Most Americans (61%) overall are aware of the association between the Zika virus and birth defects in pregnant women, which has sparked intense concern from public health officials in the U.S. and globally.  (The survey was conducted before last week’s announcement by the Centers for Disease Control and Prevention confirming this link.)

Of those who have heard or read about Zika, 65 percent say women in affected countries do not have adequate access to birth control, compared to 16 percent who think they have adequate access and 18 percent who don’t know or don’t think women should have access to birth control. This group is split on whether the U.S. is doing enough to help women in these countries make decisions on family planning and preventive health, with 33 percent saying it is, 34 percent saying it isn’t, and 30 percent saying they don’t know enough to say.

Designed and analyzed by public opinion researchers at the Kaiser Family Foundation, the survey was conducted March 1-26 2016, among a nationally representative random digit dial telephone sample of 1,508 adults. Interviews were conducted in English and Spanish by landline (606) and cell phone (902). The margin of sampling error is plus or minus 3 percentage points for the full sample. For results based on subgroups, the margin of sampling error may be higher.