But, As of Last Week, Majorities across Party Lines Said the U.S. Government is Doing Enough to Prevent the Virus’ Spread

Fielded prior to Monday’s steep U.S. stock market declines, the poll finds most Americans (83%) have read or heard at least some about the coronavirus outbreak that started in December in Wuhan province in China and has since spread to other countries, with dozens of confirmed cases so far in the U.S. A similar majority (87%) are aware there have been cases diagnosed in the U.S.

So far, nearly seven in 10 Americans (69%) say that U.S. government officials are “doing enough” to prevent the spread of coronavirus. This includes majorities of Republicans (80%), independents (70%) and Democrats (60%).

“The public largely seems comfortable with the government’s response so far, but those perceptions could change if we see more U.S. cases and deaths,” KFF Senior Vice President Jen Kates said. 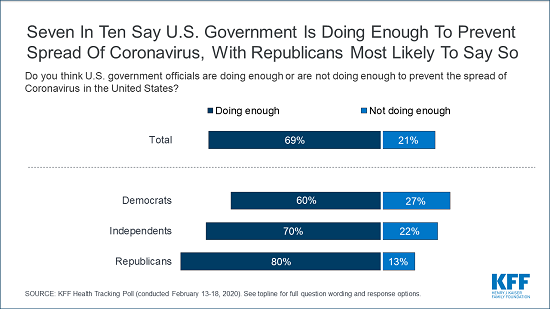 Designed and analyzed by public opinion researchers at KFF, the poll was conducted February 13-18, 2020 among a nationally representative random digit dial telephone sample of 1,207. Interviews were conducted in English and Spanish by landline (302) and cell phone (905). The margin of sampling error is plus or minus 3 percentage points for the full sample. For results based on subgroups, the margin of sampling error may be higher.

KFF also has an interactive map, updated regularly, that captures the number of confirmed coronavirus cases and deaths by country across the globe.