With Some Red States Opening Up, Most Republicans Say “the Worst is Behind Us,” While Most Democrats and Independents Say the “Worst is Yet to Come”; Mixed Receptivity to Using Smart Phone Apps to Trace Potential Contacts with Infected People

With President Trump and some Republican governors pushing to restart the nation’s economy, most of the public (80%) supports strict shelter-in-place policies to limit the coronavirus’ spread compared to just one in five (19%) who say these measures pose unnecessary burdens and cause more harm than good, the latest KFF Health Tracking Poll finds. 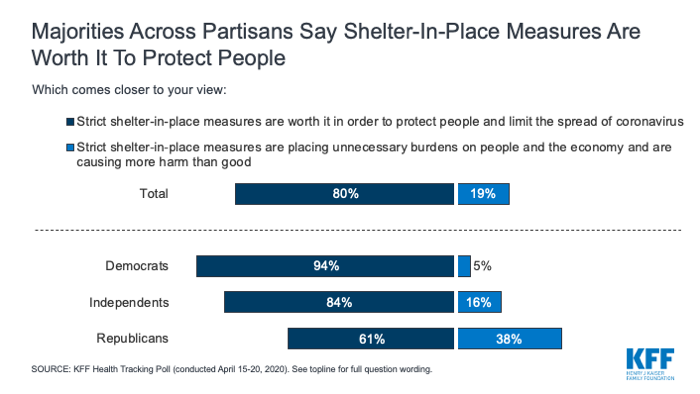 About half the public overall (51%) now says the worst is yet to come, down from 74% three weeks earlier. Republicans’ growing optimism is a major reason for this shift.

Three in four Americans (76%) say they bought or made a protective mask to wear in public, consistent with many social distancing guidelines issued by states. Those living in counties where more than 25 people have died from COVID-19 are more likely than those living in counties with 5 or fewer deaths to report using a mask (82% vs. 69%).

Public health officials say that tracing and monitoring the contacts of infected people is a key element of any plan to contain the COVID-19 pandemic once people return to work, school and everyday life, and some have discussed using people’s smart phones to aid that effort.

The poll finds the public is divided on whether they would download an app on their phone to notify them when they come into close contact with an infected person (50% would, 47% wouldn’t) or to share their close contacts with public health authorities to aid tracking efforts (45% would, 53% wouldn’t). 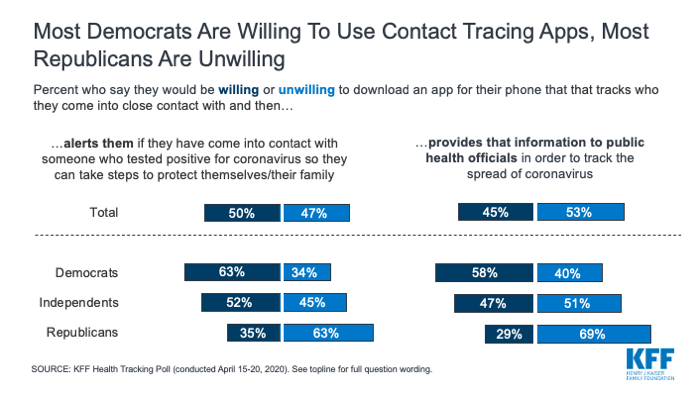 Younger adults generally are more willing to use apps for contract tracing than are older adults. For example, more than half (53%) of 18-29 year olds and just 36% of those ages 65 and over are willing to download an app to share contact information with public health officials.

“The mixed receptivity to using voluntary apps for contact tracing means that they can be an important tool to combat the pandemic but will not be a substitute for old-fashioned contact tracing”, KFF President and CEO Drew Altman said.

The poll finds that arguments that connect the use of such contact-tracing apps to people’s ability to return to work and allow businesses to reopen can increase people’s willingness to use them. Two-thirds (66%) say they would be willing to use them after hearing such arguments. In contrast, an argument about the risk of such information being hacked lowers the share willing to use such apps to 28%.

While majorities of Democrats and independents and about half of Republicans are willing to download a contract tracing app if the data was managed by the CDC or their state or local health department, fewer than four in ten Democrats (37%), one-third of independents, and one-fourth of Republicans (26%) say they are willing to download such an app if the data was managed by a private tech company.

Designed and analyzed by public opinion researchers at KFF, the poll was conducted April 15-20, 2020 among a nationally representative random digit dial telephone sample of 1,202 adults. Interviews were conducted in English and Spanish by landline (261) and cell phone (941). The margin of sampling error is plus or minus 3 percentage points for the full sample. For results based on subgroups, the margin of sampling error may be higher.

KFF will release additional findings from this poll related to the crisis’ impact on Americans’ mental health and finances in the coming days.