Kaiser/UNAIDS Analysis Finds Donor Governments Spent US$8 Billion for HIV in 2018, Similar to a Decade Ago

U.S. Remains Top Donor, Providing More Than Half the Total

Donor government disbursements to combat HIV in low- and middle-income countries totaled US$8 billion in 2018, little changed from the US$8.1 billion total in 2017 and from the levels of a decade ago, finds a new report from the Kaiser Family Foundation (KFF) and the Joint United Nations Programme on HIV/AIDS (UNAIDS).

The United States remains the world’s largest donor for HIV by far, disbursing US$5.8 billion last year, and also ranks first in disbursements relative to the size of each donor’s economy. The next largest donors are the United Kingdom (US$605 million), France (US$302 million), the Netherlands (US$232 million) and Germany (US$162 million).

Since 2010, donor governments, other than the United States, significantly reduced their funding for HIV, which fell by more than $1 billion in the aftermath of the global financial crisis, and with the competing aid demands of a global refugee crisis and other humanitarian challenges. Most of the decline was in bilateral support.

These donors increased their support for the Global Fund to Fight AIDS, Tuberculosis and Malaria over this period, but not by enough to offset a large drop in bilateral support. When factoring how the Global Fund divides its resources among the three diseases, and reduced funding for UNITAID, multilateral support for HIV has also fallen since 2010.

The data on donor government funding for HIV feed into the broader UNAIDS report Communities at the Centre, which examines all sources of funding for HIV relief, including local governments, non-governmental organizations and the private sector, and compares it to need. According to estimates from that report, there was a decline of $1 billion across all sources of funding between 2017 and 2018, leaving a $7 billion gap between resources and need in 2020 after adjusting for inflation.

“Donor contributions are vital for the AIDS response, particularly in East and South African countries, except South Africa, where the majority of countries rely on donors for 80% of their HIV responses,” said Gunilla Carlsson, Executive Director a.i., UNAIDS. “It is disconcerting that in 2018, total available resources for HIV declined by US$ 1 billion. I call on all countries—domestic and donors to urgently increase their investments and close the US$ 7 billion funding gap for the AIDS response.”

“Since the global financial crisis a decade ago, donor governments’ support for HIV has flattened and funding from donors other than the U.S., which has held steady, has gone down,” said KFF Senior Vice President Jen Kates. “Unless this calculus changes, efforts to prevent and treat HIV globally will need to rely increasingly on other sources of funding.” 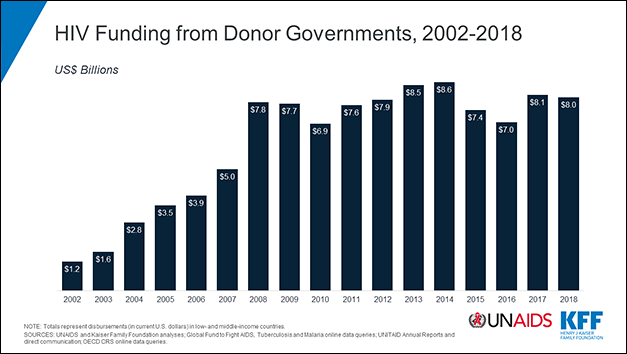 The new report, produced as a long-standing partnership between KFF and UNAIDS, provides the latest data available on donor government funding based on data provided by governments. It includes their bilateral assistance to low- and middle-income countries and contributions to the Global Fund as well as UNITAID.  “Donor government funding” refers to disbursements, or payments, made by donors.