NTDs have garnered greater attention from the U.S. government and other global donors over the last decade, spurred on by growing recognition of their potential threat to the achievement of the Millennium Development Goals (MDGs) and their successor, the Sustainable Development Goals (SDGs).3 In addition, the development and expansion of an integrated NTD treatment approach capitalized on the availability of safe and effective treatments for the most prevalent NTDs.

Neglected Tropical Diseases (NTDs): A group of parasitic, bacterial, and viral infectious diseases that primarily affect the most impoverished and vulnerable populations in the world and, as such, have received scant attention until the past decade.4

NTDs are among the top 10 major communicable disease causes of ill health globally, behind lower respiratory infections, diarrheal diseases, HIV, tuberculosis, and malaria.5 NTDs are grouped together due to their often chronic, disfiguring, and stigmatizing impact; their close association with poverty; and their geographic overlap.

NTDs have low mortality but high morbidity rates.6 More than a billion people – one-sixth of the world’s population – are infected with one or more NTDs, and an additional two billion are at risk. Each year, about 185,000 people die as a result.7 Infection with an NTD may result in severe disability, disfigurement, blindness, and malnutrition, and individuals are often infected with multiple NTDs simultaneously. The health impact of NTDs negatively affects economic development, hampers educational achievement and cognitive development, and reduces agricultural productivity and food security.8

Endemic to almost 150 countries, NTDs span the globe.9 However, the majority of the NTD burden is concentrated in low- and middle-income countries in Africa, Asia, and Latin America.10 People living in rural areas as well as urban slums are among the most affected, since lack of access to clean water, health services, adequate housing, and good sanitation contribute to NTDs’ prevalence and impact. Women and children are most at risk of infection, since they are more exposed to NTDs and more often face barriers to accessing treatment, particularly those living in remote areas.11

While there are numerous NTDs in the world, the World Health Organization (WHO) has highlighted 20 that particularly impact poor, politically marginalized populations; cause significant morbidity and/or mortality; are neglected by research; and can be controlled using effective methods.12

Seven “tool-ready” NTDs, those that can be controlled and even eliminated due to the availability of low-cost and effective interventions, are responsible for the overwhelming majority of the NTD burden (see Table 1). This subset of NTDs is increasingly the focus of donor efforts, including USAID’s NTD Program.

A number of strategies have been successful in controlling and, in some areas, even eliminating certain NTDs. Although many interventions are relatively inexpensive, challenges persist in delivering tools and services to the most at-risk populations.

Today, the recommended strategy is an integrated control approach targeting multiple NTDs simultaneously through mass drug administration (MDA), combined with community-level transmission control measures. This allows programs to reach more people and increase cost-efficiencies over tackling each disease separately.14 MDA often uses the “rapid-impact package,” which is a combination of four drugs used to prevent or treat the seven most prevalent NTDs for as little as $0.10-$0.50 per person per year.15 The low cost of the rapid-impact package is partially due to donations of drug treatments from pharmaceutical companies, which have risen by more than 35% since 2011.16 Additional measures such as promoting clean water, sanitation, and hygiene (WASH) and good veterinary public health also play critical roles in addressing the underlying causes of NTDs.17

As NTDs began to receive greater attention and global efforts have expanded over the past ten years, major global NTD goals have been set through:

2012 WHO Roadmap for Implementation

The Roadmap outlined targets and strategies for global NTD control, elimination, and eradication efforts from 2012 through 2020. Among its goals was the eradication of dracunculiasis (Guinea worm disease) by 2015, which was not achieved but WHO reports the world is on the verge of eradicating the disease, with only 28 cases in 2018.18 Other goals are the eradication of yaws by 2020 and elimination of four NTDs – blinding trachoma, human African trypanosomiasis (sleeping sickness), leprosy, and lymphatic filariasis (LF) – by 2020.19

The Declaration was endorsed by key public and private stakeholders in 2012 and laid out global NTD goals (affirming those in the Roadmap) and commitments. It aims to improve partner efforts to coordinate and collaborate across their respective efforts in order to help eradicate Guinea worm disease and, by 2020, to help to eliminate the four NTDs mentioned above (blinding trachoma, sleeping sickness, leprosy, and LF) and to control schistosomiasis, soil-transmitted helminths, Chagas disease, visceral leishmaniasis, and onchocerciasis.21 In 2017, stakeholders attending the NTD Summit reaffirmed their London Declaration commitments through the Geneva Commitment.22

SDG 3: End the Epidemic of NTDs

Adopted in 2015 by all member-states of the United Nations, the Sustainable Development Goals (SDGs) included a target of ending the epidemic of NTDs by 2030 as part of SDG 3 (“ensure healthy lives and promote well-being for all at all ages”).23 The SDGs are the successor to the Millennium Development Goals (MDGs), which did not include a specific NTD indicator.24

Over the past fifteen years, U.S. attention to and funding for NTDs have increased markedly. Historically, the U.S. government’s response to NTDs was relatively limited, focusing largely on research and surveillance conducted by the National Institutes of Health (NIH), the Centers for Disease Control and Prevention (CDC), and the Department of Defense (DoD). In 2006, Congress first appropriated funds to the U.S. Agency for International Development (USAID) for integrated NTD control, after which the agency launched its NTD Program. In 2008, the USG announced expanded NTD efforts, building on USAID’s NTD Program.25 In 2012, the U.S. signed onto the London Declaration, and more recently, the U.S. adopted a longer term global health goal of protecting communities from infectious diseases and highlighted the important role of NTD efforts in achieving this goal.26

USAID’s NTD Program targets seven “tool-ready” NTDs (see Table 1). Having scaled up from five countries in 2006, it now spans 26 countries, mostly in sub-Saharan Africa and Southeast Asia, and has one regional program, which reaches an additional six countries in the Americas. Using interventions such as the rapid-impact package, the USG supports endemic countries in scaling up MDA and developing their capacity to manage NTD control programs. The program’s goals are to eliminate LF and blinding trachoma globally by 2020 and to increase integrated, sustainable delivery of preventive chemotherapy for all NTDs.

Other agencies support research and development (R&D) activities related to and efforts focused on encouraging adoption of control tools for NTDs, including the seven targeted NTDs as well as others not yet considered “tool-ready” (Buruli ulcer, Chagas disease, dengue, human African trypanosomiasis, leishmaniasis).29 NIH, CDC, and DoD support various NTD R&D efforts,30 while the FDA administers the congressionally-authorized Tropical Disease Priority Review Program,31 which “provides for a voucher that is awarded at the time of approval of certain drugs that prevent or treat” an NTD.32 The voucher, which can subsequently “be redeemed for a priority review of an application for a drug for any indication submitted at a later time,”33 is designed as an incentive for the private sector to invest in new NTD drug development.34 A number of vouchers have already been authorized by the FDA.35 Additionally, CDC provides technical assistance to countries and other partners, helps to develop guidelines for NTD control, and aids efforts to monitor and evaluate progress.36

Multilateral and Other Efforts

U.S. NTD efforts are coordinated with a number of international partners (like WHO and private sector entities), regional strategies (like the Regional Strategy on NTDs in the WHO African Region 2014-2020), and funding mechanisms (like the END Fund).37 For example, the pharmaceutical industry donates several NTD drugs to many of the countries that also receive USAID NTD support; USAID has estimated the value of these donations in U.S.-supported countries at approximately $22 billion since 2006.38 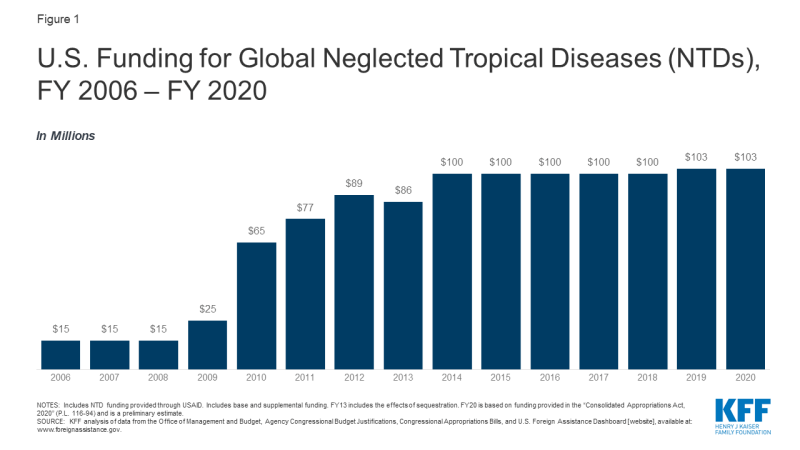 Over the past decade, U.S. global NTD efforts and funding have expanded, as have those of other entities. Today, U.S. NTD efforts are an important part of the U.S. global health agenda. Looking ahead, there are several issues and challenges facing U.S. NTD efforts, starting with questions about the extent to which the current Administration will continue to support ongoing efforts, particularly in light of FY 2020 budget proposal to significantly reduce NTD funding, but also including: