Poll: Nearly Half of the Public Say They or a Family Member Skipped or Delayed Care Due to Coronavirus, But Most Plan to Get Care in the Coming Months

Most Say Their Physical Health has Not Been Affected, But Many Say Their Mental Health Is Worse

Nearly One in Four Expect a Family Member to Turn to Medicaid in the Coming Year, and Majorities across Party Lines Oppose Medicaid Cuts to Address State Budget Shortfalls

Amid the threat of coronavirus, nearly half (48%) of Americans say someone in their family has skipped or delayed getting some type of medical care due to the pandemic, the latest KFF Health Tracking Poll finds. This includes 11% who say the person’s condition worsened due to the missed care.

The findings come as many states move to relax some restrictions on businesses, including health care providers, aimed at limiting the spread of COVID-19, which has already caused about 100,000 deaths nationwide. 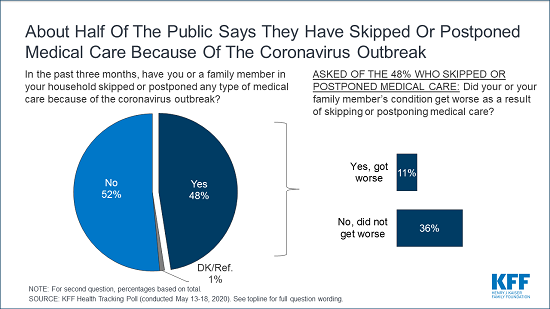 “Most of those who have put off care due to coronavirus expect to get it soon,” KFF President and CEO Drew Altman said. “If they do, health care utilization may bounce back more quickly than the rest of the economy.”

Most adults (86%) say their physical health has stayed about the same since the outbreak began, but the crisis continues to take a toll on people’s mental health. Four in 10 adults (39%) this month say worry and stress related to coronavirus has had a negative impact on their mental health. This includes one in eight (12%) who say it has had a “major” negative impact, a slight dip from six weeks ago (19%).

With unemployment rising and employer coverage at risk, nearly one in four (23%) adults who are not currently covered by Medicaid also say they or a family member likely will turn to the program in the next year. This includes about three in 10 (31%) of those who have lost a job or income recently due to coronavirus.

Three-quarters (74%) of the public say they would oppose state Medicaid cuts to address budget shortfalls spurred by the coronavirus pandemic and economic downturn, while a quarter (24%) say they would favor them. Most Democrats (85%), independents (73%), and Republicans (62%) say they oppose decreasing Medicaid spending.

Majorities across partisan identification also say they would oppose cuts to balance their state’s budget affecting public schools, police and public safety, and jails and prisons. Most across parties would support cuts to transportation spending, while partisans are split over cuts to higher education, social services and environmental protection with majorities of Democrats opposing all of these cuts.

Most states have expanded their Medicaid programs under the Affordable Care Act to cover low-income childless adults. In the 14 states that haven’t, two-thirds (66%) of residents say they favor their state expanding Medicaid to cover more low-income uninsured people, while one-third (32%) want to keep Medicaid as it is today.

The poll also examines the crisis’ economic impact on families. Overall about three in 10 (31%) people report at least some difficulties paying their bills or affording routine expenses because of coronavirus.

This includes about one in six who say they have fallen behind in paying credit card or other bills (18%), have had problems paying their utilities (17%), or fallen behind in paying their rent or mortgage (15%). About one in ten report problems paying for food (13%), paying medical bills (11%), affording health coverage (9%), or paying for prescription drugs (8%).

Among those living in households that experienced a job or income loss due to coronavirus (who make up one-third of all adults), about half (49%) report at least one of those difficulties paying household expenses.

In addition, one in four (26%) Americans also say they or someone in their household has skipped meals or relied on charity or government programs to get enough to eat. Most of those skipping meals or relying on assistance attribute their need to the coronavirus pandemic and its impact on their financial situation (59%, or 16% of the overall public). A smaller share (39%, or 10% of the overall public) say they were already experiencing problems affording food before the outbreak.

Those most likely to struggle with getting enough food specifically because of coronavirus include those in families who have lost a job or income (30%), as well as Blacks (30%) and Hispanics (26%).

Views of Medicare-for-all, a Public Option, and the ACA Largely Unchanged since Coronavirus

While the COVID-19 crisis has renewed attention on health coverage and cost issues, it has had little impact on the public’s views toward two main Democratic approaches to expanding coverage debated during the 2020 primary season – Medicare-for-all, championed by Sen. Bernie Sanders, and a voluntary “public option” plan, promoted by former Vice President Joe Biden.

While majorities of the public support both approaches, more people continue to say they favor a public option (68%) than say they favor Medicare-for-all (56%) – the same shares that favored each proposal in January before coronavirus became a major concern in the U.S.

Designed and analyzed by public opinion researchers at KFF, the poll was conducted May 13-18 among a nationally representative random digit dial telephone sample of 1,189 adults. Interviews were conducted in English and Spanish by landline (283) and cell phone (906). The margin of sampling error is plus or minus 3 percentage points for the full sample. For results based on subgroups, the margin of sampling error may be higher.

Filling the need for trusted information on national health issues, KFF (Kaiser Family Foundation) is a nonprofit organization based in San Francisco, California.