As People Lose Jobs Due to the Coronavirus Crisis and Enroll in Medicaid, Survey Finds States Anticipate Medicaid Budget Shortfalls

Many states that shared budget projections in response to a new KFF survey of state Medicaid officials report that they expect to see Medicaid budget shortfalls due to rising Medicaid spending and enrollment as people lose jobs amid the coronavirus pandemic and more people enroll in the government health insurance program for low-income people.

KFF conducted the rapid survey of Medicaid directors in all 50 states and the District of Columbia with Health Management Associates (HMA), drawing responses from 38 states. Some states were still in the process of gathering data to understand the implications of the coronavirus at the time of the survey, and did not have updated enrollment and/or spending projections yet for FY 2020 and/or FY 2021.

The survey findings come at a time when Congress is considering an additional increase in the federal match rate available to states for Medicaid. Without additional federal support, state budgets for the forthcoming fiscal year – which begins July 1 for most states – will likely include significant spending cuts, including for Medicaid, at a time when demand for services is growing, the survey suggests. 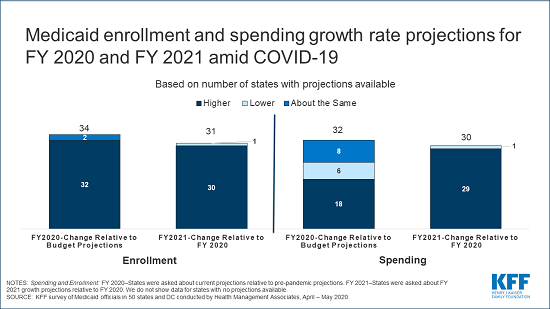 As a result of the accelerating enrollment and spending, 17 of 19 states that had budget projections reported that a budget shortfall was “nearly certain” or “likely” for the upcoming state fiscal year.  Because Medicaid is financed with a combination of federal and state funds, states would need to make substantial cuts to Medicaid to generate significant state budget savings.

Medicaid is a countercyclical program. During economic downturns more people enroll, increasing program spending at the same time that state tax revenues may be falling. The Families First Coronavirus Response Act (FFCRA) authorized a 6.2 percentage point increase in the federal match rate (“FMAP”) to provide support to state Medicaid programs and fiscal relief for states if states comply with certain maintenance of eligibility requirements that would ensure continuous coverage for current enrollees.

Even with the additional help, state budgets are expected to be severely strained in the coming fiscal year, the survey shows.  Legislation introduced on May 12 in the House would increase the FMAP by 14 percentage points from July 1, 2020 through June 30, 2021. But the future of the legislation, and prospects for additional federal support for states and Medicaid more generally, remain uncertain.

For the full report, as well as other data and analyses regarding Medicaid and COVID-19, visit kff.org.