As the second round of open enrollment approaches, policy makers, journalists, insurers and enrollment groups may want to keep in mind what health insurance shoppers told us about their experiences during the first open enrollment period. This data note examines selected findings from two Kaiser Family Foundation surveys that shed light on how people navigated the new options and choices available under the ACA during last fall’s open enrollment, with the hope of helping to inform our understanding of individuals needs during this second open enrollment period.

Following the Nov. 4 midterm elections, nearly half of Americans expect increased debate between the two parties over the Affordable Care Act. In comparison, 42 percent say the amount of debate will not change, and very few (5%) say it will decrease. Conducted just prior to the start of the ACA’s second open enrollment season, the poll also probes the views of people without health insurance, one of the key target groups for outreach and enrollment efforts. It finds the uninsured remain largely unaware of the renewed opportunity to purchase or enroll in health insurance through the marketplaces over the next few months.

Other than the big stories of Ferguson, Ebola and ISIS, the only other news which captured a majority of the public’s attention this month was President Obama’s executive order on immigration. Smaller, yet substantial, shares report closely following many health policy news stories this month. Over four in ten say they closely followed the lawsuit filed by House Republicans against President Obama over the implementation of the health care law and about a third say they followed a change in the official estimate for the number of people that enrolled in health insurance during the ACA’s first open enrollment period and the ACA’s second open enrollment period. The least closely followed health policy story of those asked about this month, was coverage of comments about the ACA made by MIT health economist, Jonathan Gruber

The Federal Courts’ Role in Implementing the Affordable Care Act

This issue brief examines the federal courts’ role to date in interpreting and affecting implementation of the Affordable Care Act (ACA), with a focus on the provisions that seek to expand access to affordable coverage. 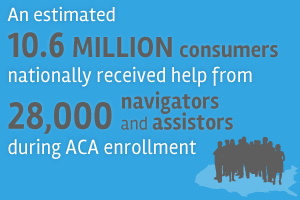 This survey by the Kaiser Family Foundation of Navigators and other Marketplace consumer assistance programs under the Affordable Care Act (Obamacare) offers a nationwide analysis of the number and distribution of assisters and people they helped. The report examines the experience of programs in conducting outreach and enrollment assistance during the first open enrollment period. It also reviews the nature of help consumers needed applying for Medicaid or premium tax credits and understanding health insurance choices, and discusses key factors that impacted the effectiveness of Marketplace Assister Programs.