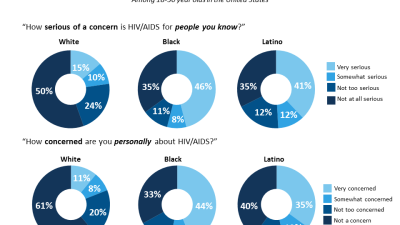 Georgia has the fifth highest number of HIV/AIDS diagnoses in the country. While the impact is felt across the state, three counties in Atlanta – Fulton, DeKalb and Clayton – have the highest prevalence rates (per 100,000 people) in the state. As is the case nationally, Black residents have been most severely and disproportionately affected, accounting for two thirds (67%) of new diagnoses in Georgia in 2013.
To better understand the views and experiences of Georgians on HIV/AIDS, the Kaiser Family Foundation conducted a representative survey of 556 adults residing in Georgia in the summer of 2015. The survey was conducted as part of a public information partnership with the Georgia Department of Public Health.