Alicia Keys in Washington, D.C., with Kaiser Family Foundation To Introduce Empowered Campaign To Reach Women in the U.S. About HIV/AIDS

Fourteen-time Grammy Award-winning artist and HIV advocate Alicia Keys took part in a briefing at the Kaiser Family Foundation’s Washington, D.C. offices on Monday morning to introduce EMPOWERED, a new campaign to reach women in the U.S. about HIV — developed in partnership with the Foundation as part of the Greater Than AIDS initiative. Ms. Keys leads the campaign and is featured in conversations with women living with HIV.

Of the more than 1.1 million people living with HIV in the U.S. today, one in four is a woman. Black women have been disproportionately affected, accounting for majority of new infections among women.

Ms. Keys, who has dedicated her advocacy work to the urgency of HIV/AIDS and has long spoken of the power of women said: “Women and girls have been affected by HIV since the start, but that impact has not been recognized. And as the sisters, mothers, daughters, and caregivers, we are the backbones of families, communities and entire societies. We will never see an AIDS-free generation without harnessing the power and strength of women.” 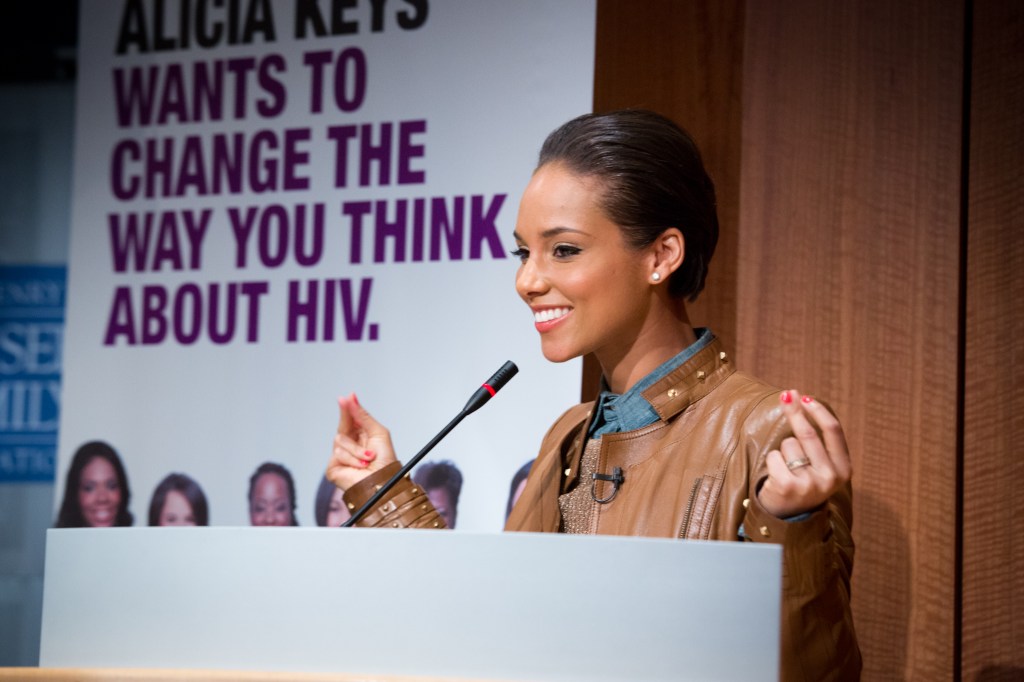 The cross-platform campaign includes: TV, radio, outdoor, print and digital public service ads; special programming and editorial content; social media promotions and informational resources. In an effort to increase public dialog about HIV/AIDS, a half-hour video of Ms. Keys in conversation with women living with HIV is available for community screenings and discussion.

The Foundation released a new report on Women & HIV/AIDS in the U.S. that puts a spotlight on the epidemic today — in particular the crisis facing Black women. Despite recent encouraging trends showing a decrease in new infections among women in the U.S. — the most significant in two decades — HIV/AIDS continues to severely and disproportionately affect women of color who account for the majority of new infections among women. One in 32 Black women today is estimated to contract HIV in her life time. Just 26 percent of women who are HIV positive are in treatment and have the virus suppressed with ongoing antiretroviral therapy.

“Focusing our efforts on communities and populations where there is greatest need is the key to making greater progress on HIV,” said Drew E. Altman, President and CEO of the Foundation, adding that “EMPOWERED does that by focusing on women and HIV and the broader role women play in the response to the epidemic.”

Also as part of the EMPOWERED campaign, Alicia Keys announced her new community grants program to help advance community-level efforts focused on women and HIV/AIDS. The grants program will be administered by AIDS United with assistance from the Kaiser Family Foundation. Grants will be awarded via a competitive process steered by an advisory council comprised of leaders in the HIV field – representing the community, academia, and the private sector.

“We are taking action to help our most vulnerable populations of women protect themselves — and those they love — from continuing the spread of the virus and helping to create an AIDS-free generation in America,” said Dr. Vignetta Charles, Senior Vice President at AIDS United, a national organization supporting more than 400 local AIDS organizations.

On hand at Monday’s announcement to discuss the impact of HIV on women in the U.S. was White House Senior Advisor Valerie Jarrett — who chairs the President’s Council on Women and Girls and lost her sister-in-law to AIDS. Commenting on the progress of the President’s National HIV/AIDS Strategy, Ms. Jarrett said: “The role of this strategy is to prevent as many infections and save as many lives as possible, including reducing health disparities, improving health and wellness for everyone living with HIV.”

Congresswoman Barbara Lee (D-CA13), co-founding chair of the Congressional Caucus on HIV/AIDS, outlined policy priorities she sees facing the Congress in combatting HIV/AIDS, “Congress has an important role to play in creating and supporting legislation to empower women and to achieve an AIDS-free generation.”

The campaign spotlights conversation between Ms Keys and five HIV positive women from different parts of the country and walks of life. Among them are: Cristina, a graduate student from the San Francisco Bay Area who was born with HIV; Eva, a home health care worker living in Atlanta with her family; Kym, a young professional living in Texas who learned she was positive after her new husband became sick and died as a result of HIV; Jen, a wife and mother in the Pacific Northwest who has being living with HIV for over 20 years; and Stephanie, a recent college graduate from North Carolina who appeared in an MTV special on youth and HIV. They share their stories in the hopes of reaching other women and showing how, whether positive or negative, we are all empowered in this fight.

Tina Hoff, Senior Vice President and Director of the Health Communication and Media Partnerships program at the Foundation, commented: “Media campaigns, like EMPOWERED, play an important role as part of the public health response to HIV/AIDS by getting out information, connecting people in need with resources, keeping attention on the issue, and perhaps most significantly helping to confront the stigma that still surrounds the disease.”

An archived webcast from the event is available on the Kaiser Family Foundation website. For more information on EMPOWERED campaign, visit www.greaterthan.org/empowered. 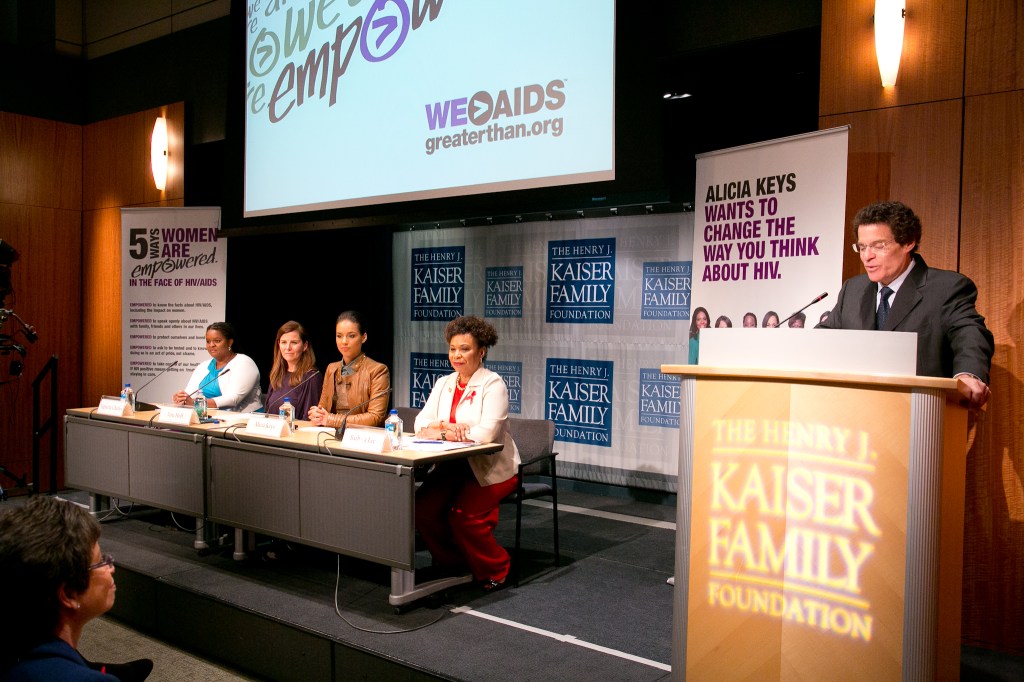 About the Kaiser Family Foundation The Kaiser Family Foundation, a leader in health policy analysis, health journalism and communication, is dedicated to filling the need for trusted, independent information on the major health issues facing our nation and its people. The Foundation is a non-profit private operating foundation, based in Menlo Park, California. About Alicia Keys Alicia Keys is a 14 time Grammy Award®-winning singer/songwriter/producer, actress, New York Times best-selling author, entrepreneur and humanitarian. Since releasing her debut album, songs in A minor, Keys has built an unparalleled repertoire of hits with over 30 million albums sold worldwide. As an HIV advocate, Keys co-founded Keep a Child Alive (KCA) which provides AIDS treatment, support, nutrition and love to children and families affected by HIV/AIDS in Africa and India. About Greater Than AIDS Greater Than AIDS is a leading national public information response focused on the U.S. domestic epidemic. Launched in 2009 by the Kaiser Family Foundation and Black AIDS Institute, it is supported by a broad coalition of public and private sector partners, including: major media and other business leaders; Federal, state and local health agencies and departments; national leadership groups; AIDS service and other community organizations; and foundations, among others. Through targeted media messages and community outreach, Greater Than AIDS works to increase knowledge, reduce stigma and promote actions to stem the spread of the disease. While national in scope, Greater Than AIDS focuses on communities most affected. About AIDS United The mission of AIDS United is to end the AIDS epidemic in the United States, through national, regional and local policy/advocacy, strategic grantmaking, and organizational capacity building. With partners throughout the country, AIDS United works to ensure that people living with and affected by HIV/AIDS have access to the prevention and care services they need and deserve.