The Alliance for Health Reform and the Kaiser Family Foundation present a briefing to discuss the complexities of raising the age for Medicare eligibility. Speakers address questions on how this proposed change may affect beneficiaries, employers, and the workforce, as well as the cost and coverage implications for those approaching…

Performing Under Pressure: Annual Findings of a 50-State Survey of Eligibility, Enrollment, Renewal, and Cost-Sharing Policies in Medicaid and CHIP, 2011-2012

The annual 50-state survey of Medicaid and CHIP eligibility rules, enrollment and renewal procedures and cost-sharing practices, conducted by the Kaiser Commission on Medicaid and the Uninsured with the Georgetown University Center for Children and Families, found that, despite continued fiscal pressures on states, eligibility policies remained stable in nearly…

The Health Reform Law’s Medicaid Expansion: A Guide to the Supreme Court Arguments

One significant element of the pending U.S. Supreme Court case challenging the Affordable Care Act is the constitutionality of the law’s Medicaid expansion. This provision of the law requires states that choose to participate in the Medicaid program to cover nearly all adults under age 65 with household incomes at… 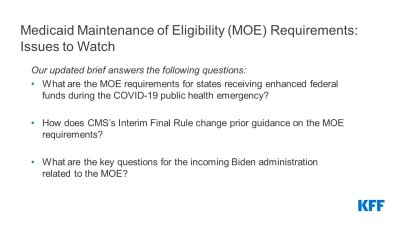 Federal legislation provides a temporary increase in federal Medicaid matching rates to states conditioned on states providing continuous eligibility for existing enrollees and meeting certain other eligibility requirements. This brief provides an overview of these maintenance of eligibility (MOE) requirements, examines what happens when the MOE expires, and discusses key issues to consider looking ahead.