Given that additional expenses can strain the budgets of low-income individuals and families, federal rules in Medicaid and CHIP set limits on the amounts that states can charge for premiums and cost-sharing, including copayments, coinsurance, and deductibles (see Box 1). In light of this, premiums and cost-sharing generally remain low in Medicaid and CHIP as of January 1, 2016, with few changes in 2015. However, under Section 1115 waiver authority, several states have implemented monthly contributions or premiums for adults that would not otherwise be allowed under federal rules.

Premiums and Cost-Sharing For Children

As of January 2016, 30 states charge premiums or enrollment fees for children in Medicaid or CHIP. Reflecting the ACA eligibility protections for children that extend through 2019, this count remained steady during 2015 as did most premium amounts. Under the ACA protections, states generally cannot increase premium amounts. One exception to this protection is if a state had a routine premium adjustment approved in its state Medicaid or CHIP plan prior to the enactment of the ACA on March 23, 2010. During 2015, two states (Maryland and Pennsylvania) increased premiums under such routine annual adjustments. Other changes included Michigan joining the three other states (California, Maryland and Vermont) that charge monthly premiums to children in Medicaid when it shifted all children from its separate CHIP program to Medicaid. Premiums and enrollment fees are more prevalent in CHIP than Medicaid due to the relatively higher incomes of families with children covered under CHIP and the program’s more flexible premium rules. 1 Overall, 26 states charge monthly or quarterly premiums and 4 charge annual enrollment fees for children in Medicaid or CHIP. In the 26 states charging monthly or quarterly premiums, charges begin for families above 150% FPL in 19 states, including 8 states in which charges begin above 200% FPL. Median monthly premium amounts range from $17 at 151% FPL to $102 at 351% FPL, although only two states extend eligibility up to this level (Figure 20). 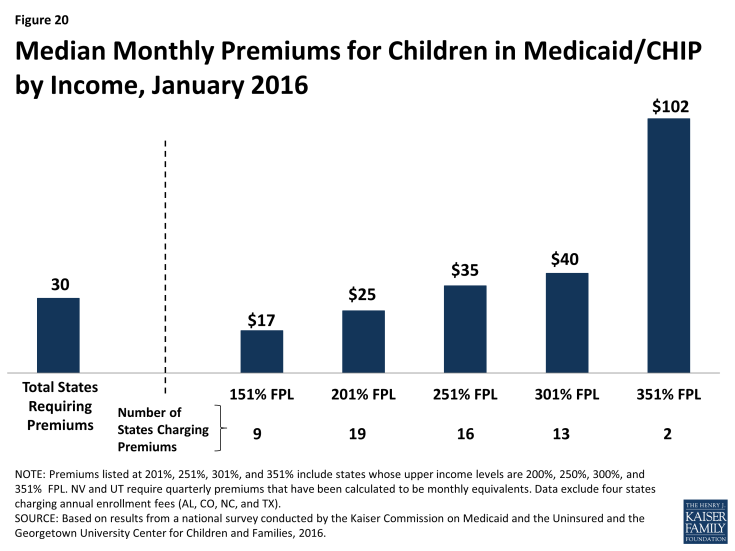 States vary in their policies for nonpayment of premiums. States must provide a minimum 60-day grace period in Medicaid before cancelling coverage for nonpayment of premiums and cannot require enrollees to repay outstanding premiums as a condition of reenrollment, nor can they delay reenrollment. In contrast, CHIP programs are required to provide only a minimum 30-day grace period and may impose up to a 90-day lockout period during which time a child is not allowed to reenroll. Among the 22 states that charge monthly or quarterly premiums or enrollment fees in CHIP, only 4 states limit the grace period to the minimum 30 days, while 17 states provide a 60-day or longer grace period. With the addition of New Jersey in 2015, 14 CHIP programs have a lock-out period after a child is disenrolled for nonpayment of premiums, which range from 1 month to the maximum 90 days. Sixteen states that charge monthly or quarterly payments in Medicaid or CHIP require children who have been disenrolled due to nonpayment of premiums to reapply for coverage. However, seven states reinstate coverage retroactively if outstanding premiums are repaid. 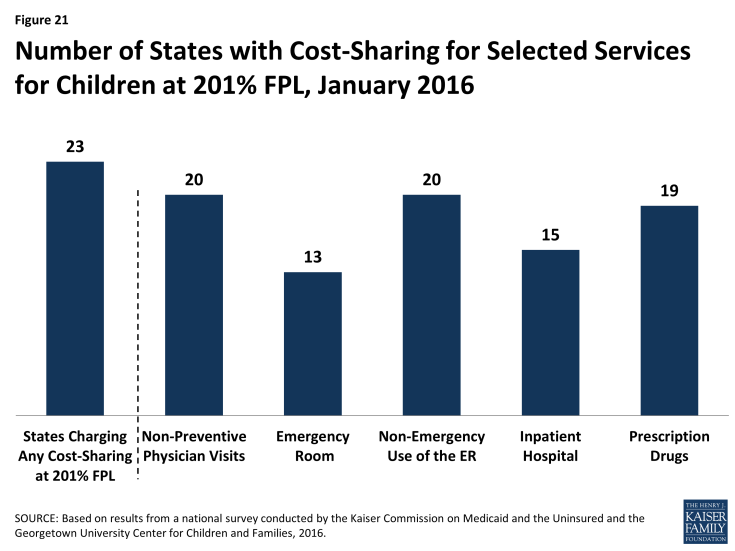 Figure 21: Number of States with Cost-Sharing for Selected Services for Children at 201% FPL, January 2016

Premiums and Cost-Sharing for Parents and Other Adults

As of January 2016, states generally do not charge premiums for low-income parents in Medicaid, but many do have cost-sharing for these parents. Because most parents covered through the Section 1931 eligibility pathway that existed pre-ACA have incomes below poverty, states generally do not charge them monthly premiums. However, during 2015, Indiana implemented monthly contributions for Section 1931 parents under waiver authority, although enrollees cannot be disenrolled due to nonpayment. Forty states charge nominal cost-sharing for Section 1931 parents in Medicaid which varies by service. As of January 2016, 26 states charge parents cost-sharing for a physician visit, 22 charge for non-emergency use of the emergency room, 28 charge for an inpatient hospital visit, and 39 charge for prescription drugs, which may be limited to brand name drugs in some cases (Figure 22). Indiana is the only state to obtain Section 1916(f) waiver authority to charge parents higher cost-sharing than otherwise allowed, which applies to non-emergency use of the emergency room. Cost-sharing for parents remained stable in 2015 with a few exceptions: Florida and Oklahoma increased and Montana decreased cost-sharing for some services, and New York raised the income level at which cost-sharing begins from 0% to 100% FPL. 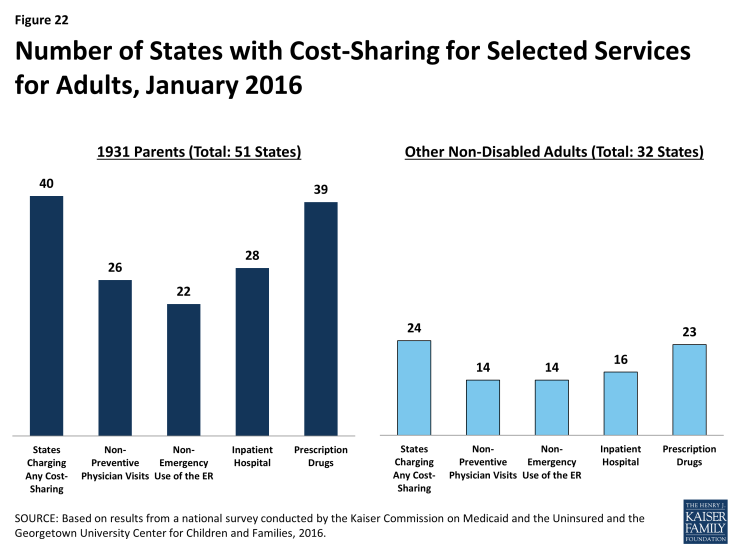 Figure 22: Number of States with Cost-Sharing for Selected Services for Adults, January 2016

As of January 2016, 23 of the 31 states that have expanded Medicaid charge expansion adults cost-sharing. In addition, Wisconsin charges the adults it covers up to 100% FPL cost-sharing. Most states have aligned cost-sharing policies for adults and Section 1931 parents, although there are differences in some states. Cost-sharing amounts are generally nominal reflecting the low incomes of adults. Overall, 14 states charge cost-sharing for a physician visit, 14 charge for non-emergency use of the emergency room, 16 charge for an inpatient hospital visit, and 23 charge for prescription drugs as of January 2016. There were few changes in cost-sharing in the past year. These changes included some increases in copayments in New Hampshire and New York raising the income at which cost-sharing begins from 0% to 100% FPL.