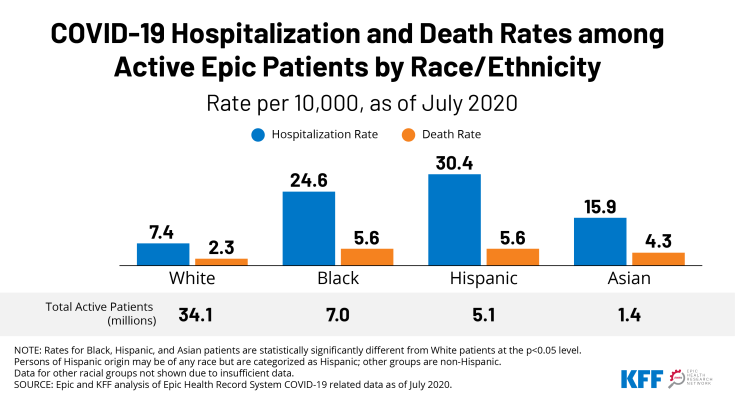 Among patients who tested positive for COVID-19, Black, Hispanic, and Asian patients remained at higher risk for hospitalization and death compared to White patients with similar sociodemographic characteristics and underlying health conditions. The higher hospitalization and death rates among patients of color, in part, reflect higher infection rates and higher rates of underlying health conditions as well as social and economic inequities and barriers to care. However, disparities persisted after controlling for COVID-19 infection, certain sociodemographic factors, and underlying health conditions, showing that differences in these underlying factors do not fully explain the disparities in hospitalization and death. This finding suggests that other factors, including racism and discrimination, are negatively affecting their health outcomes through additional avenues.

The analysis is based on Epic Health Research Network (EHRN) and KFF analysis of data for roughly 50 million patients in the Epic health record system who have interacted with the health system in the past two years and have known race and ethnicity. Findings are presented for Black, Hispanic, Asian, and White patients. Due to data limitations, we do not present findings for smaller population groups, including AIAN and NHOPI patients, or people who report multiple races.