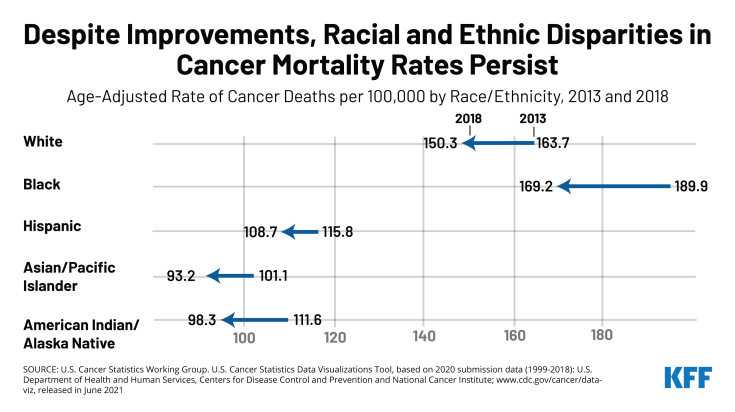 Overall cancer mortality rates have decreased for all racial and ethnic groups, with the largest decrease among Black people.

However, Black people continued to have the highest risk of cancer death (169 per 100,000 people), even as the difference in cancer mortality rates for Black and White people narrowed and White people had the highest rate of new cancers. This increased mortality risk among Black people partly reflects a later stage of disease at diagnosis, although Black patients additionally have lower stage-specific survival for most cancer types. Overall cancer mortality rates were lower for Hispanic, American Indian and Alaska Native, and Asian and Pacific Islander people.

Equity in cancer diagnostics, therapeutics, and clinical trials is one of the goals in a relaunched “Cancer Moonshot” announced by the Biden administration, which aims to reduce the age-adjusted cancer death rate by at least half in the next 25 years. While noting a sharp drop in cancer screenings during the COVID-19 pandemic, the President’s Cancer Panel this week also made recommendations on increasing equitable access to cancer screening.

Our new brief has more on racial disparities in cancer outcomes, screening, and treatment. You can watch our Feb. 3 panel discussion on equity in cancer care here.