Private Insurers Are Expected to Pay $2.1 Billion in Rebates to Consumers This Year for Excessive Health Insurance Premiums Relative to Health Care Expenses

Private insurance companies are expecting to pay out $2.1 billion in rebates to consumers this fall, the second highest amount ever issued under the Affordable Care Act, according to a new KFF analysis.

The rebates, which are calculated based on the share of premium revenues that insurance companies paid out for health care expenses and quality improvement, are roughly $400 million lower than last year’s record high of $2.5 billion, but more than 50 percent higher than the $1.4 billion insurers sent back to policy holders in 2019.

Rebate amounts will vary by market. Individual market insurers account for the majority of the payments, with expected rebates of at least $1.5 billion, finds the analysis of data reported by insurers to the Centers for Medicare and Medicaid Services. Rebates in the small and large group insurance markets are expected to be $308 million and $310 million, respectively. The amounts are preliminary estimates, with final rebate data coming later this year. 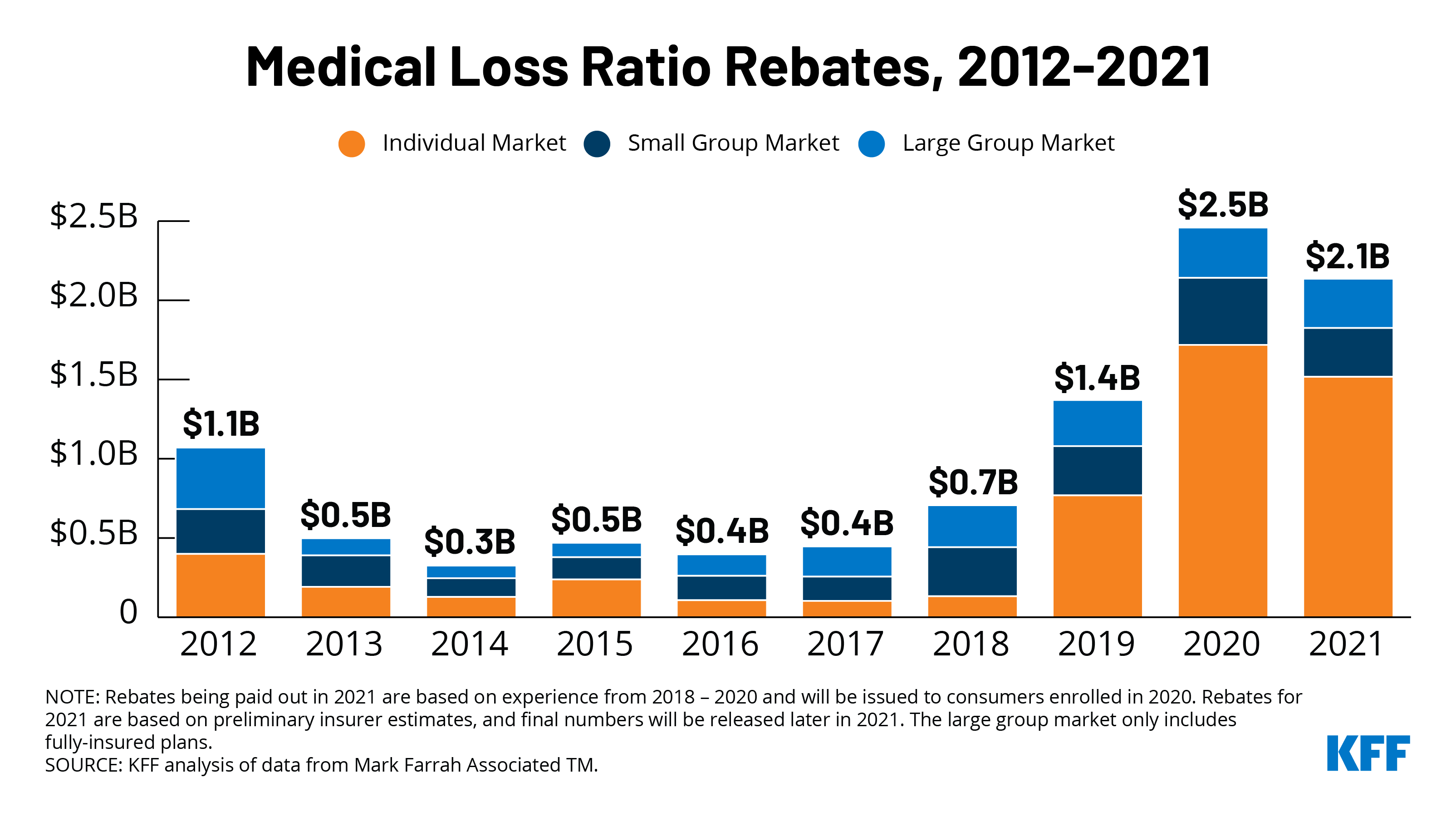 The rebates are the result of insurance companies not meeting the ACA’s medical loss ratio threshold, which requires insurers to spend at least 80 percent of premium revenues (85% for large group plans) on health care claims or quality improvement activities. Most people in large group plans are in self-insured plans, which the MLR threshold rule does not apply to.

Not all policy holders are due rebates, but among those who are, this year’s rebates work out to roughly $299 per plan member in the individual market, $127 per member in the small group market and $95 per member in the large group market, according to KFF’s analysis. By law, insurance companies must begin issuing the latest rebates to eligible consumers later this fall.

One reason some companies failed to meet the threshold in 2020 is that the pandemic drove health spending and utilization down, as providers cancelled elective procedures and consumers opted to forego routine care out of fear of being infected. As a result, insurers generated higher levels of profits than they had anticipated when they set their 2020 premiums well before the pandemic emerged. Overall rebates would have been even higher had some insurers not taken steps to increase their claims costs relative to their premium income, including offering premium holidays and waiving certain out-of-pocket costs for enrollees, such as costs for telemedicine and for treatment for COVID-19. Claims costs also began to rise toward the end of the year during the winter surge in COVID-19 cases.

Rebates are calculated using a three-year average so the large rebates are not just a side effect of the pandemic. In the individual market, this year’s rebates are driven in large part by significant insurer profits in 2018 and 2019 (as rebates issued in 2021 are based on insurer financial performance in 2018, 2019, and 2020).

For more data and analyses about the pandemic, insurers’ financial performance and the ACA, visit kff.org.