A new KFF analysis finds that overall enrollment in the individual market fell 5% to 13.7 million in the first quarter of 2019 following the repeal of the Affordable Care Act’s individual mandate penalty.

The analysis provides an early look at how the market is working following recent policy changes that some argued would spark dramatic upheaval among consumers who buy their own health insurance either through the Affordable Care Act’s marketplaces or through off-exchange plans.

The decline of about 651,000 customers stems entirely in the off-exchange market, where purchasers are ineligible for tax credits and must pay the full cost of insurance themselves. Enrollment in marketplace plans held steady at 10.6 million during the first quarter of this year, including 9.3 million low- and moderate-income enrollees who receive tax credits to help cover their plan’s premiums. 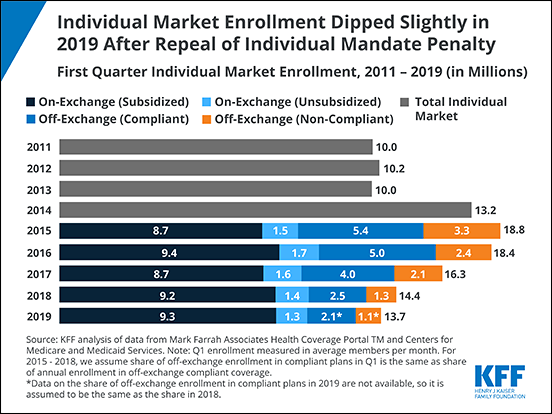 The year-to-year overall decline is far smaller than the previous two years (a drop of 2.1 million or 11% in 2018 and 1.9 million or 12% in 2017) when premium increases rose more rapidly than they did in 2019 and become less affordable to middle-income consumers ineligible for tax credits. While affordability remains an issue for that group, the analysis suggests that the size of the individual market could be relatively stable overall if premium increases remain modest and tax credits continue.