Americans who feel lonely or socially isolated often report negative impacts on their mental (58%) and physical (55%) health, their personal relationships (49%) and ability to do their job (33%). Some also say it has led them to think about harming themselves (31%) or committing a violent act (15%). 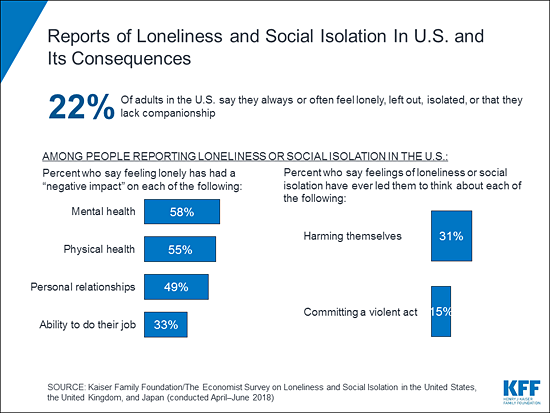 The survey also finds that while most Americans (58%) view the increased use of technology as a major reason why people feel lonely and socially isolated, those who report feeling lonely or socially isolated are divided on the impact of social media in particular. About as many say using social media such as Facebook, Snapchat and Twitter has made their feelings of loneliness better (31%) and worse (27%).

The survey takes a comprehensive look at the prevalence, causes and consequences of loneliness and social isolation in the United States, the United Kingdom and Japan at a time when aging societies and increasing use of technology is generating concerns about the effects of loneliness on health. Findings appear in The Economist’s Sept. 1 issue and in a separate KFF report that looks at people’s views and experiences with loneliness across the three countries.

Reports of always or often feeling lonely or socially isolated are similar in the U.S. (22%) and U.K. (23%), compared to 9 percent in Japan.

The three-country survey is part of a polling partnership between KFF and The Economist. The poll was designed and analyzed by survey researchers at KFF in collaboration with The Economist. Each organization is solely responsible for the content it publishes based on the survey.

The poll was conducted by telephone from April through June 2018 among random digit dial telephone (landline and cell phone) samples of adults in the U.S. (1,003), the U.K. (1,002) and Japan (1,000), including at least 200 adults in each country who report always or often feeling lonely or socially isolated.