Democratic presidential nominee Joe Biden holds a slight lead over President Trump in Arizona (45% to 40%), while the two candidates are within the margin of sampling error in Florida (Biden 43%, Trump 42%) and North Carolina (Biden 45%, Trump 43%), finds new KFF/Cook Political Report polls of voters in three critical Sun Belt states carried by President Trump in his 2016 victory. 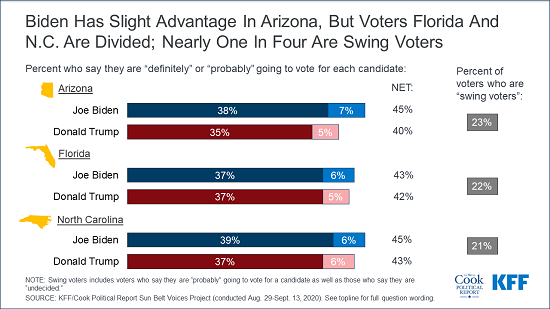 With the presidential election less than two months away, the new polls highlight one common factor about the race in each state: It’s largely about President Trump.

The new partnership survey of more than 3,400 voters across the three states, including at least 1,000 in each state, provides a glimpse into the concerns motivating voters in these key battlegrounds. Additional findings probing voters’ views about the economy, coronavirus, health care and other topics in the three Sun Belt states will be released soon.

The project explores the views of the critical group of nearly 1 in 4 voters in each state who are not certain who they will vote for. These “swing” voters include those who say they probably will vote for one of the candidates but are not completely certain as well as those who are truly undecided. This group is large enough in each state, especially since the races are so close, to determine the outcome, and the poll explores the factors that may influence both whether they vote and who they decide to vote for.

Across the three states, swing voters are more likely to identify as moderate (61%) and independents (43%) than voters who have already made up their mind. They are also somewhat younger on average than decided voters, and more likely to be Hispanic (22%, compared to 13% of decided voters).

Swing voters are more likely to say they prefer Joe Biden’s leadership style (50%) to President Trump’s style (39%) across the three states. At the same time, half (46%) describe President Trump as a strong leader, while four in 10 (39%) say the same about Joe Biden. 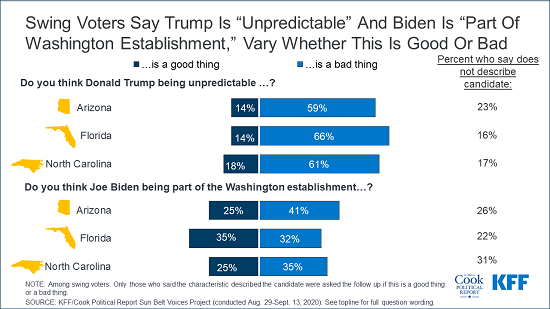 Swing voters are also somewhat more likely to say they approve of Joe Biden (56%) than of President Trump (45%), with the largest gap in Florida (Biden 60% approve, Trump 45% approve).

The Economy and Coronavirus Top Voters’ Issues Across the States, But Partisans Differ

To the extent specific issues will matter in the presidential race, voters rank the economy as the top issue across the three states (32% say it is their most important issue), followed by criminal justice and policing (17%) and the coronavirus outbreak (16%).

Partisans prioritize the issues differently, with half (52%) of Republicans naming the economy as their most important issue, with criminal justice and policing a distant second (22%). Democrats rank coronavirus, a public health issue, as their most important issue (28%), followed by race relations (23%) and health care generally (18%). Independent ranks the economy first (31%), followed by coronavirus (17%) and criminal justice and policing (15%).

Among swing voters, the economy is the top issue in each of the three states, followed by criminal justice and policing, and health care. The coronavirus outbreak is further down their list of concerns. 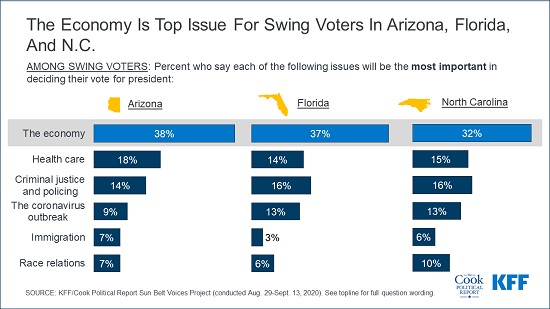 On most issues, including the coronavirus, race relations, and health care, voters in the three states trust Joe Biden more than President Trump. On the economy, which is voters’ top issue, more trust President Trump (54%) than Joe Biden (44%). Voters trust the two candidates equally on criminal justice and policing, and immigration.

Designed and analyzed by public opinion researchers at KFF in collaboration with Cook Political Report, the poll was conducted between Aug. 29 and Sept. 13, among a representative random sample of 3,479 registered voters in three Sun Belt states (1,298 in Arizona, 1,009 in Florida, and 1,172 in North Carolina). The poll relies on an innovative probability-based methodology designed to address shortcomings with telephone-only surveys based on either voter-registration rolls or random-digit dialing. Voters were contacted via mailing address using registration-based sampling and encouraged to participate in the survey either online or by telephone and follow-up contacts were made using outbound telephone calls. The margin of sampling error is plus or minus 4 percentage points in Florida and 3 percentage points in Arizona and North Carolina. For results based on subgroups, the margin of sampling error may be higher.