January 2016 marks the end of the second full year of implementation of the Affordable Care Act’s (ACA) key coverage provisions. This 14th annual 50-state survey of Medicaid and CHIP eligibility, enrollment, renewal, and cost-sharing policies provides a point-in-time snapshot of policies as of January 2016 and identifies changes in policies that occurred during 2015. Coverage is driven by two key elements—eligibility levels determine who may qualify for coverage, and enrollment and renewal processes influence the extent to which eligible individuals are enrolled and remain enrolled over time. This report provides a detailed overview of current state policies in these areas, which have undergone significant change as a result of the ACA.

Together, the findings show that, during 2015, states continued to implement the major technological upgrades and streamlined enrollment and renewal processes triggered by the ACA. These changes are helping to connect eligible individuals to Medicaid coverage more quickly and easily and to keep eligible people enrolled as well as contributing to increased administrative efficiencies. However, implementation varies across states, and lingering challenges remain. The findings illustrate that the program continues to be a central source of coverage for low-income children and pregnant women nationwide and show the growth in Medicaid’s role for low-income adults through the ACA Medicaid expansion.

Medicaid’s role for low-income adults continued to grow through the ACA Medicaid expansion. As of January 2016, 31 states have expanded Medicaid eligibility to parents and other non-disabled adults with incomes up to at least 138% FPL. This count reflects the adoption of the Medicaid expansion in three states—Alaska, Indiana, and Montana—during 2015. However, in the 20 states that have not expanded, median eligibility levels are 42% FPL for parents and 0% FPL for other adults, leaving many poor adults in a coverage gap since they earn too much to qualify for Medicaid but not enough for tax credit subsidies to purchase Marketplace coverage, which begin at 100% FPL. Aside from adoption of the Medicaid expansion in three states, there were few changes in eligibility for parents and other adults during 2015. Connecticut reduced eligibility for parents, but eligibility remains above the expansion limit and many of those who became ineligible likely qualify for subsidies to purchase Marketplace coverage. In addition, New York implemented a Basic Health Program (BHP) to offer more affordable coverage to adults with incomes up to 200% FPL, joining Minnesota as the second state with a BHP. 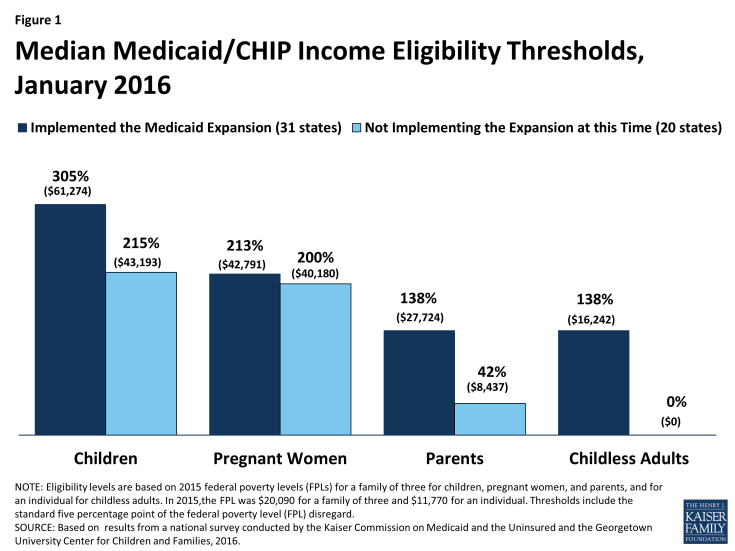 Regardless of whether states have implemented the ACA Medicaid expansion to adults, the law ushered in major changes to Medicaid systems and processes in all states. The changes are designed to harness technology to provide a modernized enrollment experience for consumers and may lead to increased administrative efficiencies for states. As documented in last year’s survey, many states faced significant challenges implementing new systems and processes when they were launched in 2014. These difficulties resulted in backlogs and delays in enrollments and renewals, which were a major focus during 2014. This year’s findings show that, in 2015, states resolved many of these challenges and built on successes to refine and enhance their upgraded systems. However, experiences vary across states and lingering challenges remain.

As of January 2016, individuals can apply for Medicaid online or by phone in nearly all states as envisioned by the ACA (Figure 2). All states, except Tennessee, have an online Medicaid application available either through the state Medicaid agency or an integrated portal that provides access to Medicaid and the State-Based Marketplace (SBM). Two states (Arkansas and Florida) began accepting telephone applications for Medicaid in 2015, bringing the total count of states doing so to 49 as of January 2016. 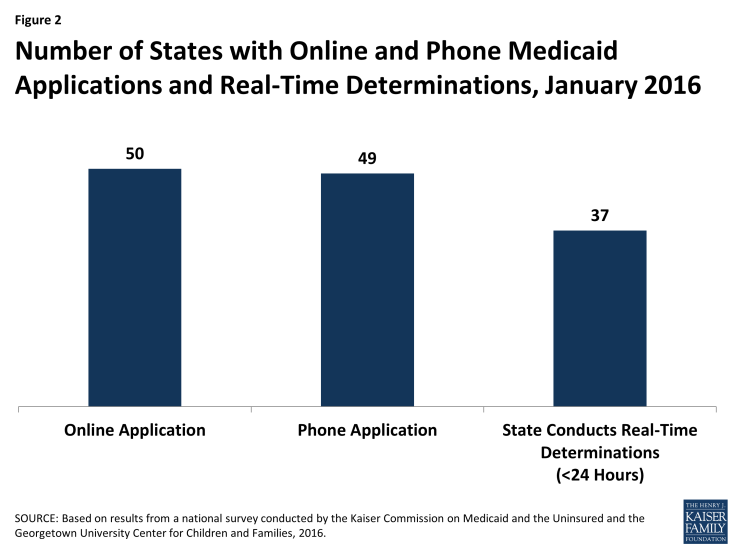 States expanded functionalities of online applications and accounts during 2015. Reflecting this work, all but one of the 50 online Medicaid applications allow applicants to start, stop, and return to the application, and 33 allow applicants to upload documents as of January 2016. In addition, 39 states allow consumers to create an online account to manage their Medicaid coverage. During 2015, a number of states expanded account functionalities, enabling consumers to report changes, view notices, upload documentation, renew coverage, and more.

Coordination between state Medicaid agencies and the Marketplaces improved during 2015, but challenges remain. Among the 17 states operating a SBM, 13 have a single integrated system that makes eligibility determinations for both Medicaid and Marketplace coverage, which eliminates the need for account transfers between programs. However, the 38 states that rely on the Federally Facilitated Marketplace (FFM), Healthcare.gov, for Marketplace eligibility and enrollment must electronically transfer accounts between Medicaid and the FFM to provide access to all insurance affordability programs. As of January 2016, all 38 states that rely on the FFM report they can receive electronic account transfers from the FFM, and 36 states report they can send electronic account transfers to the FFM. Twenty states report they are having problems or delays with transfers, although the scope of these problems varies across states. Although challenges remain, there has been marked improvement in coordination since the Marketplaces were launched in 2014, when states faced major technical difficulties with transfers that contributed to enrollment delays.

As implementation continues, a number of states eliminated delays in processing renewals and put streamlined renewal procedures in place as established by the ACA. When the ACA was first implemented, there was significant focus on implementing streamlined enrollment processes and establishing coordination between Medicaid and the new Marketplaces. As a result, most states delayed implementing new renewal procedures, and 36 states took up a temporary option to postpone renewals for existing Medicaid or CHIP enrollees during 2014. In 2015, most states caught up on renewals and many made gains in implementing streamlined renewal procedures. As of January 2016, 47 states are up to date in processing renewals for Medicaid (Figure 3). A total of 34 states report they can complete automatic or ex parte renewals by using information from electronic data sources, as outlined in the ACA. Among the 26 states that can report the share of renewals completed using automated processes, 10 indicate that over 50% of enrollees are automatically renewed, including 3 that report automatic renewal rates above 75%. In addition, 41 states can send pre-populated renewal forms, which states must use when they are unable to complete an automated renewal under ACA policies; 41 states offer telephone renewals as outlined by the ACA. 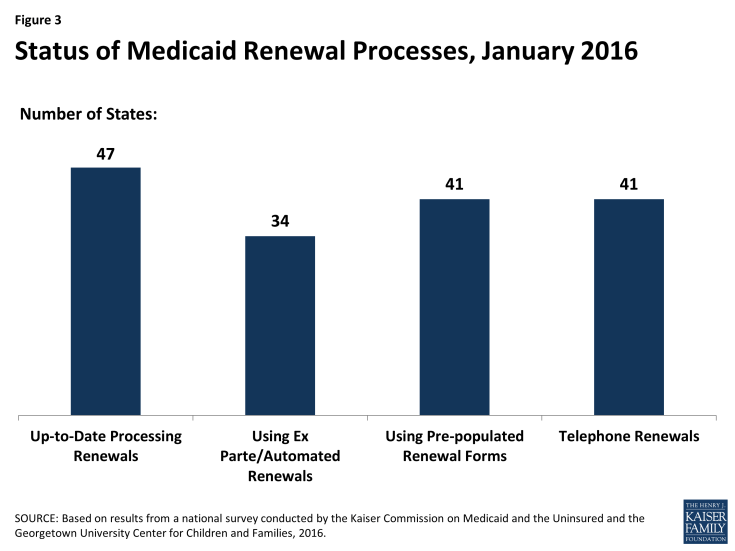 Premiums and cost-sharing in Medicaid and CHIP remain limited, although under waiver authority a few states are charging higher levels than otherwise allowed under federal law. The number of states charging premiums or enrollment fees (30 states) or copayments (26 states) for children remained the same during 2015. While most states charge nominal copayments for parents (40 states) and expansion adults (23 of 31 expansion states), states generally do not charge these groups premiums given that most of these individuals have incomes below poverty. However, as of January 2016, five states (Arkansas, Indiana, Iowa, Michigan, and Montana) charge adults monthly contributions or premiums under Section 1115 waiver authority. Indiana also received approval to charge parents monthly contributions and, under separate Section 1916 waiver authority, to charge parents and adults higher cost-sharing for non-emergency use of the emergency room than otherwise allowed under federal law.

States’ Medicaid and CHIP eligibility policies and enrollment and renewal processes will play a key role in reaching the remaining low-income uninsured population and keeping eligible individuals enrolled over time. Together, these survey findings show that:

Medicaid and CHIP continue to be central sources of coverage for the low-income population, but access to coverage varies widely across groups and states. Medicaid and CHIP offer a base of coverage to low-income children and pregnant women nationwide. Eligibility for adults has grown under the Medicaid expansion, but remains low in states that have not expanded. Overall, eligibility continues to vary significantly by group and across states, resulting in substantial differences in individuals’ access to coverage based on their eligibility group and where they live.

Upgraded state Medicaid systems help eligible individuals connect to and retain coverage over time, provide gains in administrative efficiencies, and offer new options to support program management. One key outcome of the ACA has been the significant modernization of states’ Medicaid eligibility and enrollment systems. These higher-functioning systems help eligible individuals connect to coverage more quickly and easily, keep individuals enrolled over time, reduce paperwork burdens, and lead to increased administrative efficiencies. Moreover, the modernized systems offer new options to support program management. For example, states may have increased data reporting capabilities and expanded options to connect Medicaid with other systems. Further, as systems and processes become more refined over time, states may be able to manage enrollment more efficiently, which may allow them to refocus resources on other activities.

There remain key questions about how recent changes in eligibility and enrollment may be affected by a range of factors moving forward. Funding for CHIP is set to expire in 2017, raising key questions about the future of the program and what might happen in its absence. In addition, the ACA maintenance of effort provisions for children’s coverage end in 2019. State Medicaid expansion decisions will likely continue to evolve over time, and it remains to be seen how they might be affected by the gradual reduction in federal funding for newly eligible expansion adults, which begins to phase down in 2017 when it reduces to 95%. Pending proposals in current budget reconciliation legislation would roll back the Medicaid expansion to adults and eliminate the maintenance of effort requirements in 2017. Outside of these potential changes, it also will be important to examine how the Section 1115 waivers that allow states to charge adults premiums and monthly contributions are affecting coverage and program administration, particularly given that waiver authority is provided for research and demonstration purposes.