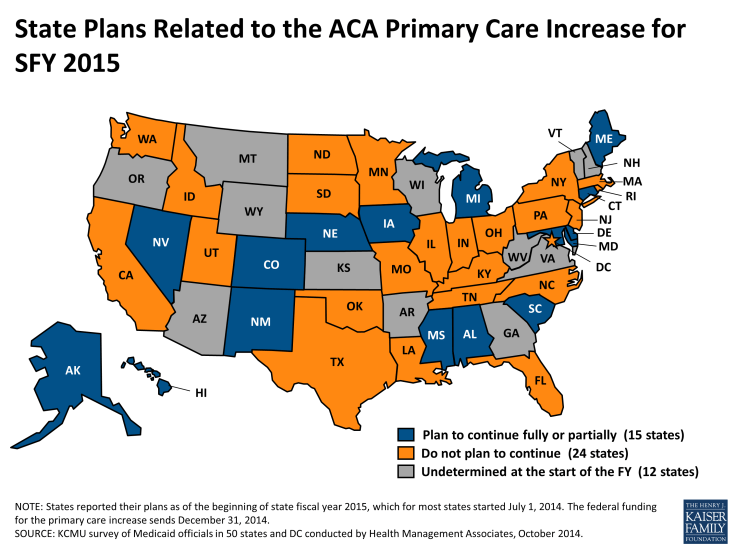 Plan to continue the increase. Fifteen states indicated that they will continue the primary care fee increase in 2015, at least in part. The 100% federal funding for rate increase ends on December 31, 2014, so these states will continue the increase at their regular federal matching rate. For states that were paying primary care physicians close to 100% of Medicare rates even before the ACA (such as Alaska, whose rates were 124% of Medicare rates), extending the ACA increase does not impose significant new costs. However, most states noted a sizable increase in state funds required to continue the primary care increase. In particular, six states (Colorado, Hawaii, Maryland, Maine, Michigan and Nevada) had primary care payment rates in fee-for-service that were at or below 75% of Medicare levels prior to the ACA primary care increase.1 Nine states (Alabama, Alaska, Connecticut, Delaware, Iowa, Mississippi, Nebraska, New Mexico and South Carolina) had fees that were at or above 76% of Medicare fee levels.2Some states also noted that they were changing the terms of the ACA primary care increase by adding or limiting the types of providers who would receive the increase. For example, Connecticut reported plans to apply the increase to Advanced Practice Registered Nurses (APRNs) in light of a change in the state’s scope-of-practice laws. South Carolina noted plans to limit the increase to specific primary care providers (e.g., general pediatricians, general internal medicine physicians, general family medicine physicians, general obstetricians, and general psychiatrists.) Other states noted plans to finance only part of the increase; for example, Michigan reported plans to fund half of the value of the increase. The survey only asked states about plans for SFY 2015, but some states did note that continuing the increase in future fiscal years was a likely topic of debate for the next legislative session.

Undetermined. Tweleve states indicated they had not yet made a decision on this policy and were still evaluating whether the enhanced rates had any impact on provider participation. Many of these states (along with some states that reported no plans to continue the increase) noted that they were waiting to see if any federal action would be taken to extend the 100% federal financing past December 31, 2014.6