As President Trump prepares to make a new Supreme Court nomination, new polling from the Kaiser Family Foundation finds that two-thirds (67%) of the public do not want the Supreme Court to overturn the 1973 landmark Roe v. Wade decision that established women’s constitutional right to abortion.

Fielded this month prior to Justice Anthony Kennedy’s retirement announcement, the poll finds about three in 10 Americans (29%) say they want the Supreme Court to overturn Roe v. Wade. The case is expected to be a major flashpoint in the Senate debate over Justice Kennedy’s replacement, as Justice Kennedy has been a swing vote on abortion on a court closely divided on the issue. 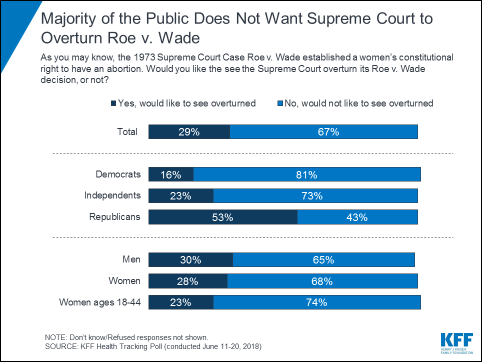 The public overall is split on how easily they think women can access abortion services in their communities today – with major differences in perceptions by party. About a quarter (27%) say it is “too easy” for women to get these services, while one in five (22%) say it is “too difficult” and about a third (35%) say it is “about right.” Half (51%) of Republicans say it is too easy, while nearly four in 10 (37%) Democrats say “too difficult.”

In light of the attention generated by the #MeToo movement and 2018 primary victories by female candidates, the poll looks ahead to November’s midterm elections and examines the public’s and voters’ views on a broad range of issues affecting women, including sexual harassment, paid parental leave and reproductive health.

While not at the top of voters’ concerns heading into the midterms, most voters (56%) do say it is at least “very important” for candidates to discuss issues that primarily affect women.

When this group is asked to say in their own words what issues they mean, about four in 10 (44%, or 25% of all voters) mention issues related to equal pay or fair employment. This is twice as many as those who mention reproductive health issues including abortion or contraception (20%, or 11% of all voters).

In addition, substantial shares of voters say that a candidate’s position on certain policies that mainly affect women will influence their vote. 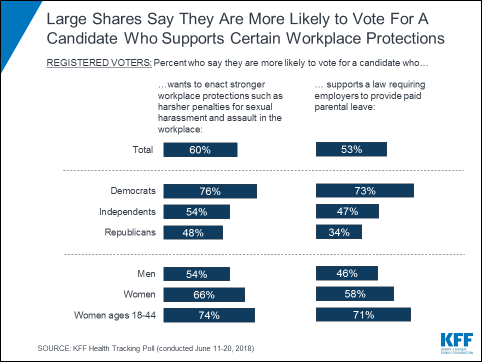 The international #MeToo movement working to raise awareness about sexual harassment and assault is also a touchstone for many voters. Half (49%) say they are more likely to support a candidate who is a strong supporter of the #MeToo movement, while just 7 percent say they are more likely to vote for a candidate who does not address the issues raised by the movement.