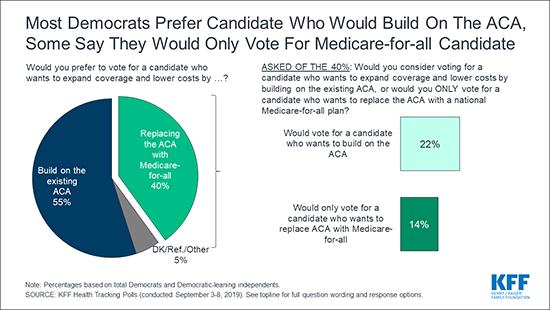 Among the public overall, a majority (53%) now view the ACA favorably, a slight increase since July (48%) and up significantly since before President Trump took office. Among Democrats, 84% now view the 2010 law favorably – an all-time high in nine years of KFF polling. The share of Democrats who hold favorable views of the ACA has increased 11 percentage points during President Trump’s term, up from 73% in February 2017.

Opinions towards both a government-administered public option that would compete with private health insurance plans and a national Medicare-for-all plan in which all Americans would get their insurance from a single government plan hold steady this month, yet large shares express some uncertainty about the differences between the two proposals. 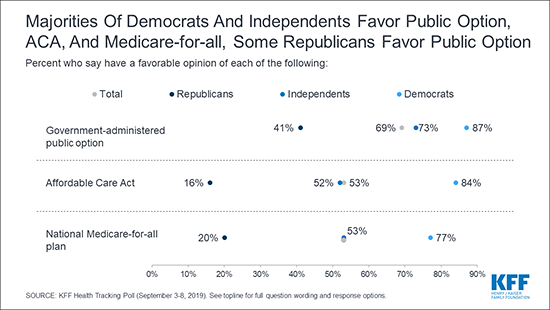 The public is divided in their perceptions of the similarities between a national health plan in which all Americans would get their coverage from a single government plan and a government-administered public option that would compete with private health insurance.

Large shares of the public say they have heard either “a little” or “nothing” about either a government-administered public option (64%) or a national Medicare-for-all plan (48%). 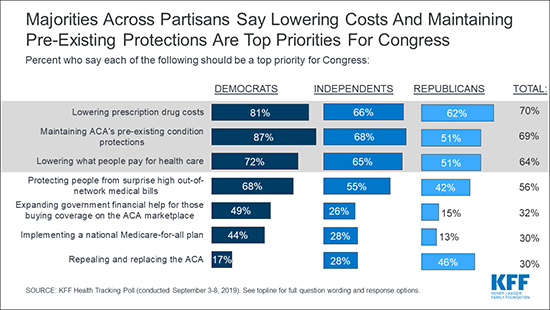 Congress is currently considering bi-partisan legislation to address surprise bills, which can occur when people with insurance inadvertently receive care from an out-of-network provider. The poll finds 78% of the public, and majorities of Democrats (84%), independents (78%), and Republicans (71%), support legislation to protect patients from paying the cost of such surprise bills.

A majority (57%) continue to support such legislation even after hearing opponents’ argument that it would lead to doctors and hospitals being paid less, though about one-fifth (17%) switch to oppose it after hearing the argument, increasing total opposition to 37%.

Designed and analyzed by public opinion researchers at KFF, the poll was conducted Sept. 3-8 among a nationally representative random digit dial telephone sample of 1,205 adults. Interviews were conducted in English and Spanish by landline (305) and cell phone (900). The margin of sampling error is plus or minus 3 percentage points for the full sample. For results based on subgroups, the margin of sampling error may be higher.