The survey estimates that the 4,400 assister programs operating nationally had an estimated 28,000 full-time staff and volunteers, suggesting each assister would have helped more than 370 people on average during the six-month open enrollment period that ran from October 1 through March 31.

The 2014 Kaiser Family Foundation Survey of Marketplace Assister Programs is the first nationwide assessment of the number and type of assister programs and the number of people they helped. It examines the kinds of issues assisters helped consumers with, their experiences with the enrollment process, and their thoughts for improving such efforts during the 2015 open enrollment period.

About one in eight (12%) assister programs said consumer demand for their help far outpaced their capacity throughout the open enrollment period. That share grew to one in four (24%) during the surge at the end of March as open enrollment ended.

Almost 90 percent of assister programs said that most consumers who sought their help were uninsured, and three quarters of programs say most struggled to understand health insurance terms such as “deductible” or “network service.”

Programs typically spent between one and two hours helping each consumer. Often, consumer questions about health plans couldn’t be answered by information posted on marketplace websites, and wait times for call-center assistance also slowed the process.

At least four out of five assister programs reported that most or nearly all the 10.6 million consumers they served sought help because of their limited understanding of the ACA, because they needed help understanding their plan choices, and because they did not feel they could apply on their own. 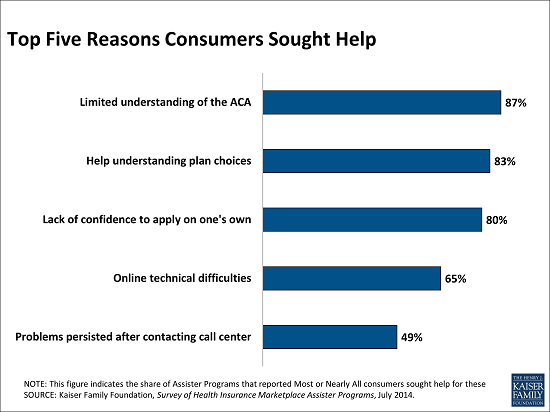 The survey was designed and analyzed by researchers at the Kaiser Family Foundation and was conducted online from April 24 through May 12 among assister programs nationwide, included navigators, certified application counselors, federally qualified health centers and other recognized programs; 843 out of 4,445 programs responded. The margin of sampling error is plus or minus 4 percentage points for the full sample.  For results based on subgroups, the margin of sampling error may be higher.